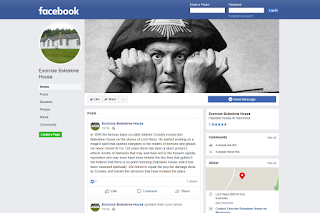 I've started a Facebook group called "Exorcise Boleskine House". The idea was inspired by a friend of mine on the platform called Jana. She suggested it following last night's HPANWO Show where I talk about Boleskine House in the News segment after the feature, see: http://hpanwo-radio.blogspot.com/2019/08/programme-334-podcast-gary-heseltine.html. Boleskine House is a single storey Scottish mansion which stands on the shores of Loch Ness. In 2016 it was partly gutted by a fire and a second fire in 2019 completed the destruction, see: http://hpanwo-voice.blogspot.com/2019/08/boleskine-house-burns-again.html. The house was bought by the famous occultist Aleister Crowley in 1899 so he could perform a magick spell called "the Abramelin Working". He was halfway through the spell, which takes several months to cast, when he received an urgent message from his solicitor announcing that some of his former fellow members from the Order of the Golden Dawn were going to sue him. The "Beast 666" therefore abandoned the spell half-finished and hot-tailed it to in order to sort out this legal mess. The spell was never continued which means there is an open portal to otherworlds at Boleskine House and has been for a hundred and twenty years. This I believe is the cause of much of its ghoulish reputation, including the two fires. The area needs to be cleansed spiritually by people who know properly how to do it. Hopefully this Facebook group will gather publicity and begin the project. See here for a link to the page; please like it: https://www.facebook.com/Exorcise-Boleskine-House-102719534428251/. The current owners of the property hope to restore the house; however it's not so much a repair as a rebuild now. The brickwork and foundations are still intact so it could be done given enough money. There will have to be completely new plumbing, wiring, roof, windows and plastering etc. In my view, there is no point beginning such a job until the exorcism project is carried out because the destructive spirits inhabiting the ruins must first be given license to depart.
See here for background: https://hpanwo-voice.blogspot.com/2008/07/beijing-olympics-2008-logo.html.
And: https://hpanwo-voice.blogspot.com/2018/01/ben-emlyn-jones-on-kev-baker-show-29.html.
Posted by Ben Emlyn-Jones at 18:32