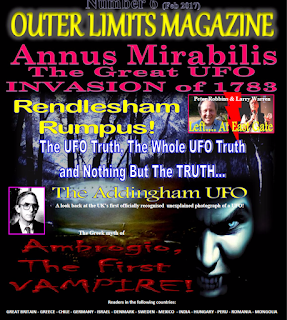 See here for essential background: http://hpanwo-voice.blogspot.co.uk/2017/01/is-larry-warren-fraud-part-4.html.
The campaign against Larry Warren has advanced into a new league. It has risen from the blogosphere and Facebook comments boxes into UFOlogy journalism. The latest issue of Outer Limits Magazine features four articles on the Rendlesham Forest Incident, and two on what I'm surprised no wise-cracker has yet christened "Warrengate". OLM is a fairly new publication, but it is holding a conference later in the year that I plan to attend. The first article is a simple editorial summary of the break up between Peter Robbins and Larry Warren that I talk about in Part 1 of this article series. It is illustrated dramatically with a ripped paper graphic between portraits of the two men. It doesn't speculate or judge the causes of this event. Peter still has not clarified his feelings and describes it as simply a personal issue. This is followed by an article by Philip Mantle entitled "The Rendlesham Rumpus" in which he assesses the contribution of Steve Longero. (See here for Philip's interview on HPANWO Radio: http://hpanwo-radio.blogspot.co.uk/2016/09/programme-206-podcast-philip-mantle.html.) Then there's a piece called "Rendlesham Responses" in which various people give their opinion, including John Burroughs, Adrian Bustinza and Nick Pope; though not Larry Warren for some reason. The ace of the pack is kept till last. The magazine has published an article by Sacha Christie called "The UFO Truth- The Whole UFO Truth and Nothing but the Truth"; for some reason this time she has failed to come up with one of her usual puns. Sacha provides a précis of her project and pins the reader's hopes right on the mainmast of her six hundred pound so-called "analysis" of Larry's handwriting. I explain why this is unlikely to be successful in previous articles in this series. Source: https://issuu.com/scoop123/docs/olm_issue6.

Sacha's article is calm and professionally written. Its tone is totally unlike that she often uses on her blog. She places the blame for all the bad feeling in the UFO community solely on the heads of those who do not accept her supposed evidence against Larry. She and her cohorts portray us as stubborn and dogmatic... when they're being polite to us. It's important to remind readers of Sacha's OLM piece that this is the person who carried out an unprovoked personal attack against me, hitting me where it hurts when she brought up my discharge from the NHS, see: http://hpanwo-voice.blogspot.co.uk/2016/07/is-ben-emlyn-jones-happy-slapper.html. She also grossly misrepresented me in a more recent discussion about a previous article in this series. She wrote: "...But conspiracy theories rage! As part of Ben Emlyn-Jones' special investigation he... demands to know who Barry Greenwood really is and calls for the internet to get a hold of him. Nice... Set the internet on a man in his seventies; way to go Ben." And she sent this to Barry... or rather she claims she did:

Source: http://sacha-christie-infomaniachousewife.blogspot.co.uk/2017/01/barry-greenwood-issues-statement.html. Now, let's look at what I actually said that warranted accusations of incitement to harassment and gangstalking: "I urge anybody reading this who knows Barry Greenwood to get in touch with him and ask him to confirm or deny what Sacha has said." See: http://hpanwo-voice.blogspot.co.uk/2017/01/is-larry-warren-fraud-part-2.html. And now let's have a look at the threatening abusive poison pen letter I sent to Barry myself:

Barry has not answered my email, nor anybody else's. It appears he is hiding out in a cabin in the woods and only communicating with Sacha Christie.

One thing I've noticed about Sacha when she began her anti-Larry operation is that all the allies she targeted for recruitment are relative newcomers to the UFO/paranormal/conspiracy scene. She didn't bother with people like me. I've known her for ten years and I've seen her do this kind of thing before. I believe her "time and motion study" explanation for the RFI was proposed simply to stir up controversy and get her attention. She is like a chameleon. She can be very complimentary and charming to people when she sees them as useful to her and turn immediately into a caustic antagonist against those who resist her. She knows that her indoctrination will not work on me. What I've just said is not intended to be a judgement of Sacha Christie's character, just a commentary on the effects of her behaviour. In her OLM article she insists that her "crusade" (her words) is not a "truth mob". Here she is signalling to me. This is a term I coined. Is Warrengate a Truth mob? Listen to this HPANWO Show from 105 minutes and make your own mind up: https://www.spreaker.com/user/benemlynjones/hpanwo-show-219-2016-review-of-the-year.

The good news is that Sacha's pronouncements are not going unanswered. In fact here's an update from :
"UFO TRUTH MAGAZINE STATEMENT:
In issue 10 of UFO Truth Magazine I highlighted an image allegedly found on one of Larry Warren’s FB albums that seemed to show one, if not two anomalies above the A10 aircraft shown in the picture.
On one of Larry’s Facebook friends, Robert Martins, began a string conversation about the A10 photo. He told Larry that he had found an object in the sky just above the A10. He downloaded the image and then looked to enhance it with photo enhancing software.
To his surprise, he found that there was an unknown in the sky above the A10, what looked like a UFO, an unidentified flying object.
When he enlarged the anomalous object he was amazed to see that it appeared to be a structured like object.
Martins then placed his Photoshop enhancements onto Larry’s FB page and other people were then able to view and comment on them.
At 2219 hours Larry responded:
'No shit! Wow thanks Robert Martins………. who knew?????????????? Damn.'
When Larry looked at the object’s shape he was amazed to find that it was the same as the object he’d seen at Capel Green thirty-four years earlier on the third night of UFO activity of the Rendlesham Forest Incident.
Larry Warren: 'Its the same shape as what I saw in late December................Well blow me down.'
One of the people who saw Martin’s image was Rich Dimascio who decided to examine the unidentified object even further and posted his enhanced image on the same FB string conversation taking place with Larry and Robert Martins.
This unexpected development led Larry to telling me about what had happened and resulted in the article that I wrote in issue 10 of the magazine.
Note: At the end of the article I stated: 'I would stress at this stage that further investigation needs to be done i.e. an examination of the original photo and negative (if available) but nevertheless the early indications point to an amazing new development in the Rendlesham case thirty-four years on! GH.'
NEW DEVELOPMENT
I have been informed by Sue McAllister, Larry’s ex-wife, that following a search of Larry’s home the original A10 printed photograph has been found.
As a result I have advised Larry and Sue to:
1: Get a 600 dpi resolution scan image of it.
2: Send that scan, if not the original photo, to Bruce Maccabee, the retired navy photographic image analyst for evaluation (Note - Maccabee had evaluated the photo seen on the FB string and had endorsed it as being genuine).
I await news of the results.
GH."
There is more information that I'm aware of that I cannot currently reveal, but rest assured Larry and his defenders, including myself, are striking back. Another researcher, Russ Kellett, has also stood up for Larry regarding Sacha's claim that Larry tried to trade fraudulent music memorabilia.
See here for the next part: http://hpanwo-voice.blogspot.co.uk/2017/02/is-larry-warren-fraud-part-6.html.
Posted by Ben Emlyn-Jones at 18:39

Nonetheless, when a gentleman finds himself being overwhelmed by the urge to reach for the scissors and Pritt Stick every time they see a photograph of John Lennon or Stevie Ray Vaughn, it does tend to negatively impact upon their credibility in general.

Thanks Ben for all the information you have shared so far, its appreciated.

Hey if Larry'sis not telling the truth he started out awful early on. I have known him well for several decades and have never caught him in a lie. I first sway him in 1984(5)? talking on the outside steps of the high school in Brewster, NY where a town hall meeting was being held on UFOs. He told the same story he tells now. He seemed remarkable to me than. It is remarkable now. . .Everyone wants to be an arm chair UFOlogist. Its so easy to come up with an opinion. A bit more difficult to do some actual leg work.

Here is the most complete interview ever done with Larry -- it was on the show I co host with Tim Swartz on KCORradio.com You can find the archives by going to Mr UFOs Secret Files on YouTube. Most everything else is BS - lol
https://www.youtube.com/watch?v=a8QScAUN-pE&t=3

its been a lot of work....oh no not me reading all these parts and docs, you Ben and others have been doing so much work. And if i may say, it stands as a nice set of reading for the visitor...all the various viewers and differing opinions,of course. A Marvelous Exposition. But for those like myself on the outer border just now seeing all this in 2019 ( an excuse for being late ... " I been away" won't work here...I am not in Time Travel ) it is a pleasure to see some who work hard to be heard or seen (read) .