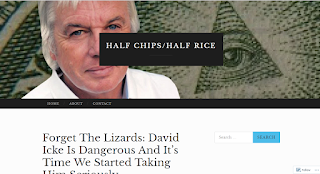 The thing about jokes and witticisms is that they have a time limit on their power to amuse. There are only so many occasions you can use the hyperbole "couldn't organize a piss-up in a brewery" to describe a person who lacks management skills before it becomes a cliche. What's more if you are very experienced at something, telling others that you've "been there, done that and got the T-shirt" doesn't make them smile and regard you as a skilled wag anymore. However some people don't understand that. Some people will repeat the same platitudes over and over again until they cross the line from maxim to monotony. Case in point: a blogger called Marlon Solomon whose website is called Half Chips- Half Rice. A few days ago he posted an article with the rather long-winded title: Forget the Lizards. David Icke is Dangerous and it’s Time We Started Taking Him Seriously. He gives a brief biography of David Icke and then describes David's philosophy as being modern neo-fascism mixed with that of the American Militia movement, conspiracy theories of the and Russian state propaganda. The fact that Solomon regards Veterans Today as "neo-Nazi" does make me wonder how much research he has done. VT is not so much neo-Nazi as neo-Crazy. Some of its stories make HPANWO sound like Take a Break. Then Solomon says: "Icke is on a mission to educate and free the subjugated masses; he offers hope and freedom from the grip of our Satanic blood-drinking rulers. He assures us that if we can tune into the 'Truth Vibrations' we can rise up as one against the reptilian overlords... The problem is that these overlords are Jewish... Well of course they are."

So, it looks like we're going to have to go through this rigmarole yet again. David is going to have to defend himself, once more, from the accusation of anti-Semitism that he first did in the 1990's. He's going to have to explain, like he's explained a thousand times already, that Jews are completely innocent when it comes to the New World Order conspiracy. He'll tell you that one of his books was sponsored by a Jewish friend of his. He'll tell you that was set up by the Rothschild family for their own personal criminal use, not so that Jews could take over the world. He nominates as many gentiles as Jews of being reptilians. He'll repeat that the Protocols of Zion are not really Jewish and that's why he renamed them "the Illuminati Protocols" etc etc etc. Is this ever going to end? Will there ever come a time when the penny finally drops for everybody? But wait! Maybe our enthusiastic author Mr Solomon has some new evidence!... No. There is absolutely nothing factual in the article that has not been said before by others for the entire two decades that David has been warning people about the New World Order conspiracy: criticism of Israel= hatred of Jews, reptilians= Jews etc. What is exceptional in Solomon's piece is the rhetoric. He really is a very special snowflake who has been well-and-truly triggered. "David Icke is a Neo-Nazi pin-up... The David Icke Forum is a crucible for extreme conspiracy theorists to discuss evil plots and their machinates... ...cauldron of hatred whipped up by these frenzied maniacs who congregate in the cesspit of Icke's website..." He also links to the recent case of David losing in the lawsuit against him brought by Richard Warman, see: http://hpanwo-voice.blogspot.co.uk/2015/03/david-icke-loses-lawsuit.html. Solomon repeats a blatant lie by somebody called Ori Golan: "A person who writes such things and makes home videos titled The Lizards and the Jews... is not just a nut job; that person is anti-Semitic." The title refers not to any publication of David's, but instead to an insipid documentary about him by Jon Ronson, see: https://www.youtube.com/watch?v=P2ypYcZ7qfw. Mr Solomon claims to have researched David Icke in depth, in which case he would surely know this. In that case why does he cite this falsehood? To his credit, Solomon says near the end of his article: "I’ll defend Icke's right to say what he wants..." which is more than some others are willing to do. David is appearing on stage in next Saturday (I went to his live show in last year; see background links below). has a large Jewish community that Marlon Solomon is a part of. He says that he "cannot defend Jewish community leaders and anti-racist organisations who remain passive in the face of overt anti-Semitic grandstanding in their community." Well perhaps these Jewish community leaders have looked at David's work in more detail and realized that David is innocent of the accusations Solomon levels at him. Source: https://marlonsolomon.wordpress.com/2017/01/04/forget-the-lizards-david-icke-is-a-fascist/. The truth is very different and I'm the first to admit how bizarre it sounds. A non-human intelligence is currently operating on planet earth. This is what David is talking about. When he says lizards he literally means lizards.

Few conspiracy theorists these days avoid the charge of anti-Semitism and ninety percent of the time it is unwarranted. Anti-Semitism is very similar to racism, homophobia and misogyny in this new Orwellian world, in that you can "be" it even when you are "not it"... Nope, that doesn't make sense to me either. I can sympathize with David because Trystan Swale has just launched his new website in which your humble author is very much the focus of attention: http://www.trystan.net/. He hasn't posted anything here that he hasn't said before. He is still carefully avoiding the direct legally-libellous statements that first caused me to warn him to cease and desist, see here for background: http://hpanwo-voice.blogspot.co.uk/2016/08/trystan-swale-and-my-perceived-racism.html, but he does add that I'm betraying my commitment to free speech by threatening him with legal action. As if he doesn't know that the right to express any opinion does not include the right to defame somebody's character. I'm seriously beginning to wonder if Trystan has some kind of bi-curious schoolboy crush on me... Sorry, Trystan, but I only like girls. I have placed a comment on Marlon Solomon's article: "This is utter drivel, and it's not even original. It first came up in the early 90's and was swiftly demolished, so why are you trying to reassemble it again? David Icke states very clearly and comprehensively that Jews are not to be blamed for any of the conspiracies he talks about." The comments box is moderated, but he published it without any fuss. Let's hope the readers of the article all see it.
See here for more background: http://hpanwo-voice.blogspot.co.uk/2014/12/trystan-swale-on-ben-emlyn-jones.html.
And: https://hpanwo-tv.blogspot.com/2017/06/jews.html.
And: http://hpanwo-radio.blogspot.co.uk/2016/05/programme-188-podcast-jews.html.
And: http://hpanwo-tv.blogspot.co.uk/2016/07/david-icke-live-2016.html.
Posted by Ben Emlyn-Jones at 10:49

A lady in Israel may be worth interviewing. She is a Brit but lives mainly in Israel. Take a look at this interview. I cannot qualify what she says at the moment, but doing my checking. https://www.youtube.com/watch?v=TozWkSExU5E

Thanks, Jewels. Will have a watch

I've been following David's work for nearly twenty-five years and I find him interesting and informative and thought-provoking. I heard him speaking in Bournemouth in 1993 and in Belfast in 1994. My mum even bought me "It doesn't have to be this way" for Christmas way back in 1990 or 1991. I follow the work of many other people - Noam Chomsky, John Pilger, Naomi Kline, Graham Hancock, Robert Fisk, Ha-Joon Chang, George Galloway, Owen Jones, Eva Bartlett, Vanessa Beeley, Mahdi Darius Nazemroaya, Lizzie Phelan, etc, etc, etc.

Booseyhey, I came across David in 2000. I was already becoming conspiratorially-aware at the time and David really resonated with me. i read as many of his books as I could get hold of