At the Awakening of 12 Strands Premiere 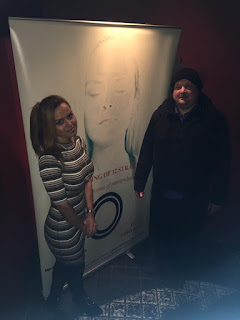 Last Sunday evening was bitterly cold and I wrapped up warmly as I headed for the big screen London premiere of Sandra Daroy's film Awakening of 12 Strands. See here for essential background: http://hpanwo-voice.blogspot.co.uk/2017/01/awakening-of-12-strands-premiere.html. This was an unusual situation because, for the first time, I was accompanied by my daughter Louisa. She is almost twenty-two years old and has never been to any of my conspiratorial/UFO/paranormal gatherings before. In fact as a teenager she scoffed at most of what I did, calling it "that David Icke stuff!" This was her generic moniker for everything HPANWO-esque, regardless of whether David Icke was associated with it or not. Maybe it was just a phase she was going through... being a teenage girl in other words. As she has matured her attitude has changed. I've had some remarkable conversations with her over the last couple of years and she's even started reading HPANWO occasionally. The cinema is a very Bohemian-looking Victorian conversion in called the The Horse Hospital. is full of these kinds of venues, specializing in arthouse flicks and independent cinema. It's not the first time I've been there. I previously went there to a showing of Mark Pilkington's Mirage Men, see: http://hpanwo-voice.blogspot.co.uk/2014/02/mirage-men-film.html. Its facilities are rudimentary, but it has a nice atmosphere. Louisa and I arrived an hour early and went to the pub next door; and, one by one, my friends arrived, including Colin Woolford, Miles Johnston and, of course, the director Sandra Daroy herself. As always it's wonderful to see them. As I said to one of them: "This is the only time I can have conversations like this!"

Along with my friends were some of the cast of Awakening of 12 Strands. Despite being very low budget, Sandra's film is richly complex and has a large number of characters. I recognized a few of them because I have seen a preview of the film. We all sat down with a glass of wine and the event began. Sandra had given me the job of introducing the film. I was a bit worried because I had not had time to prepare anything; this week has been a bit hectic. Luckily the premiere began late so my speech was cut down in length considerably. I had to ad-lib and hopefully channel my inner orator. It worked and I did a fairly good job. It's been filmed by Miles for the Bases Project, see: (coming soon). I introduced Sandra to the audience and then she came up and gave a speech; and then we rolled the movie. It was slightly updated from the preview I had seen. It had a few extra scenes and the sound quality was improved. Sandra is a perfectionist who has yet to be completely satisfied with the product she has created. If anything I would say that she is probably over-critical of her own work and her modesty is misplaced. Like all artists, she'll get quite enough denigration from the critics before her career is done, see: http://hpanwo-voice.blogspot.co.uk/2008/06/critics.html; and she should not add to it herself. I was very impressed by Awakening of 12 Strands. Sandra not only directed the film, but she edited it, and did all the production design herself. Although our styles are completely different, Sandra's film covers a lot of the same themes as my book Roswell Rising- a Novel of Disclosure. After the showing was over everybody gave a big round of applause and we took a few photos to commemorate the occasion. Then it was back over to the pub and Sandra had a well-earned glass of wine. Louisa and I had to leave early because we had to get home to . As I walked away from the pub I said to her: "So you survived your first ever UFO/conspiracy/paranormal event. How was it?" She replied: "Good, and not a tin foil hat in sight." If you want to watch Awakening of 12 Strands you can stream it online for just £3.84, see: https://vimeo.com/ondemand/awakeningof12strands. Sandra is currently looking into other distribution options.
See here for background: http://hpanwo-voice.blogspot.co.uk/2015/11/incontrovertible-premier.html.
And: http://hpanwo-tv.blogspot.co.uk/2017/01/collateral-beauty-film-review.html.
And: http://hpanwo-tv.blogspot.co.uk/2013/07/world-war-z-more-real-zombies.html.
Posted by Ben Emlyn-Jones at 17:55

Excellent Ben. Glad you spent time with your daughter on the day. Xylomet

Thank You Ben for hosting the event. Best Regards