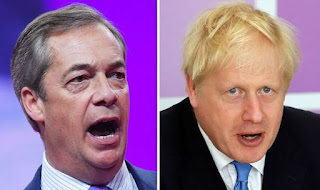 A few days ago there was a by-election that has changed British politics forever. The turmoil that the nation was thrown into in 2016 has finally come of age. The Brecon and Radnorshire constituency is a rural one in mid-east and after the last general election, in 2017, the Conservative Party held it fairly safely with a majority of 18%. However, the incumbent MP, Chris Davies, was convicted of political fraud as a part of the expenses scandal and was recalled from his seat. The Liberal Democrats have now snatched the constituency from the Tories with a massive 12% swing. How did this happen? Obviously Mr Davies has discredited himself by his criminal deception and many might suspect that his constituency party collaborated with him in some way, but the real difference can be seen the candidates list; it is very short. The Green Party and Plaid Cymru specifically chose not to field candidates in that seat so that their usual electorate would back the Lib Dems. Why? Because of Brexit. The Greens and Plaid are two of the parties favoured by Remainers and the Lib Dems take the hardest pro-EU line of all, so it is obvious Plaid and Green voters will switch to the Lib Dems as a second choice. (As I've said before, I used to support Plaid; and their federalist stance makes their original mandate a sick joke. Their original name was Plaid Genedlaethol Cymru which means "Nationalist Party of Wales", see: https://hpanwo-voice.blogspot.com/2014/05/plaid-cymru-and-eu.html.) The result reduces the Tory majority in the House of Commons to just one. This means the government are going to find it far harder to push their own bills through and will make an early general election, before the scheduled one in 2022, more likely. The Conservatives have accused the Lib Dems of "playing dirty"; however there is no rule prohibiting in what they did. Source: https://www.bbc.co.uk/news/uk-wales-politics-49200636. The good news is that there is not time, realistically, to call a general election before the Halloween Brexit Day. The bad news is that with this new unofficial anti-Brexit alliance, it will be harder for the new Prime Minister, Boris Johnson, to have his way with the Brexit process and many more opportunities will emerge to add another delay or even scupper the Brexit timeline completely. All is not lost though; there is a solution, and it was one US President Donald Trump suggested in his congratulation speech to Johnson, see: https://www.youtube.com/watch?v=M-tNSDPH_Dc. He is informally suggesting a pro-Brexit coalition between the Conservatives and Nigel Farage's Brexit Party to challenge the anti-Brexit one. So what kind of man is Boris Johnson really? Is he the "Britain Trump"? This is the question I asked on this HPANWO TV livestream: http://hpanwo-tv.blogspot.com/2019/07/new-prime-minister-livestream.html. How Boris responds is going to be a test of his sincerity. Will he be willing to affiliate himself to Farage, even if only temporarily? If he doesn't then he is handing the country back to the centrist Remainers; that is in no doubt at all. They will wangle a general election as soon as they can and you will probably see a Labour- Liberal Democrat alliance with a manifesto of cancelling Brexit, for which they will have already engineered a delay. Without Farage's help Boris cannot defeat them. If he resists any collaboration with Farage then it can only be because Boris is either a fool or a fraud, a fake Brexiteer whose job it is to inspire false confidence and distract people away from any genuine solution.
See here for more information: https://hpanwo-tv.blogspot.com/2019/03/why-2016-matters.html.
And: https://hpanwo-tv.blogspot.com/2019/06/trump-in-britain.html.
And: https://hpanwo-tv.blogspot.com/2019/01/brexit-deal-decision-livestream.html.
Posted by Ben Emlyn-Jones at 13:32