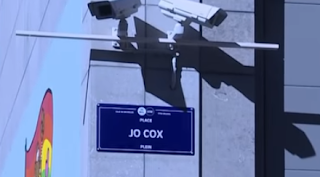 The city of is the capital of the European Union and it has chosen to honour the memory of one of its most dedicated political loyalists by renaming a location after her. Place Jo Cox, translates from the French as "". Jo Cox MP was the member in the House of Commons for the constituency of Batley and Spen, but before she entered parliament she lived in . is near the Ancienne Belgique concert venue in the heart of the city which Ms Cox regularly visited. Appropriately there are some Orwellian CCTV cameras above the sign. There was a grand unveiling ceremony involving the mayor of Brussels, Labour Leader Jeremy Corbyn and Jo Cox' family who have always been very vocal and media friendly. Source: https://www.bbc.co.uk/news/uk-england-leeds-45655720. is just one and a quarter miles from the European Parliament. Jo Cox MP was supposedly shot dead in 2016 just a few days before the Brexit referendum. A man called Thomas Mair was convicted of her murder, but there are numerous anomalies relating to the case that make me question outcome of the trial; see: https://hpanwo-radio.blogspot.com/2016/12/programme-214-podcast-trial-of-thomas.html. Since that HPANWO Radio show was broadcast there have been updates that are covered in this episode of Richplanet TV: https://www.youtube.com/watch?v=HEIoLftYYLM. I have a feeling that at some point Jo Cox will be posthumously awarded the Charlemagne Prize, also known as the Kalergi Prize. This award is named after Richard Count von Coudenhove-Kalergi, the so-called "father of the European Union" and its first winner. It is given to people who have served the cause of creating a singular continental superstate in . Other laureates include Tony Blair, Bill Clinton, Angela Merkel, Emmanuel Macron and Pope Francis.
See here for more information: https://hpanwo-voice.blogspot.com/2018/07/army-on-standby-for-brexit.html.
And: https://hpanwo-voice.blogspot.com/2018/07/new-brexit-crisis.html.
And: http://hpanwo-voice.blogspot.com/2017/03/article-50-at-last.html.
And: http://hpanwo-tv.blogspot.com/2017/03/richard-dawkins-patronizing-git.html.
Posted by Ben Emlyn-Jones at 20:30

You are an amazing Conservative. When is the final book coming out, I can't blooming wait?

I agree with Richard D Hall that Thomas Meir was wrongly accused of Jo Cox's death and was very likely set up as a patsy and using an imposter to pose as him, and probably carry out her assasination. I agree with Hall also that her death was probably real and not fake as some seem to suggest.

Anon, who said it wasn't?