Army on Standby for Brexit 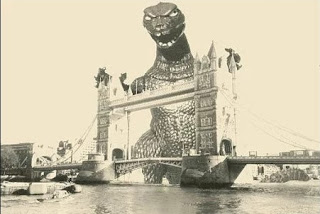 It has been reported that the Ministry of Defence is "dusting off" contingency plans to deal with national crises as the likelihood of a no-deal Brexit grows. Army vehicles may be deployed to deliver food and medical supplies to people in vulnerable locations. The military operations that were intended to maintain the infrastructure in the event of a nuclear attack, hurricane or meteor impact will have to be hastily adapted so that the country can survive the Armageddon that Brexit will unleash! Source: https://news.sky.com/story/army-on-standby-to-handle-food-and-medicines-shortages-in-event-of-no-deal-brexit-11453093. When I first heard this story I could hardly believe it was not a spoof. Then I joked on social media that the army would be pretty useless against Godzilla when he rises from the oceans. Surely even the most blinkered and die-hard Europhile will have the wherewithal to see through this preposterous charade. The phrase "Project Fear" has taken on an extreme new meaning with this most transparent piece of theatre. Ever since the EU Referendum was suggested the call has gone out that if it leaves the European Union, Britain cannot survive economically. The very same prophesies of doom were no doubt shouted from street corners in the American colonies, Ireland, India and many other nations occupied by foreign powers before they achieved their independence and became very successful sovereign states. I expect there are those in who are equally terrified; terrified into submission by the unknown and of change, and government propaganda of course, see: https://hpanwo-voice.blogspot.com/2017/10/independence-for-catalonia.html. This article is another example: https://www.independent.co.uk/voices/brexit-free-movement-visa-registration-fees-paperwork-travel-budget-holidays-a8449426.html?utm_term=Autofeed&utm_campaign=Echobox&utm_medium=Social&utm_source=Facebook#Echobox=1531747211. Notice the future tense, how it says "will" not "could be"? Do you not think the airline industry will want a solution? EU-based carriers will not take kindly to regulations preventing them arranging the budget flights that they have previously enjoyed and will join forces with anybody who wants to find a solution. The only serious economic threats to an independent are those engineered deliberately as acts of sabotage by pro-EU zealots in government and their remoaner accomplices. The British people showed enormous courage in 2016 by voting to leave the oppressive continental dictatorship that we were tricked into joining by lies and gradualism. We must now pluck up more courage so as not to be intimidated into giving up our hard won freedom by heartless, brainless, gutless politicians who live off finders fees from .
See here for more information: https://hpanwo-voice.blogspot.com/2018/07/new-brexit-crisis.html.
And: http://hpanwo-tv.blogspot.com/2016/06/vote-leave-2-count.html.
And: http://hpanwo-tv.blogspot.com/2016/06/brexit-reality.html.
And: http://hpanwo-tv.blogspot.com/2016/04/david-camerons-leaflet.html.
And: http://hpanwo-voice.blogspot.com/2017/03/article-50-at-last.html.
And: http://hpanwo-tv.blogspot.com/2017/03/richard-dawkins-patronizing-git.html.
Posted by Ben Emlyn-Jones at 16:46

The MSM stuff does indeed look like 'project fear' meanwhile the official line states no such plans exist. PP.

Ben, what do you think of the Lexit arguments? All the socialist parties are for Brexit. All of them - CPGB, TUSC, SWP and others, albeit for different reasons to the right. Ceding Brexit to the hard right was a big mistake by the British left in my opinion. Any thoughts? Thanks, Keith.

Just to say I'm fascinated by this Ben. How much is true what they say and how much alarmism? Wow I had no idea that the left wing socialists backed Brexit. Checked on Google what Keith said and he's spot on. Seems it's the liberal left and Blairites who are the remoaners. Cheers.

It may not be well known but industry standards (known as British Standards) in the UK, covering household plugs to construction projects and everything in between, are far more advanced than anything the EU states can produce; indeed, the British Standards are routinely adopted in the absence of local standards. The lesson being: there should be no fear of Britain becoming independent.

Keith and Jordan. There is indeed a left-wing Bexiteer contingency, mostly "old left" type people, Tony Benn, trade unionists, the original communist party etc. Jeremy Corbyn used to be a part of this which is why I'm disappointed that he suddenly became a remoaner when he got the Labour leadership. He is not above pragmatism and Realpolitik.

True Laurence. I saw a great meme yesterday about how successful Switzerland is as an independent state.

Hi Ben, sorry but I disagree on "old left" as I would hardly call the SWP "old left". Not that I support them particularly. I think you're falling for tabloid myths here. The George Soros following global liberal-left of the old New Labour/Blairite wing were and are an aberration. Socialism is not old but very much young and active. More young people now in the UK describe themselves as socialist than ever before. Not all young people are remoaners either, far from it. Just because capitalism is now virulent doesn't mean that socialist ideology has had its day.