Another UFO Crash in Antarctica 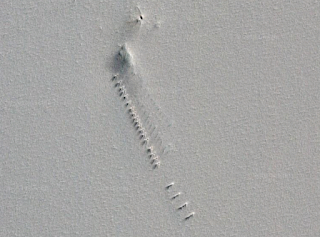 In April 2015 I reported on a possible UFO crash in , see: https://hpanwo-voice.blogspot.com/2015/04/crashed-ufo-in-antarctica.html. Now another of these alleged events has occurred. The alert comes from Courtney Brown's Farsight Institute in which he analyzes the Google Earth image of you can see above. It shows a row of twenty-two X-shaped structures arranged in a row about a mile long. Brown claims that these are supports holding a fabric cover designed to keep the ice and snow off an object that was buried in the ice cap until being dug up by government scientists. This operation began in 2013 and the object is still there; it is too big to move. Brown is certain that it is an alien spacecraft. His report includes detailed sessions from a team of four remote viewers. Source: https://www.youtube.com/watch?v=Df2lbR4trco. I take the idea of remote viewing very seriously and indeed so do the CIA, see: https://hpanwo-voice.blogspot.com/2013/07/the-secret-life-of-uri-geller.html. However, remote viewing varies in quality. I don't have enough information on the team yet to verify their reports. There is no additional evidence either. The Google Earth image is not detailed enough to tell for sure what it depicts. The location of the supposed crashed UFO is next to Kohnen Station, a German base located on the continent at the grid reference 75 0'46.98 S, 0 4'52.71 E. The website for the base is active. It includes blogs by the twenty scientists who live there carrying out work on climatology, biology, geophysics and glaciology. This work appears to have been carrying on as normal during the last six years, see: https://www.awi.de/en/expedition/stations/kohnen-station.html. We need to be wary; it was only a few months ago that this over-hyped story was published in the mainstream media, see: https://www.express.co.uk/news/weird/927435/UFO-alien-youtube-aliens-proof-google-earth-secureteam. At the same time, is very much an "out of sight, out of mind" location, see the background links below. It is certainly possible that secret operations of all kinds go on there. I will keep an eye on this story for more information.
See here for background: https://hpanwo-tv.blogspot.com/2016/09/jack-of-antarctic-rip.html.
And: https://hpanwo-voice.blogspot.com/2016/09/obama-in-antarctica.html.
And: https://hpanwo-voice.blogspot.com/2016/12/more-pyramids-in-antarctica.html.
And: https://hpanwo-voice.blogspot.com/2012/02/lake-vostok-breached.html.
Posted by Ben Emlyn-Jones at 20:56

Is this At the Mountains of Madness, mate?
New book soon I hope.

Not read that, Danforth.

Steve, what do you mean? Were his team RVing South Georgia?