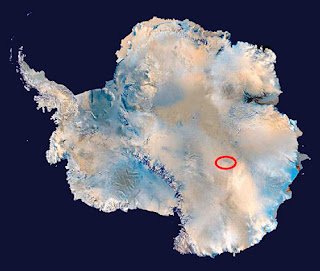 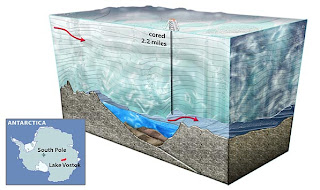 Thanks to several members of the Facebook Exopolitics group for discovering this.

I’ve written about Lake Vostok before and talking to my friend “Jack” has made me wonder if there’s more to this story than meets the eye, see here for important background: http://hpanwo.blogspot.com/2008/07/jack-of-antarctic.html . Maybe the reason the drilling team at the base is out of contact with the rest of the world is because they’ve found something in the lake the rest of us are not allowed to see: Hitler’s body? A UFO... Now my imagination is running wild! But Lake Vostok is huge, 3000 feet deep and the size of Northern Ireland; that’s a lot of water! Maybe what the authorities are really scared of is that nothing remarkable at all will be found down there. They might then discover that the East Antarctic ice sheet is not as old as was previously thought. Rather than being a stable structure that has been there for over 40 million years, it actually comes and goes every million years or so without affecting the sea levels very much. This would put a dampener on the Global Warming scarefest.

See Kim Stanley Robinson’s novel Antarctica for a rundown on the “Dynamist vs Stabilist” scientific controversy: Why is it that when scientists disagree they become so hostile and hateful with each other about it?

I wonder why the water of Lake Vostok is liquid and not frozen; maybe volcanic activity keeps it warm enough to stay molten.
Posted by Ben Emlyn-Jones at 21:35