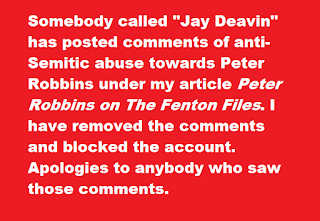 There are some crimes that are so heinous that the moment somebody is accused of them, regardless of the circumstances, most other people will bolt from them as if they've been diagnosed with the plague. Few will even suggest the possibility that the accused might be innocent, even if the evidence says that they are, because they are afraid of being contaminated by the scourge of the accusation. The worst of these crimes is probably paedophilia, which is why Miles Johnston's detractors chose it, see: https://hpanwo-voice.blogspot.com/2018/03/bases-open-lines-march-2018.html. Just one notch up from that is racism and its associated bigotry. This has been used to smear me before, see the background links; but never so badly as it has this week. Somebody posting from an account called "Jay Deavin" wrote anti-Semitic and homophobic abuse against Peter Robbins on the Facebook post for my article Peter Robbins on The Fenton Files: https://hpanwo-voice.blogspot.com/2018/10/peter-robbins-on-fenton-files.html. It was more than two days before I knew the comment was there. I was not online much because I was busy with other things and by the time I got to log in, it had scrolled over the horizon of my Facebook feed, like so much inevitably does for almost all Facebook users. A few people saw it and did not alert me because they wanted it to be there for as long as possible for the purpose of their attack against me. I know this because somebody who wrote to me after it went public and let it slip that they had screen-captured the comment soon after it had been made. Why didn't they warn me then? When somebody else did tell me, naturally I deleted the comment and blocked the account immediately. I posted the above tableau on Facebook and in all the comments boxes of the post. I don't know what the trolls are saying about me because I have them all blocked of course; but my best guess, based on people's responses, is that they are trying to convince as many people as possible that I wrote that comment myself. A number of people have unfriended or blocked me. I don't know exactly how many. Four at least that I'm aware of and probably others I have not noticed yet. These people have disowned me without a second thought. They have immediately believed the word of the trolls as Gospel and not asked to hear my side of the story. I'm terrified by the prospect that these people could actually be called up for jury service! It's a sad fact, but the trolls know that they swim in a sea in which weakness and indifference are a bottomless trench, and they are diving deep to suck up every drop they can. I'm pleased to say that at the same time, many other people posted comments and sent me messages of support. I'm extremely grateful for that. This is without a doubt the worst troll attack I've heard of since the troll crisis began two and a half years ago.

Peter Robbins himself refers to the incident in this radio show: https://paranormalukradio.podbean.com/e/inside-the-outer-limits-ufologist-peter-robbins/. Somebody wrote to me and suggested I apologize to Peter personally. Actually Peter is Jewish, but he has not seen the comment himself; he can't have because I've blocked him too. My timeline visibility is strictly friends-only. This was not something I wanted to do. I was originally having a rational and civilized private debate with him on Skype about Larry Warren, but then I saw he had unfriended me. I wrote to him and asked why, and he didn't reply. I always block people who do that. My statements against Peter have always been ones based on evidence and logic, for example see: http://hpanwo-voice.blogspot.com/2017/06/the-larry-warren-controversy-part-16.html. Despite our differences, I would never initiate a personal attack against Peter Robbins, especially with such a low punch as anti-Semitism. Like most people, I have thousands of accounts on my friends list and most of them are people I have never met or spoken to face-to-face. It's inevitable that some of those accounts will be bots, sock-puppets, clones or spies for the trolls. I can always delete every account I'm not sure of, but that will mean casting off thousands of innocent people as collateral damage. That's not fair. "Jay Deavin" was one of these. I have been contacted by two people who have had dealings with this account and, based on what they've told me, I am about fifty percent sure that this account is a front for the anti-Larry Warren trolls, and I think I can guess which member. I can't prove this, but there's an even chance I'd say. This would make the anti-Semitic and homophobic assault on Peter Robbins a false-flag operation, a mini-9/11. Do you really think they wouldn't stoop to that level? Also, as somebody with the average number of Facebook friends, I cannot police all their activity unless I give up work and sleep to monitor my feed twenty-four-seven. This situation means that I cannot guarantee that this will not happen again. All I can do is what I have just done; delete and block as soon as possible. If that's not enough for some people, then there's nothing more I can do except say goodbye.
I have adapted this article into a HPANWO Radio show: https://hpanwo-radio.blogspot.com/2018/10/programme-304-podcast-what-really.html.
See here for background: http://hpanwo-voice.blogspot.com/2016/12/is-larry-warren-fraud.html.
And: http://hpanwo-radio.blogspot.co.uk/2017/05/programme-236-podcast-larry-warren.html.
And: http://hpanwo-tv.blogspot.co.uk/2017/05/larry-warren-in-rendlesham-forest-2017.html.
And: https://hpanwo-tv.blogspot.com/2017/06/jews.html.
Posted by Ben Emlyn-Jones at 19:15

Hi Ben, the antisemitism smear is out of order. I know you've already said in a blog on Jews that you believe they do not control world events as argued by many in the Truth movement. However, I'm wondering if some may see you as antisemitic due to your scepticism on the holocaust. I recall your vlog review of the film Denial where you seem to come out on Irving's side, that the holocaust has been vastly exaggerated. I think you were brave to say that but you must have been aware in how that may be perceived? Those familiar with your work will know that on balance you're not antisemitic. I think you should hold your head up high and face down the trolls. You have the guts to challenge orthodoxy and holy cows. You will always make enemies as it goes with the territory. I don't agree with you on many things but I admire you a great deal for your unflinching research and your courage. Best regards, Ade

Hi Ade.
Thanks very much. I don't think my Denial review is relevant though. I don't think any of my accusers have seen it, and in the review, if I recall, I actually only take David Irving's side over his right to free speech. I do not question the Holocaust myself. Also see the video "Jews" in the background link.

There is one other thing you could do Ben: ditch facebook. All you (and everyone else on the infernal thing) is doing is supporting the interests of a US data corporation.

Maybe you're right, Laurence. I certainly use it a lot less than I used to, and with more trepidation.

Grizzlyben, man of the wild. said...

I need to communicate, but I'll try to be more careful, GB