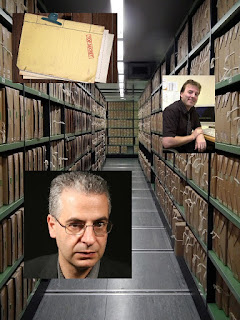 The last batch of reports from the UK Ministry of Defence's UFO desk have been rejected for declassification by state auditors. The documents, dubbed the "British X-Files", have been long anticipated by UFO researchers. It's been speculated that they might contain the smoking gun when it comes to the Rendlesham Forest Incident of 1980. The MoD has been releasing its UFO records in a series of phases since 2008 and this process is almost complete. For personal reasons I'm particularly interested to read the files pending publication at the moment because somewhere within them is my own sightings report, see: http://hpanwo-tv.blogspot.co.uk/2009/03/my-ufo-sighting.html. There is not necessarily anything sinister involved in file auditing and the censorship of some material. The reason for a lot of it might be due to the 1998 Data Projection Act because it includes personal details about the witness; their home addresses etc. Nick explained this at a live lecture of his I once attended, see: http://hpanwo.blogspot.co.uk/2008/06/now-thats-weird-conference-2008.html. However in this case the government has given a specific reason why: "Unfortunately, following the transfer of files to the National Archives in June, additional information which is covered by FOI exemption was identified, resulting in the files being returned to MoD in August." "FOI" means the Freedom of Information Act. This could be almost anything from an old lady's mobile phone number to major evidence of UFO presence whose secrecy is deemed essential to national security. Source: http://www.express.co.uk/news/weird/722373/UK-UFO-X-files-sent-back-MoD-CENSORSHIP. The most interesting part of this news story is the comment by Nick Pope: "For the MoD to send these UFO files to The National Archives, only for them to be sent back to the MoD, is unprecedented. I worked on the MoD's UFO project, wrote many of the documents that have already been released, and made the official announcement that started the entire release project, and yet even I don't know what's going on here. Bear in mind that for years the MoD told Parliament, the media and the public that this subject was of very limited interest and of no defence significance, yet suddenly these files are being treated with the same sort of sensitivity that you'd expect to see if they contained Britain's nuclear secrets. All this is taking place in the run-up to the Presidential election, with WikiLeaks revelations showing that discussions about UFOs have taken place at the highest political level in . This whole situation is like something out of The X-Files." For Nick Pope to make a statement like this is frankly out of character. His attitude towards this matter is only slightly milder than my own (I would have used the word suspicious as well as unprecedented). He has always been very defensive of his former employers in the past. Could this be because he now lives in the where they can no longer "get at him"? I agree that the halting of the file release process comes at a very ground-breaking time period in UFOlogy, at least on the surface. We have the WikiLeaks revelations as well as the continuing drive by Stephen Bassett and the Paradigm Research Group for full UFO Disclosure, see here for details: http://hpanwo-tv.blogspot.co.uk/2016/10/ufo-disclosure-2016-wikileaks.html. Could this be a coincidence? If so then when... or if... the withdrawn files are ultimately released there will be no clues in them at all. It'll simply be more of the same, man-walking-dog-on-Cannock-Chase-sees-ball-of-light-in-sky, kind of thing. Either that or when you read them out loud they will sound something like this: https://www.youtube.com/watch?v=5EcRMpRfhQk.
See here for background: http://hpanwo-voice.blogspot.co.uk/2012/07/ufos-back-in-news.html.
And: http://hpanwo-voice.blogspot.co.uk/2010/02/uk-mod-releases-more-ufo-files.html.
And: http://hpanwo-voice.blogspot.co.uk/2008/10/19-more-british-ufo-files-released.html.
Posted by Ben Emlyn-Jones at 16:52

Why do you constantly self-cite/reference? Have you not heard of the Harvard guide to citing references? Shows you haven't been to University I suppose.

IMHO there are more answers in plasma experiments than any government files, and there's thousands of years symbolic inertia guiding peoples perceptions. Civil servants or military types don't have a clue generally (not stupid, just institutionalist/narrow/answer hungry/supremacist thinkers etc) and it continues to confuse me why people take what they say so seriously.

What Disclosure threatens today is the convenient mythos they can overwrite people with after making people do awful and/or illegal things.

Years ago this was a very unpopular way to see things, maybe that's changed, I dunno.

Hey George - any chance of your covering the topic of the British Expert George Spiers dying mysteriously in Poland on the eve of giving a lecture on the topic? Love you on C to C.

Hi Ben, there are more files on the Cosford incident that they won't release because it relays details of American investigation involvement. I personally feel that they have been delayed or stopped because people like myself and others have found out new information that could potentially up root a whole new coverup of UFOs and the British Government.
To suddenly stop the release means they have found out that some people know too much etc. Trust me this is why and not just because of the 1998 data protection act.

Thanks for the info, Darren, and it doesn't surprise me. I hope there will be a REAL declassification soon.