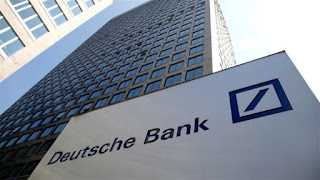 A new financial waterfall is looming ahead; and, as I've said before in the background links below, these kinds of catastrophes are rarely accidental. This time one of 's oldest and biggest banks is in trouble; Deutsche Bank, which means simply "the German Bank". It was founded in 1870 and, very symbolically, has its headquarters in a pair of skyscrapers in called "The Twin Towers". The decline of Deutsche Bank has been a long drawn-out process, very different to the sudden calamity of Lehman Brothers Holdings that marked the start of the Great Recession in 2008. Over the last ten years its stocks have slumped and debt increased. It has suffered numerous scandals, fines and court cases. It began the year with the announcement that it had made record losses of over 6.8 billion Euros. Its shares are now worth just 48% of what they were last year. They've introduced negative interest rates, which means savers are going to lose their money and creditors are going to put pressure on borrowers to pay off what they owe. The bank is now selling their shares desperately at a discount price. I recommend nobody buys any Deutsche Bank shares. If you have one, don't sell it at the moment. If you bought one in 2007 it is now worth just 8% of what it was back then. The bank has announced over nine thousand redundancies in ten countries. With $US 15.8 billion left in capital and an $US 11 billion fine, it is now poised to go the same way as Lehman Brothers. Deutsche Bank is intimately linked to many other financial institutions all over the globe, including all the British and French clearing banks, and the Federal Reserve; and its influence can be felt in every corner of the world. It cannot fail to affect the health of the global economy if it falls. The German chancellor Angela Merkel has called Deutsche Bank "Too big to fail!" Those are fateful words. I feel a sense of deja vu that Anthony Peake would understand. Yes, predictably, Deutsche Bank's executives are already approaching state institutions with their caps in hand to discuss the possibility of a bailout; in other words, getting you and me to prop them up. We haven't even paid off a fraction of the last bailout yet, even if it was a fair thing to do. (Incidentally the entire wealth of the world in raw capital in estimated at about sixty trillion dollars, yet there is over 121 quadrillion dollars floating round as debt and derivative shares! How is that possible?) We might even face a "bail-in" which is even worse; it's the kind of criminal abuse inflicted on the people of a few years ago, see: http://hpanwo-voice.blogspot.co.uk/2013/03/the-bank-robbers-of-cyprus.html. Deutsche Bank have made a public statement saying that they are confident that everything is normal and the worst is behind them, yet this is what Lehman said just weeks before they filed for bankruptcy. If Deutsche Bank tanks then what will happen? Because it is such a hub of the European and world economy then this will inevitably harm the financial lives of everybody everywhere else; on a personal, national and supernational level. There's no doubt we now face a new Great Recession, probably a far worse one than 2008; and, as I've said, this is not just an accidental and inevitable effect of the economic system, or even just financial incompetence. There is extreme monetarism in the modern world. State regulators set exchange rates, interest rates, commodity prices, and much more. Do you really think the state-corporate-fiscal authorities wouldn't be able to rescue their own creations if they wanted to? Why would these authorities want a new and worse recession? Wouldn't they lose money and assets themselves? Of course, but they have so much left they will not suffer. As always, the brunt of the recession will be born by the most financially vulnerable people in society; pensioners, the disabled, the unemployed, those in low paid employment. We will be told we have to face more and deeper "austerity" for the good of all. The bankers have the equivalent of an underground bunker while we, the people, just get blown away in the hurricane. The chaos resulting from yet another major economic crash in the space of a decade will create the perfect situation for what David Icke calls a "problem-reaction-solution". The solution in this case could be a total restructuring of the world economy, beginning with what I've long predicted, a global currency reset, see: http://hpanwo-voice.blogspot.co.uk/2014/10/back-to-bailout.html. After that? Who knows? However we know what the Illuminati goal is: total resource-based world economic control. They began this a long time ago, at least since the Federal Reserve Act; see G Edward Griffin's The Creature from Jekyll Island. Our only action now has to be the exposure of this agenda to the public. It survives by secrecy alone. Take that away and it is doomed. Source: http://www.independent.co.uk/news/business/news/deutsche-bank-is-it-too-big-to-fail-fine-shares-stocks-performance-a7346726.html.
See here for background: http://hpanwo-voice.blogspot.co.uk/2014/06/max-keiser-in-parliament.html.
And: http://hpanwo-voice.blogspot.co.uk/2014/12/austerity-did-you-really-think-it-would.html.
And: http://hpanwo-voice.blogspot.co.uk/2015/07/greece-get-with-russia.html.
And: http://hpanwo-voice.blogspot.co.uk/2013/01/the-fiscal-beach.html.
Posted by Ben Emlyn-Jones at 18:32

Very timely and well researched piece Ben, as ever. (The stock markets are all down and the Irish Exchequer is warning of inevitable downturns as I write.) I believe that the, "state-corporate-fiscal authorities" that you speak of have bought themselves time with QE, quietly extracting themselves from future shocks while simultaneously beggaring the rest of us. Incidentally, I would add, "military" to that compound word (i.e. state-corporate-fiscal-military). In addition, your references to, "total resource-based world economic control" and the Federal Reserve Acts are apposite as precious metals will likely play a large part in the economic zero reset. Keep up the good work.

Finally, you may be interested in the following article that suggests that the NWO is, as you say in the your radio shows, faltering.

Thanks, Laurence. Will do. That article is encouraging. Military is included of course. We've seen that a lot in recent years.