Monster in a Sewer 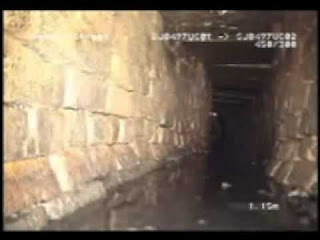 In 2011 a remarkable piece of footage was released onto LiveLeak. It is made up of clips taken from a remote camera being used by engineers inspecting sewers underneath the streets of . The frames have location stamps of and in the city centre. The first clip shows an animal of some kind leap across a junction ahead. It's too fast to be examined closely, but it looks too big to be a rat. It is probably bipedal and has a long tail. The camera stops moving, as if the operator is shocked by what he's seen. The second clip is in a different kind of sewer, a more modern one with a circular cross-section, but the same thing happens. The third clip looks normal so I don't know why it has been added to the footage; nevertheless some strange white vapour is blowing through the pipe, a bit like fog. It is the last clip that is the most interesting. It is shot in a 19th century sewer with old brickwork up the walls and a flat top. The camera is stationary on a smooth left bend; then a tall upright being of some kind peeks round. It has two brightly glowing eyes which appear to have internal luminescence; they're not just reflecting the camera's headlight as a cat's eyes would. The camera moves towards the entity and it shrinks back out of sight. The camera stops, as if the operator doesn't want to alarm the beast. A few seconds later the creature returns. This time it stands and stares, exposing more of its body. It is definitely bipedal and has long forelimbs. It appears slightly stooped. It then turns round and vanishes permanently and you can just see its long thin tail before it's gone. Source: http://www.liveleak.com/view?i=433_1301659042. The water company for the region around is called United Utilities and their wastewater network manager Mike Woods issued a statement: "Several of our employees have reported sightings of some kind of animal. We've reviewed the CCTV footage, and it certainly doesn't look like a typical sewer rat. We are hoping that the public can help us. The animal could possibly be a domestic pet or feasibly, an animal which has escaped from the zoo. It seems to be feeding on fat deposits which have built up on the inside of pipes. We're asking the public to look at the footage, and to contact us if they can shed any light on what the creature is, and where it might have come from." The CCTV operator, Ian Appleton, said: "We survey the sewers using hi-tech cameras mounted on small mobile vehicles, like very expensive remote control cars. I was sat in the van looking at the live sewer images on a monitor. I physically jumped when I saw the thing. My first reaction was: 'That's the biggest rat I've ever seen!' Then it stood up on two legs and looked almost simian. I was a bit freaked out. I've been in the business twenty-five years, and it's the most unusual thing I've ever seen down there. All the lads have seen the footage now, and it gets the same reaction every time. You're just waiting for them to jump." The animal has apparently been nicknamed "Messie" by the engineers; presumably this is a play on the words "Nessie" and "mess", because it's a cryptid like the Loch Ness Monster found in a messy sewer. The statement by United Utilities can no longer be found on their website and the only record of it is a handful of media spots like this one, see: http://www.leighjournal.co.uk/news/8946564.SEWER_CREATURE_CAUGHT_ON_CCTV/#.

However, the water company later issued a second press release claiming that the whole matter was a hoax. It was a piece of viral marketing for their campaign to persuade customers to be careful what they flush down drains and toilets. A lot of damage is done to sewers by inappropriate objects being disposed of in them, everything from baby wipes and nappies, cotton buds and many other kinds of household rubbish. These things need to be put in the dustbin, not down the drain. This statement is also unavailable on their house site and can only be found in the media, see: http://www.manchestereveningnews.co.uk/business/business-news/united-utilities-sewer-monster-april-857606. This is a distinct possibility, probably the most likely explanation. It doesn't help that the news broke on April 1st, so if this is really not a hoax then its incredibly bad luck for the witness; personally I'd have waited twenty-four hours before saying a word for that reason alone. On the other hand, could this be another example of a "CTCS- Conveniently Told Confession Story"? See here for background details: http://hpanwo-voice.blogspot.co.uk/2015/01/alex-malarkey-ctcs.html and: http://hpanwo.blogspot.co.uk/2011/04/paranormality-by-prof-richard-wiseman.html. Also, if the creature is a piece of computer generated animation, the company does not attribute the artist who rendered it. Don't they want this work on their CV? If there is some kind of mutant or hybrid living beneath the streets of then there are many reasons why the authorities might not want the public to know about it. In the event of an information leak, concocting a false hoax story could be a way of dissolving any interest the story could generate. If there is some strange critter making its home in Mancunian effluent, then what is it? The sewer network in large British cities is often very old, being installed mostly during the Victorian era to prevent cholera, see: http://hpanwo-tv.blogspot.co.uk/2013/03/joseph-bazalgette-memorial-hpanwo.html. Until modern remote CCTV came along, a lot of these passageways have not been seen by human eyes since their construction well over a century ago. It's not inconceivable that this artificial environment has become an unintentional evolutionary hothouse, causing new species to emerge far more radically and quickly than they would in nature. If so then the beast is probably a descendent of the brown rat, the principle large predator in the habitat. It's also highly adaptive and a fast breeder. I've studied other examples of extreme rat mutation in the background links at the bottom. Alternatively it could be an escapee, as the water company suggested; but not from a zoo, from a secret government laboratory like Porton Down or Peasemore. Of course this is a long shot; why shouldn't the water company create a hoax to hammer home the hazards of incorrect use of drains? However, can we trust their word? What is the reputation United Utilities has for honesty? In this lecture: http://hpanwo-voice.blogspot.co.uk/2014/08/richplanet-live-in-london.html, and this film: http://www.richplanet.net/starship_main.php?ref=205&part=1, Richard D Hall claims that United Utilities lied to cover up their own criminal negligence that led to the death of a policeman, many injuries, the loss of hundreds of homes and billions of pounds worth of damage in the 2005 Cumbrian flood. They might even have staged a mass-murder using a mind-controlled Manchurian Candidate-style killer. In my view, it is far too soon to decide for certain that United Utilities' response to the presence of this strange LiveLeak film is sincere. We must also consider the fact that "Messie" is not the only example of weird fauna existing in the dark channels below the city streets. A large mollusc-like organism was spotted by a construction team in in 2009. This time the company involved maintains that the footage is real. Staff biologists, unnamed of course, claim that it is merely a colony of worms, yet the engineers say they've never seen anything like it in their experience, see: http://www.dailymail.co.uk/news/article-1196884/No-hoax-Video-alien-life-form-sewer-internet-hit.html. A few years ago I read a bloodcurdling pulp horror novel called Slither by John Halkin about a colony of green serpentine creatures, whose origins are never explained, appearing in 's sewers and spreading out across the world. I know it was only a work of fiction, but life imitates art so much that I can't help wondering where authors get their ideas from.
See here for background: http://hpanwo-voice.blogspot.co.uk/2014/01/ship-of-rats.html.
And: http://hpanwo-voice.blogspot.co.uk/2015/02/monster-rats.html.
And: http://hpanwo.blogspot.co.uk/2015/01/area-51-alien-interview-new-research.html.
And: http://hpanwo-tv.blogspot.co.uk/2013/12/peasemore-2-harwell-laboratories.html.
Posted by Ben Emlyn-Jones at 21:00