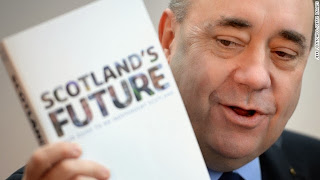 is to have a referendum on the most crucial and contentious subject in its political history: . has been officially part of the "" with for over three hundred years when the with Scotland Act of 1706 was passed into law; this forms the modern . This in practice means that is ruled by . However, has been a subject nation since long before then. Mel Gibson's highly-acclaimed film Braveheart is about one of the earliest Scottish wars against the English crown, told from the Scots' point of view, which took place almost five hundred years before the Act of Union. Now however, after spending so much time, energy and resources to place and maintain under the Doctor Marten of , the David Cameron Government plc has, almost casually, announced that is to be offered, on a plate, complete independence from the United Kingdom of Great Britain and Northern Ireland. The referendum will take place in September 2014. The choices are a binary yes-no to the question: "Should be an independent country?" If the Scots choose yes then could be fully devolved as early as March of 2016.

The Scottish Government, under the First Minister and Bilderberg Group member Alex Salmond, has unveiled its white paper for independence. It's called Scotland's Future and can be downloaded here: http://www.scotland.gov.uk/Publications/2013/11/9348/downloads. It is over 700,000 words, longer that the longest Harry Potter novel. So far it seems to be only available in English, although has two other official languages, the Scots dialect and Scots Gaelic. I'm sure that the text of this document was not composed recently. Like all subject countries seeking independence, Scottish statesmen have been compiling provisional constitutions and governmental models for hundreds of years. Some of what's in it are a great improvement on what the Scots have to put up with now; for example, an independent Scotland would become a nuclear arms-free zone with the Trident base on the Firth of Clyde removed, see: http://hpanwo-voice.blogspot.co.uk/2013/07/replacing-trident.html. It also describes how would organize its economy, defence, education and healthcare etc. A number of years ago I was a Welsh nationalist and would have cheered at the prospect of my fellow Celts casting off the yoke of the Anglo-Norman oppressor. I would hope that would follow suit. If somebody had told me back then that I'd be advising the Scots to vote no in this referendum I'd have called them crazy... But I am doing just that.

The problem is that independence today means something very different to what it meant at the Battle of Stirling Bridge. Our rulers have changed their names and reorganized their empire. The Scottish relationship to the rest of the may transform, but its relationship to the European Union is an entirely separate matter. As you can see from this article: http://news.scotland.gov.uk/News/Scotland-s-European-future-339.aspx; the nation of is actually very much a Europhile, more so than as a whole. The has been a major stumbling block to full European integration and the creation of the dictatorial European superstate. My concern is that the Eurocrats could be trying to overcome this problem by fragmenting the country into its constituent parts in order to absorb it more easily; a bit like a washer-up breaking a large lump of potato into smaller bits with their fingers to force it down a kitchen sink plughole. If leaves the then will probably demand the same option, possibly with the same willingness to cooperate with the EU agenda. My own uncle is still a Welsh nationalist who describes himself today as a "federalist", who wants to see an "independent" Wales as an "active member state" the EU. This will leave only and possibly , a much more lightweight opponent than a united . As Nigel Farage of UKIP says, if they vote yes then the Scots will be swapping their foreign rulers in for others in . I'm not a UKIP supporter, or a patriot of the United Kingdom, but I think the reality of the situation behoves us not to play along with any games designed to break down a major force of anti-EU resistance, whether you feel personal loyalty to it or not.
Posted by Ben Emlyn-Jones at 14:28