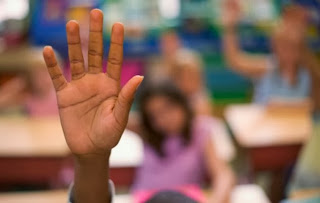 A school headmistress has sent a letter to the parents of eight-year-old pupils warning them that they might be branded "racist", see: http://www.dailymail.co.uk/news/article-2511841/Children-8-racist-miss-Islam-trip-Schools-threatening-letter-parents-met-outrage.html.


The letter from Lynn Small, headmistress of in Huntington, Staffordshire, gives advance notice to parents of an upcoming school trip, which the parents have to contribute $5 each towards, to an exhibition of Islamic religious artefacts. This is normal practice for a child's religious education and I attended a few like that when I was at school, quite a few years ago now. The terrible thing is where in the letter the teacher warns that a "Racial Discrimination Note" will be attached to the child's school report if they refuse to go along. Mrs Small has since apologized and withdrawn the letter, but my concern is that such a thing as a "Racial Discrimination Note" even exists! This was something that definitely was absent from my own days at school. I've written before about how there seems to be a psychological warfare attack, literally, against the population through the demonization of white people, heterosexuals and males, see: http://hpanwo-voice.blogspot.co.uk/2013/08/anti-feminist-demonization.html. This originates from cultural Marxist think tanks like the and the Fabian Society. Nowadays this includes Common Purpose; Mrs Small is not on the list of graduates, but it's possible she has had to go through a "teacher training course" with somebody who is, see: http://www.cpexposed.com/graduates. This is the first time I've heard of one of these psychological attacks being launched at those so young. It shouldn't surprise me; the focus of psy-ops has always been the young. This was certainly my own experience with my daughter at school, see: http://hpanwo.blogspot.co.uk/2007/11/this-is-drawing-done-by-my-12-year-old.html. The prospective citizens of New World Order are today's youth. If they can be conditioned at an early age to feel guilty of Thoughtcrime then they will not need to be reeducated as adults with all those troublesome memories of happier times in the past. This was what gave Winston Smith in George Orwell's 1984 a foundation for his own free thought rebellion. It is essential we protect our children from this kind of nasty brainwashing and I'm glad the parents are making a stand. However a lot of this resistance has taken on the tone of the anti-immigration lobby and that is a mistake, see: http://hpanwo-voice.blogspot.co.uk/2013/07/health-tourism-crackdown.html. When bursting our kids out of one prison cell, we must be careful to avoid leading them straight into another.
Posted by Ben Emlyn-Jones at 00:58