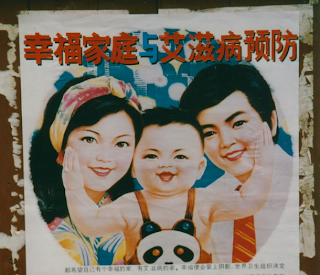 has relaxed its controversial One Child Policy. This was a piece of legislation introduced in the late 1970's when the government was very hardline Maoist, see: http://www.bbc.co.uk/news/world-asia-china-24983007. It was intended to try to curb the rapid growth of 's already huge population, almost a quarter of the entire world's. The policy has caused a lot of suffering, a whole generation of children for whom brothers and sisters are an alien concept. Having an unlicensed second child can result in a heavy fine and many couples perform late-term abortions and even infanticide in order to avoid a second child. Girls are killed more than boys because the Policy sometimes permits extra boys. This has resulted in a gender imbalance in that generation. BBC News interviewed an American human rights activist who is pleased at the Chinese Government's decision. The newsreader asked him: "But surely something must be done about 's population levels." He bravely responded: "The ends do not justify the means." The ends do not justify the means. It's very rare to hear those words nowadays. According to the Machiavellian social Darwinist mainstream there is no depravity we cannot stoop to if it is necessary for some end; and it doesn't need to be a particularly necessary end, just one the government tell us they want, like more oil fields. I bet Bill Gates is hopping mad at the news from and David Attenborough is kicking his pet gorillas in temper. God knows what Mark Lynas and the other New Greens are doing to vent their rage. The world is not overpopulated, as I've said before, see: http://hpanwo-voice.blogspot.co.uk/2013/07/earths-population-reaches-7-billion.html. Local overpopulation does exist in some places and this is indeed a problem in some regions of . But it's not caused by a lack of space; if you look at a population density chart of you'll see that nearly all it's 1.5 plus billion people are squeezed into one corner of the country. There are other ways to solve that problem than killing babies.
Posted by Ben Emlyn-Jones at 23:29