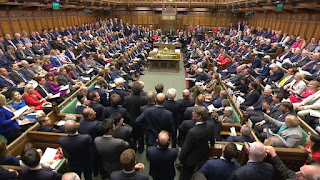 Today the House of Commons will finally vote on Prime Minister Theresa May's Brexit deal. The forecast is that the MP's will reject it, and they will be right to reject it. It is an act of national self-flagellation, even suicide. It would make a vassal province of the European Union, independent in name only, with even less self-determination and security than the meagre rations of both doled out from to its "member states" as it is. The deal must count as one of the most unpalatable bills ever presented to Parliament... and it's meant to be! The whole purpose of the deal is for it to fail and therefore derail the entire Brexit process. If by some miracle Parliament passes it, nobody will be more disappointed than Theresa May. If... when... the deal is thrown out, what will happen? There are a few options. May could try to amend the deal and submit it to the Commons again. She could return to the European Commission and renegotiate Article 50. Either of these two options will take a long time and will probably lead to an extension of the Article 50 period so Brexit is delayed. She could proceed to declare independence on the original Brexit Day, March the 29th, without a deal; in which case we would all be eaten up by Godzilla, see: https://hpanwo-voice.blogspot.com/2018/07/army-on-standby-for-brexit.html. In the midst of all this process there will probably be pressure on May to resign and a new Prime Minister might take over the Brexit reins. There could well be a general election too which would probably result in a hung parliament, the third since 2000. Either that or a Labour government which will need an article of its own even to outline. Source: https://www.bbc.co.uk/news/uk-politics-46868194.

The spanners in the works will continue unabated in all the above situations. My guess is that the process will grind to a complete halt, probably before the end of spring, and the cancel Brexit option will be tabled... Game, set and match! A second referendum will definitely result in a Remain victory. The government will tighten up their manipulation of the vote. There may even be another Jo Cox-like event. Sadly even that might be redundant because I can feel the public's energy waning. I've heard many people say: "Look, this is just too much hassle. Can't we just forget the whole thing?" However, none of the above is inevitable if the British public refuse to tolerate such contemptuous treatment by our so-called "leaders" who are really just treacherous agents of a covert global power. The truth shall set us free! The House of Commons will be voting on the deal at about this evening. The result will be announced at and this will be followed immediately by an announcement by the Prime Minister. It really doesn't matter what the outcome of the vote is. The only alternative position that has ever existed in government has revealed itself to be controlled opposition, see: https://hpanwo-voice.blogspot.com/2018/12/whats-wrong-with-ukip.html. There will be a livestream on HPANWO TV tomorrow evening at to discuss the issue, the first of more than one, see: (coming soon)
See here for background: https://hpanwo-tv.blogspot.com/2016/06/brexit-reality.html.
And: https://hpanwo-tv.blogspot.com/2017/03/richard-dawkins-patronizing-git.html.
And: https://hpanwo-tv.blogspot.com/2017/02/go-to-hell-tony-blair.html.
Posted by Ben Emlyn-Jones at 18:03