China lands on the Dark Side 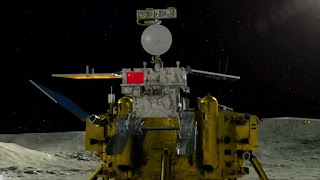 A Chinese space probe has been reported to have landed on the moon. The unmanned Chang'e 4 mission is unique in that it has landed on the dark side of the moon, the first time this has been done. Up until now all claimed achievements in lunar exploration have been on the near side, facing the earth. The moon is tidally locked, which means its orbit matches its rotation relative to the earth exactly, so it only ever presents one side towards its primary. The other side is called the "dark side", but in this case "dark" means "unseen" instead of literally dark because it receives just as much sunlight as the near side, albeit at different times. It even has phases, but these are the opposite of the ones we see from the earth. The Chang'e 4 lander has a rover, similar to the ones NASA says it has put on Mars. This will travel across the lunar surface to study the moon with radar and chemical analysis. It is also going to try and grow a plant in a sealed capsule. Because it is out of direct line of sight from the earth the spacecraft has to communicate with mission control via a relay satellite that is resting at a "Lagrange" point where gravitational forces are balanced. Source: https://www.bbc.co.uk/news/science-environment-46724727.

Scientists prefer the term "far side" to "dark side" to describe the side of the moon facing away from the earth. Whatever you call it, it is a highly unusual place because it is one of the few places in the universe that is completely invisible from the earth for another reason that sheer distance; and on by cosmic scale it's very close indeed, just next door. It is also very large, 7.3 million square miles. This makes it the ideal place to operate from space onto the earth without being seen. It would be the best place to locate a secret space programme operation. Alternatively, if the earth is being visited by extraterrestrials, and I believe it is, then they would probably have some sort of facility nearby; and the moon's dark side is perfect. Flying saucers and other UFO's average in size at about the same as human aircraft. This means it is likely that most are too small for interstellar journeys and therefore the aliens probably travel from their home worlds in larger craft which land on the far side of the moon and it is from there that smaller craft visit the earth. Unless they are using wormhole technology which is a possibility. However, there is more than just supposition behind this. There is much evidence from witness testimony. NASA contractors Donna Hare and Sgt. Karl Wolfe describe how photographs taken by spacecraft near the moon had to have the secret bases edited out before they were published in the media, see: https://www.youtube.com/watch?v=_4hycqDNnPE and: https://www.youtube.com/watch?v=jR6WcSk6zn8. In this case, wouldn't the keepers of the Truth Embargo be worried that the Chinese space agency might expose them? After all 's space programme is independent, is it not? In fact a newspaper has already jumped on board with this eventuality, see: https://www.mirror.co.uk/science/chinas-moon-mission-reveal-secret-13806615. So far nothing earth-shattering has been said. has released a few photographs to the media that show the same kind of lunar landscape we've seen on other alleged moon landings. I think it is highly unlikely that we'll enjoy any kind of great revelation from over this. The same questions about international collusion over secrets in space date back to the beginning of public space exploration. There are many political, economic, cultural and psychological reasons why would aid and abet the in keeping lunar secrets, just like the did during the space race, and I explore those in the background links below... but I could be wrong. Needless to say, if I am wrong then you should stand by for an emergency update. I don't know if this is connected, but Karl Wolfe sadly died a few weeks ago, see: https://www.foxnews.com/us/airman-who-claimed-he-saw-top-secret-nasa-photos-of-alien-structures-on-the-moon-dies-in-bike-crash. According to the news report he was killed in a cycling accident. The same supposedly happened to Peter Fisher, see: https://hpanwo-voice.blogspot.com/2018/08/peter-fisher-dies.html.
See here for background: http://hpanwo-tv.blogspot.com/2019/01/ufo-disclosure-2019-maybe-this-year.html.
And: http://hpanwo-tv.blogspot.com/2018/12/the-apollo-detectives.html.
And: http://hpanwo-radio.blogspot.com/2018/12/programme-306-podcast-apollo-8.html.
Posted by Ben Emlyn-Jones at 18:18

Hi Ben, I love your books but I need some advice on tax. I am self-employed in the Didcot area and I just don't understand the self assessment forms. You must have a decent accountant to deal with all our income streams.

Loved this blog btw and will keep peeled for an emergency update.

Thanks, Charlie.
Funnily enough, you're not the first person who has asked me about tax forms. Dover Athletic FC also contacted me about the subject. Seeing as they are so utterly crap at playing football and can't get their players' overweight untrained arses out of the rolled-up-jackets-as-goalposts league, they seem to be no better at accountancy. Did you know at the last Dover game only one fan turned up. This lawn-cutter with dogshit all over his face. He stood alone on the terrace.

Don't you cut grass, too, and fix old ladies'plumbing? If you must know Dover had a dodgy start to the season but since Andy Hessenthaler took over they have played some nice stuff and are out of the relegation zone. The players' mums though keep moaning about them getting their jackets dirty. They also average over 1100 fans at Crabble, per game not season! Still, I don't know what this has got to do with me as I support AFC Dunstable. Born and Bred there. I take you know nothing about tax then? The stream gurgled downhill. Ayn Rand was really a man. I get confused with the 20% rate and the higher one, also the tax free allowance. Your work should be tax free as you are providing a public service.

Ayn Rand had a voice like a man, but she was a woman. In those days it was obvious which was which. Her voice came from her two-packs a day smoking. Yes I do cut grass too, but I do it in people's gardens where dogs aren't allowed to go to the toilet.