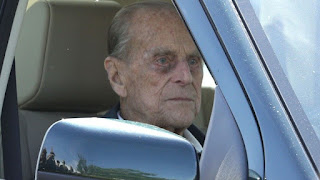 It has been reported in the news that Prince Philip has been involved in a road traffic accident. The incident happened on the A419 in , in an accident black spot not far from Sandringham House, one of the Queen's official residences. The estate has a dark reputation. King George VI and the V both died there, her father and grandfather. There have been alien abductions and mysterious disappearances in the vicinity. In 1915 an entire battalion of the British army who were based on the estate vanished; not in the area admittedly, but during the campaign in . The ninety-seven year old consort to Queen Elizabeth II was driving a black Land Rover. According to a witness he collided with a Kia hatchback as he was joining the A419 from a junction. His car "tumbled" and "careened" across the carriageway and ended up in the ditch on its side. There were two women in the hatchback and a nine month old baby. The baby was unhurt, but one of the women broke her wrist. Amazingly Prince Philip was completely unharmed despite his advanced years and, as you can see from the news photos, his car definitely came off worst. He saw his doctor "as a precaution" and then went straight home to . Source: https://news.sky.com/story/duke-of-edinburgh-involved-in-car-crash-near-sandringham-estate-11610133.

Of course it's possible that he was just lucky. The royal family of today do have a reputation for charming the goddess Fortuna. It is also possible that Philip spontaneously shape-shifted in alarm. The reptoid physical form is far more robust than the human. I state the above in all seriousness; see here for more information: https://hpanwo-voice.blogspot.com/2017/10/repcon-2016-videos.html. It is also possible that archonic forces intervened to save him. This is a big subject that I'll cover in more detail in the future, but I do suspect that, as a Facebook correspondent of mine put it: "the devil looks after his own!" Again, I take this possibility completely seriously. The same correspondent asked me if this could be some kind of distraction from Brexit. Was it a murder attempt? Maybe. I've wondered lately if Prince Philip is already dead. My guess in that case is that he died in late 2017 because it was then that the media reported that he was "retiring from public duties". If so then the images we've seen of him since then are Photoshopped or simply earlier pictures with false dates on them. His few public appearances could be handled by look-alike actors. There is distinct reason to believe that Fidel Castro, the long-term leader of , did not die in November 2016 as officially reported, but some time in 2013, see: https://hpanwo-voice.blogspot.com/2016/11/fidel-castro-died-long-ago.html. His death was kept secret until it was the right political climate to announce it. We know that Philip's health has been deteriorating for the last five years or so. He has suffered numerous water infections; a sign that his aging immune system is breaking down. If he is already dead then why did they not just announce it when he died? Possibly they do not want him to be declared dead too close to the death of Prof. Stephen Hawking. When the famous paralyzed physicist passed away in March 2018 there was an outpouring of mass public grief. It included a musical requiem by the famous Greek composer Vangelis, see: https://www.youtube.com/watch?v=kiXWfLJ5T64. There were memes all over the internet and thousands of people lined the streets for his funeral in . People who never knew him personally were crying. The fact of the matter is, when Prince Philip finally kicks the bucket nobody will give a shit. The palace knows this and so don't want the two mourning periods too close to each other in case people start comparing them. My guess is they have chosen a one year minimum period; so don't be surprised if Philip "passes away peacefully in his sleep" in March 2019, about two months from the time of writing. If I'm right about this then it means the reports about the car crash are fake. If so then why? Philip survived and was not even injured, so this is hardly a distraction from Brexit or anything else for that matter. I have no answers at this juncture.
See here for more background: https://hpanwo-radio.blogspot.com/2017/08/programme-248-podcast-diana-20.html.
And: https://hpanwo-voice.blogspot.com/2018/07/romanov-execution-centenary.html.
And: https://hpanwo-tv.blogspot.com/2018/05/royal-wedding-livestream.html.
And: https://hpanwo-tv.blogspot.com/2017/12/harry-and-meghan.html.
Posted by Ben Emlyn-Jones at 17:07

Great bit of trolling there, Ben. Blimey. Are you seriously ok?

Carl. I'm not trolling. See the next HPANWO TV video.

I don't mind admitting I'm a Royalist Ben. I see monarchy and aristocracy as a natural order and I'm proud of English traditionalist institutions. I know David Icke argues our monarch is a reptoid etc but I think that is just poppycock. Icke is a left winger basically. He hates elitism because I think he might be envious like all those on the left. Our monarchy does a fantastic job of selling the UK brand. I hope Philip lives for many years yet. People are calling for him to quit driving but I think he should drive for as long as he is able.

Woody, I'm not against the concept of aristocracy. I'm not a republican or socialist. It just happens that the monarchy we have in Britain is a malevolent and illegitimate one. I don't have a problem with Prince Philip still driving, so long as he's on a mobility scooter.

Thanks Ben but in what way are they malevolent and illegitimate?

Woody, watch Illuminati 3- Murdered by the Monarchy on Enigma TV.