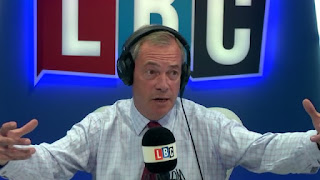 A few days ago Nigel Farage announced on his LBC radio show that he was resigning from the United Kingdom Independence Party, see:  https://www.youtube.com/watch?v=atwb3C_zikM. Despite being off the executive table, Farage has remained a highly influential character within the party because he was its most significant and long-lasting leader who took them right up to the 2016 EU membership referendum. His resignation has caused what Australians would call "a major drama!". He announced on his show that he was quitting because of a clash with UKIP's current leader, Gerard Batten, over Batten's appointment of the former English Defence League leader Tommy Robinson as an official adviser on the child grooming scandal. UKIP has been through a radicalization process in the last few months. There was a brief internet vogue among the anti-SJW YouTubers like Sargon of Akkad and Paul Joseph Watson for joining up. Farage has objected to the shift and wanted the party to remain on the centre right. Batten has defended his decision to work with Tommy Robinson, see: https://www.youtube.com/watch?v=1v6rMIwdLL4.

What's interesting about the above interview is that the subject of Brexit does not come up until almost two thirds of the segment is over. In fact Gerard Batten asks if he can talk about Brexit earlier in the discussion and the reporter refuses. By the time the subject is finally raised, the attention span of the viewer will be safely weakened. What Batten says then is absolutely correct and it matches closely what I have been saying since 2016, see background links below. Ever since the Leave vote won, the government has been desperately looking for a way to escape honouring the result while hiding the fact that they are actively doing so. It is now very obvious that the Brexit process was deliberately set up to fail. Scaremongering news stories and spanners in the works have both contributed to 's weary trudge towards independence grinding to a halt. Theresa May's deal is a terrible proposal and it is meant to be. It has accurately been called "Brexit in name only" and displays a suicidal attitude to the nation's wellbeing. It scraped through the cabinet and European Commission summit, but will probably be rejected by the Westminster Parliament. If and when that happens then Brexit goes back right to square one. Either possibility looks equally bad. The government have just been forced by the high court to publish the attorney general's legal options and these include cancelling Article 50 altogether and keeping in the European Union. This would be after the long-predicted second referendum; that is now looking increasingly likely. The energy of the public is waning and in such an eventuality the Remain vote would definitely win. The government would also be careful not to repeat the mistakes of 2016 and would work harder to rig the polls. That is the staged dilemma the government have given us and who is there to stand up to them? What has Nigel Farage been doing about this? Well, he has actually been supporting the idea of a second referendum, see: https://hpanwo-voice.blogspot.com/2018/01/farage-loses-his-mind.html. And at present he is goading UKIP members to fixate obsessively on a matter of internal policy; while all this time the very moment UKIP was created for is underway. Farage should be actively exposing the government as they run through the ins and outs of Brexit in the House of Commons. There is now no doubt that Nigel Farage is either a madman or a government stooge, probably the latter. Caroline Stephens is an ex-member of UKIP and has been working independently to blow apart the wall of lies behind which the British people are being betrayed; see: http://hpanwo-radio.blogspot.com/2018/12/programme-305-podcast-caroline-stephens.html and: https://www.youtube.com/watch?v=9F4vAq_-XTg. Nobody knows for sure what will happen next; however, it is clear that what conspiratorially-aware analysts predicted is definitely the road we're on. The government are on track to sabotage Brexit and nobody in mainstream politics is there to stop them. Anybody who thought UKIP were the people to do that will be very disappointed. I'll do another update when there is more news.
See here for background: https://hpanwo-voice.blogspot.com/2018/07/army-on-standby-for-brexit.html.
And: http://hpanwo-tv.blogspot.com/2017/03/richard-dawkins-patronizing-git.html.
And: https://hpanwo-voice.blogspot.com/2018/08/right-wing-conspiracy.html.
And: https://hpanwo-voice.blogspot.com/2018/10/would-it-be-better-if-brexit-is-stopped.html.
Posted by Ben Emlyn-Jones at 15:06

I think you've said in the past that you admire Farage and I think Robinson also. Is this still the case? Are these men NWO/Mossad stooges do you think?
Also, are you really a fan of Norman Tebbit? He is like JRM against abortion and against cultural marxism and unlike Mogg from a fairly humble background and hence cannot be accused of elitism. I think Tebbit was the only genuinely right wing real conservative in the small 'c' non partisan sense. A sort of conservative revolutionary figure. Nice to see that age has not mellowed the man. His autobiography 'Upwardly Mobile' reveals a complex and very passionate man who in fact has a very sardonic sense of humour. Cheers. Ralph

Hi Ralph. I don't think I've ever said I admire Tommy Robinson. I've made it clear that I think he's being used.
As for Norman Tebbit, I was just a kid when he was in power and did not understand politics.