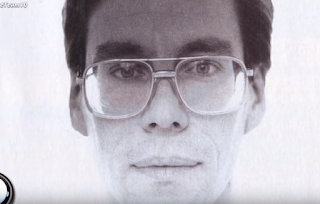 Apart from Capel Green, probably the most anticipated UFO documentary of our current time is Bob Lazar- Area 51 and Flying Saucers, directed by Jeremy Corbell and produced by George Knapp and Jim Martin, see: https://www.imdb.com/title/tt9107368/. The launch of the film was very dramatic. It premiered on at the famous Ace Hotel UA Theatre in , built by Charlie Chaplin. My friend and Mind Set Podcast host Gareth Davies went to watch it; see here for his report (coming soon). The film was released onto ITunes, Vimeo and numerous other platforms the moment the premier had finished. Unfortunately that means the middle of the night for me, but I watched it as soon as I got home from work today. Documentaries have become more artistic and elaborate over the history of cinema and this one certainly worked hard on being visually stunning, with good graphics and camerawork. There was a lot of suspense too. The story didn't detail the background of Robert S Lazar and it was assumed that the viewers were familiar with this, one of the most famous cases in conspiratorial UFOlogy. In the background links I provide my own assessment. The film includes a recording the first ever interview with Lazar in May of 1989 on local television in ; his face blacked out to protect his identity. After telling his initial tale, Lazar went quiet for many years, only resurfacing briefly in 2014 for the twenty-fifth anniversary of his revelations, see: https://hpanwo-voice.blogspot.com/2014/05/bob-lazar-25-years-on.html. He is a very shy and secluded man which makes Corbell's documentary an exclusive. The narrative focuses more on Lazar's personal life than the technical side of his publications; the latter has already been meticulously related and can be found everywhere you care to look. It shows Bob at home and at work in the laboratory of his scientific company. Bob loves science and engineering. In almost every scene he is wearing a science themed T-shirt. Every since he was a child he has been building machinery such as a jet-propelled bicycle. At the time he went to work at Area 51 he had already put together a particle accelerator in his bedroom. To use American slang, he was the ultimate "geek". There are candid interviews with Bob's mother, his wife of eighteen years, Joy; and one of his employees. It seems, as they say in the film, the better people know Bob the more likely they are to believe him.

There are many other reasons to believe Bob Lazar too. He talked about several items of technology that were originally secret but have since been declassified, such as an electronic security lock that scans a person's hand. He has also passed four separate polygraph tests. He eagerly wanted to do another for Corbell, but in the end the director decided against it; however he showed no reluctance. There's a parallel here with the Larry Warren situation. Bob Lazar has been controversial within the UFO community and many individuals within it have denounced him as a fantasist. The most notable of these detractors is Stanton T Friedman, somebody everybody in the community respects. Friedman's sceptical attitude comes from research he did into Lazar's educational record. However Bob Lazar insists that he studied for qualifications and those records were deleted. Seeing that it is now proven that he did work at the Los Alamos National Laboratory that makes sense. It is not an institution that recruits school-leavers. He must have gone to university somewhere. Corbell also found somebody who knew Lazar in his youth who used to give him lifts to his classes at the California Institute of Technology, a very high-level training institution. Richard D Hall, who is an electrical engineer, has stated publicly that Bob Lazar talks like somebody who has been scientifically trained, see: https://www.youtube.com/watch?v=DmYiwsz6T2k. In fact Richard has coined Bob Lazar's name as an adjective for anything he considers bizarre and out-of-this-world. It also turns out that the US Department of Energy really does have a facility with the name "S4", however they won't say what it is. The most interesting vindication comes from Lazar's discussion of "Element 115", what he called "Ununumpentium". Many years later in 2003 a new element was discovered at a laboratory in which was listed on the periodic table as number 115. It was named "Moscovium (Mc)" after 's capital city. However the scientists that discovered it describe it as having very different properties to those related by Lazar. It is highly radioactive and unstable. The longest half-life they can get from it in 0.8 seconds. Lazar describes 115 as metallic and used as a source for gravity waves by the extraterrestrial builders of the "sport model" flying saucer. However, there is already work being done to stabilize Moscovium; and if we can do that ourselves, why shouldn't the aliens have cracked it? Interestingly Lazar claims he was consulted by these Russian scientists for advice! After the initial threats to his life and that of his family, government attention towards Bob Lazar continued at a lower key, but still persistent level. An incident happens even during the production of the film. I really enjoyed Bob Lazar- Area 51 and Flying Saucers. It leaves no doubt at all that Bob Lazar's story is very credible indeed. As Jeremy Corbell says, the detractor faction has had the spotlight for too long; this film is where Bob Lazar and his supporters take the microphone off them.
I go into more details in this HPANWO TV livestream: https://hpanwo-tv.blogspot.com/2018/12/bob-lazar-movie-livestream.html.
See here for background: http://hpanwo-tv.blogspot.com/2011/07/janet-flight-to-area-51.html.
And: https://hpanwo-voice.blogspot.com/2015/10/the-sheahans-of-area-51.html.
And: https://hpanwo.blogspot.com/2015/01/area-51-alien-interview-new-research.html.
And: https://hpanwo-voice.blogspot.com/2015/07/area-51-extension.html.
And: https://hpanwo.blogspot.com/2008/01/david-adair-area-51-scientist.html.
Posted by Ben Emlyn-Jones at 20:11

Ooooo, look at the Tebbit lover, and his 'I won't to believe' bullshit. No aliens mate, would take too long to get here and why don't they land in Chad or New Zealand?

They do land in Chad and New Zealand. And you assume they don't have the ability to travel faster than light.

You can't go faster then light, Einstein proved it in his theories of relativity. Making up your own science now are you?

Ben, how come if these aliens are so advanced that their craft travel in excess of the speed of light, they are always crashing? Cheers. Tom

Once upon a time Ben was going to work as a porter when he thought to himself, I need some belief systems that will make me feel special and important. So he decided that it was a fact that aliens had flown here and live amongst us, he is even one himself. The naughty boy though didn't have any evidence to support this; he just liked the idea. What bothered him most was when people questioned his personal belief systems that don't have any compelling evidence.

'Don't you realise how long it would take for them to get here?' nasty, cruel people would hiss.

Ben could answer this with ease though.

'You don't seem to realise that aliens can go faster then the speed of light,' he would answer with an air of supreme confidence.

Now he has spread this fake information across the net to any detractors. So this proves he has a very poor knowledge of Einsteinian physics, if any at all.

Ben shouldn't evoke things to fit around his warped (pun intended) world view. Ben is stubborn in the fact that aliens exist on earth and will always beleive this. Nothing will shake his concrete world view. But I will ask some questions:

1. How much faster then light are aliens travelling?
2. You do realise how big space is, don't you? If Voyager 1 was travelling towards the nearest star to our sun at its current speed it would take 70,000 years to do so. The Milky Way is 100,000 light years in diameter and it is 2.537 million light years to the nearest galaxy.
3. Before you claim aliens are here amongst us shouldn't you solve the issue of how they get here first?
4. The braking problem. The momentum of a spacecraft breaking the light barrier would be huge, how do you slow it down?
5. If an alien spacecraft was breaking the light barrier it would be using all the energy in the universe, wouldn't that mean we are being destroyed?
6. What would be the point of aliens coming to earth if they are so advanced they can break the light barrier? After all they have more then all the energy in the universe as it is?
7. If they do land in places such as Chad why is Chad still such a backward,dry barren country?

You are so staggeringly wrong and on par with fanatical religious people and flat earthers. Also, try and answer those questions without saying 'huh, why don't you ask the aliens?'

Ben won't publish this or if he does he won't answer the questions sensibly.

Wow. This Chad fellow knows his astrophysics. Very impressive. Ben I hope you can answer this? Tom

Chad, have you not heard of wormholes?
The state of the nation of Chad is irrelevant. The citizens of that country never benefit from the UFO presence because the craft are secreted away Roswell style.

As if Einstein was never wrong, some people would argue his cosmological constant has been thoroughly debunked, and the correction is a fudge, leading theories up a blind alley having to invent dark matter to get their sums to work. There are at least 5 other competing hypothesis, here's just one: https://www.space.com/39001-dark-matter-doesnt-exist-study-suggests.html

Of course we've heard of Wormholes Ben - they live on Wimbledon Common and pick up litter.

Anon, have you looked at the work of Joao Mygueshu. He says the speed of light can vary. This fits in with the repeating of the Michaelson-Morely experiment that got different results indicating there is an electromagnetic ether.

Hi Ben, you are right to stop giving space to these cocky trolls who just want to upset your great work. Personally I think in 10 years if not sooner you will be a household name and very wealthy. But more importantly you will be right, proven right on everything you say. I think there are aliens amongst us, living next door to us and creating things like smartphones etc that no human could do. That idiot talking about Einstein sounds like a right prick and I'm glad you didn't answer his daft questions. A troll of course and you will defeat them and their voice and it'll be another of you great achievements.