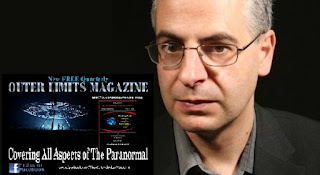 See here for essential background: http://hpanwo-voice.blogspot.co.uk/2017/07/the-larry-warren-controversy-part-18.html.
In previous articles in this series I've mentioned several times the curious involvement of Nick Pope in the Larry Warren controversy. I would have thought such matters were way off the bottom of his priority list; however, he has been wading into the scuffle with ever increasing enthusiasm. As with Sacha Christie, his involvement began with social media posts, but now it has progressed to an article in Outer Limits Magazine. This is the second of two articles he has contributed to Issue 9 of the magazine and the one in question can be found on page 58, see: https://issuu.com/scoop123/docs/olm_issue_9. It's called "Theft at East Gate"; that's the kind of pun Sacha normally comes up with and I can't help wondering if she devised it for him. Nevertheless the text itself does appear to be in Nick's own style so I don't deny he wrote that himself. Two points initially struck me during my first reading of this screed. Firstly, Nick makes a series of factual claims: Larry Warren forged documents, Larry Warren traded counterfeit rock and roll memorabilia, Larry Warren faked a photograph of himself with John Lennon, Larry Warren made threats of violence, Larry Warren purloined elements of his story from genuine witnesses, Larry Warren is not a military veteran and only completed his first phase of training, Larry Warren fooled Peter Robbins into believing him and Peter has now admitted it. All these claims I have examined in this series of articles as well as two radio interviews, see: http://hpanwo-radio.blogspot.co.uk/2017/05/programme-236-podcast-larry-warren.html and: http://hpanwo-radio.blogspot.co.uk/2016/07/programme-197-podcast-larry-warren.html, and a HPANWO TV film with Larry: http://hpanwo-tv.blogspot.co.uk/2017/05/larry-warren-in-rendlesham-forest-2017.html. My view is that they are simply false. I explain calmly, politely and rationally why I think that. What Nick writes in OLM is totally unoriginal. The second thing that strikes me is the tone; Nick uses a lot of angry rhetoric. The following phrases jump out at me as I skim the pages: "reflects a deeper misogyny"... "Shame on them"... "final unravelling"... "final nail in the coffin for 's credibility"... "half-dozen or so people dishonestly trying to spin events"... "took their beliefs and exploited them"... "shamefully chose to ignore it"... "I and many others find particularly offensive"... and it goes on. Nick Pope never mentions my name, but I am pretty sure most of these comments are primarily aimed at me. Excessive rhetoric is a sign of a weak argument. It is often used as a substitute for an empirical case where none exists. This kind of language is essentially an act of moral blackmail against the reader. It is warning them: "You'd better agree with me or you are a #BadPerson just like Larry Warren!" See here for more information: http://hpanwo-voice.blogspot.co.uk/2015/01/debating.html.

Nick Pope even claims that there is basically no room for debate at all; no valid space for disagreement. He says: "These supporters, essentially just his friends and family trying to keep the story afloat, are trying to suggest that there is still a debate to be had about this... This isn't the kind of 'controversy' or 'split' that sometimes divides UFOlogy. The matter is beyond debate." And he goes on to compare Larry's story to the Hitler diaries and the Piltdown Man hoaxes; and he urges Larry to confess. Whenever somebody tells you that there is no debate to be had, they are essentially shutting down the discussion. They are excluding all people who differ with them, regardless of their reasons, from the dialogue. This is not only unethical and anti-intellectual; it is also another symptom of a weak evidence-free case. There is never any justification at all to deny somebody who disagrees with you the right of reply. I am perfectly willing to debate anybody... anybody, who thinks Larry Warren is a fraud, so long as they behave in a civil manner. If you go to Part 18, the previous article in this series, you'll see I do just that in the comments box with "MH". I refuse to engage with the central four members of the anti-Larry contingent, but this is not because of their opinions; it is because of their conduct. To close the door on dissent is to fear the exposure rational peer-review will bring to what you know deep down is a logically unsustainable position. Interestingly Nick also compares Larry's story to the Roswell Slides. He says: "There is a parallel to be drawn between the Larry Warren fraud and the Slides fiasco. In both cases the wider UFO community were polarized until a small and disparate group of researchers came forward to expose the falsehood." The Roswell Slides are a totally different situation to Larry Warren. Larry's testimony is not an obvious deception that was only promoted by a handful of people in and was then proved to be wrong literally minutes after it was published. The Roswell Slides were not thoroughly examined and found to be true for over thirty years and were written about in one of the most popular UFOlogy books ever published. The Roswell Slides were not first called into question by a single person straight after they and the owner had had a very acrimonious personal bust-up. The idea that the Roswell Slides might be faked is not exclusively promoted by people who have been either flattered or intimidated into submission by that one person. The solitary piece of new information Nick tables is that Larry Warren was supposedly rumbled in 2000 by the journalist Georgina Bruni, author of the early classic among RFI books, You Can't Tell the People, see: https://www.amazon.co.uk/You-Cant-Tell-People-Definitive/dp/033039021X. Georgina Bruni is not available to give her side of the story; she sadly passed away in 2008. However, Larry has made another video with Tino to give his version. Nick portrays Larry and Bruni as bitter enemies, but they were actually quite good friends, see: https://www.facebook.com/permalink.php?story_fbid=736170389907977&id=100005450688010. Nick includes in the article a profile of the future: "Where do we go from here? What are the wider implications for the credibility of the Incident and, indeed, the credibility of UFOlogy? What lessons can be learned?" I see the situation very differently from Nick for obvious reasons. He ends that section with these chilling words: "The UFO community will be able to say with justifiable pride that lessons were learned from this experience and that they weren't afraid to clean house. Because, frankly, if UFOlogy doesn't learn to police itself then nobody else will." UFOlogy already has four self-appointed policemen, people who are willing to carpet-bomb the entire community into fragments if only they can destroy their hated personal enemy; and it is personal, nothing more. Nick cannot have failed to hear the real tone these people use, the behaviour they have exhibited, and understand their true motivations. Nick, your article is nothing but a piece of propaganda. There is a brief editorial at the head of the first page which restates Outer Limits Magazine's neutral position in the controversy. They invite Larry Warren to write his own account of events for them to publish. About time too and I look forward to that! Maybe the inevitable and predictable response from the LWHC to Larry's own piece will give the journal a more enlightened viewpoint on this conflict.
See here for the next part: https://hpanwo-voice.blogspot.co.uk/2017/08/the-larry-warren-controversy-part-20.html.
See here for more background: http://hpanwo-tv.blogspot.co.uk/2016/06/scottish-ufo-and-paranormal-conference.html.
And: http://hpanwo-radio.blogspot.co.uk/2017/05/programme-236-podcast-larry-warren.html.
And: http://hpanwo-voice.blogspot.co.uk/2016/09/truth-mobbed-again.html.
Posted by Ben Emlyn-Jones at 14:42

Ben, I called Nick direct in the statea to ask his view on this as I have knkwn him for quite a while. He says that he is 'under pressure to comment in the right way'. I can honestly and 100% gaurantee that he is still under direction not only by the MoD but also at secretariat level in London. Therefore althougj he is seen as a go to guy in ufology and the media, he is still one that I'm afraid will be directed to murky the waters so to speak.

I have respect for Nick but in this case with Larry I am hugely disappointed that he listening to a shill such as Sacha Christie. Nick I know you will read this comment but you are very wrong about Larry.

Blimey, Darren! Did he really say that? Under pressure from whom?

I can't believe this. You would have thought that someone who makes a living out of being in the public eye and speaking 'moderately' and responsibly about phenomena - the so-called 'expert voice' would refrain from bullying and making unproven allegations. I don't care who started it, or who sold what to whom, or whatever. This has to stop. It's bullying. And it's certainly showing those most vocal in a terrible light. I would have thought the better part of valour would be to shut up and refrain from childish ranting, if only to protect your own reputation as a sensible, impartial observer. I'm certain the British MOD will not be at all impressed with this mud slinging. Whatever you think you know about LW or anything else, this is not the way to conduct yourself in public. Or anywhere else. Pathetic. Have a word with yourselves.

To clarify if there is any doubt - my comments are aimed at Nick Pope and Sacha Christie. The only person to behave with complete dignity in this is BE Jones in my opinion.

Completley agree with your comments I was and still am being trolled and bullied online by idiots in the ufo community, who thinks its good to ridicule someone because they dont agree with his opinion.

Those idiots in Canada, Wales and the UK have now turned focus on themselves from people outside of the ufo community, and karma is a deadly thing it can ruin your life in many ways.

I think that Ben has been totally transparent and honeat with his opinion.

Thanks for your supportive comments, Darren and Anon. It means a lot to me when I've had so much abuse :-)