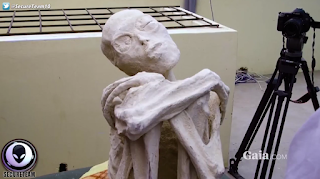 The news of some strange mummified bodies being found in hit the internet earlier in the year. Some unnamed individuals had located six desiccated humanoid cadavers in the region of near the famous Nazca Lines. This is quite close to the where "Ata", the tiny humanoid investigated by Dr Steven Greer was unearthed, see: https://www.youtube.com/watch?v=5C_-HLD21hA. So this is not the first time signs of life possibly not of this planet have emerged in that part of the world. The people who found the mummies alerted a local researcher who in turn contacted the famous Mexican UFOlogist Jaime Maussan. The Inca civilization that rose in in the 13th century used to mummify bodies, but these mummies are different. They have strangely-shaped skulls and hands with only three very long fingers. Their feet only have three toes. A hand like this turned up a few months earlier in another place in , see: https://hiddenincatours.com/strange-alien-hand-found-coast-peru/. The bodies have been hidden in a secret location. This is as much to protect them from black market treasure hunters as covert government interference. The downside is that mummies not kept in properly controlled conditions can deteriorate. Jaime Maussan managed to get carbon dating done on the bodies and they lived between AD 240 and 450, far older than the Inca culture. The institute running the investigation agreed to invite Steve Mera along to assess the situation. Steve is a good friend of mine who has a reputation for being level-headed and does not hesitate to call male cow excrement when required. He has also been supervising the research of Don Philips, see: http://hpanwo-radio.blogspot.co.uk/2015/07/programme-147-podcast-phenomena-project.html. Steve had to travel to , a city in that used to be the capital of the Inca Empire until it was defeated by the Spanish conquistadors in the 16th century. His experience is reported by Brian Allan in his article in Phenomena magazine, see: http://www.phenomenamagazine.co.uk/. There was a tense atmosphere in the city. Steve's journey had been ridden with airport delays and once he'd arrived he was warned by his local guide not to speak openly about why he was there, including the mobile phone calls and texts he made. The Peruvian authorities were taking a keen interest in the matter. The local mainstream media were claiming it was a hoax. Then, in an occurrence that resembled a scene from an Indiana Jones movie, Steve and his team were picked up by a car which drove them to a secret location high in the . He was warned to leave his mobile phone behind; alarmingly this was because of it potentially being used by intelligence agencies to track him. The first bodies they were shown were fakes and Steve said so, but it turned out this was some kind of test. More bodies were then brought in and the most interesting one was the largest, an adult female the size of a normal human, nicknamed "Maria". It was covered in a white powder that might be diatomite, a substance used in the process of making mummies.

It is vitally important to make sure that these specimens are real. It is still not long ago since the embarrassing debacle of the Roswell Slides, see: http://hpanwo-voice.blogspot.co.uk/2015/05/my-last-word-on-roswell-slides.html. This must have been very much on Jaime Maussan's mind at the following press conference. This was held on the 11th of July in 's capital. The dialogue was in Spanish, but Steve had an interpreter and he periscoped live on Facebook from the venue during the breaks. However the authorities remained uncooperative and Steve's wi-fi signal mysteriously failed at certain crucial moments. "Just a coincidence, nothing to worry about." as David Icke would say. The staff at the hotel where the conference took place were also very disruptive. At the same time the mainstream media were interviewing skeptic scientists who insisted that the mummies were all fakes. I was hoping this issue of Phenomena would provide a final answer, but it is too soon to tell for sure. In Steve's view, the large mummy is real and the smaller mummies are merely effigies of some kind. They might have been placed with the real mummy during burial for ceremonial reasons. The artefacts were found in quite a sizable tomb that could indicate "Maria" had been a personage of some importance. The mythology of North and speaks continuously about "Gods from the sky" coming to earth and interacting with humans in ancient times, as was documented many years ago by the Swiss researcher Erich von Däniken, see: https://www.youtube.com/watch?v=j6dO91N0ZbQ. Could this be physical evidence that these old folk tales are true? This fascinating new case emerged just a short time after the aforementioned "Ata" and also the Starchild Skull from . The Paracas Skulls might also be such evidence, as well as the discoveries by Maria Wheatley. It might even turn out, with the ultimate irony, that there was a grain of truth behind the cringe-worthy story of the Roswell Slides, see background links below. It's a pity we don't yet know for sure. Steve did as good a job as he could against the hardships and hindrance he endured from the obstructive authorities. He also had altitude sickness because he comes from and so is not used to climbing tall mountains. The good news is that he obtained all the data he needed from the mummified corpse. This will provide a full biological profile soon, so hopefully the answers are coming. I will post an update when they arrive.
See here for background: http://hpanwo-voice.blogspot.co.uk/2016/02/the-starchild-skull-and-twin-towers.html.
And: http://hpanwo-voice.blogspot.co.uk/2016/01/paracas-skulls-are-not-human.html.
And: http://hpanwo-voice.blogspot.co.uk/2017/05/roswell-slides-update.html.
And: http://hpanwo-radio.blogspot.co.uk/2016/09/programme-203-podcast-maria-wheatley.html.
Posted by Ben Emlyn-Jones at 18:47