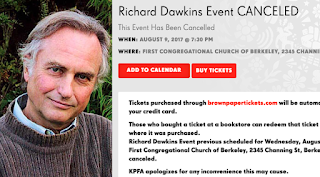 Richard Dawkins has blundered into controversy again. Through no fault of his own, his naive staggering pathway has once more led him into a collision with twenty-teens social realpolitik. This is not the first time he has inadvertently stirred up a hornets' nest and in the background links I relate some other examples. He was banned from the NorthEast Conference on Science and Skepticism after Tweeting an anti-feminist satirical animation. He also decided to plant his flag with the most hardened Remoaners and demand stays in the European Union despite the result of the Brexit referendum; otherwise he'll scream and scream until he's sick. This time it's a slightly different situation. He was due to give a live presentation at a congregational church in hosted by KPFA Radio, a local radio station. The event was about Dawkins' new book Science in the Soul- Selected Writings of a Passionate Rationalist. However the hosts cancelled the event because of, once again, Dawkins' social media activities. He made some Tweets that the hosts considered Islamophobic and they said that they: "cancelled a book event with Richard Dawkins when members of our community brought our attention to Dawkins' abusive speech against Muslims... We serve a broad and diverse community, including many Muslims living under threat of persecution and violence in the current political context. Islamophobic rhetoric stokes that threat. While Mr Dawkins has every right to express his views, KPFA has every right not to sponsor and profit from an event spreading them. That is what we’ve done." Source: https://kpfa.org/blog/statement-decision-cancel-richard-dawkins-event/. Dawkins denies this charge. A statement from his organization said that it was: "stunned and deeply dismayed by the cancellation of an event with Prof. Richard Dawkins... KPFA not only cancelled a standing engagement to have Richard speak on his new book... but did so without contacting him first or giving him the opportunity to respond to their unfounded allegations. The station alleged without evidence that the world renowned evolutionary biologist had engaged in 'abusive speech,' against Islam, a justification that we consider absurd... For KPFA to suddenly break its commitment to Richard and the hundreds of people who were so looking forward to seeing and hearing him is unconscionable, and the baseless accusation that Richard has engaged in ‘abusive speech’ is a betrayal of the values KPFA has, until now, been known for.... 'The idea that I have engaged in abusive speech against Islam is preposterous, which even the most rudimentary fact-checking by KPFA would have made clear,' said Prof. Dawkins. 'I have indeed strongly condemned the misogyny, homophobia, and violence of Islamism, of which Muslims, particularly Muslim women, are the prime victims. I make no apologies for denouncing those oppressive cruelties, and I will continue to do so.'" Source: https://richarddawkins.net/2017/07/letter-to-kpfa/.

Dawkins makes it clear that there is a distinction between Islam, the ancient religion; Muslims, people who believe in it; and Islamism, the recent political movement inspired by it. He says that he used to like KPFA and was a regular listener during the two years that he lived in . They have an admirable social conscience and they're normally good at fact checking, but this time they have refused to produce any source material or explain their actions other than with a groundless assertion. Another feature that has recurred and has clearly upset Richard Dawkins is the lack of any dialogue. KPFA made this decision unilaterally without any discussion at all with Dawkins first. The first thing he knew about it was when he received an email notifying him that he'd been cancelled. The same was done by NECSS last year, see background links. I sympathize there because the same was done to me, see: http://hpanwo-voice.blogspot.co.uk/2017/04/im-banned-from-conference.html and: http://hpanwo-voice.blogspot.co.uk/2017/04/the-larry-warren-controversy-part-11.html. Most of Dawkins' atheo-skeptic colleagues have spoken out in support of their friend. Steven Pinker said that KPFA: "have handed a precious gift to the political right, who can say that left-leaning media outlets enforce mindless conformity to narrow dogma, and are no longer capable of thinking through basic intellectual distinctions." Perhaps it would be more accurate to say that KPFA's actions have simply revealed that the left-leaning media are exactly that. You won't often hear this from me: Richard Dawkins is completely right. This is censorship by politically correct cowards who are so scared of offending people that they hardly dare breathe. Why should Islam be ring-fenced from criticism? The answer I would give is very different to the one Dawkins would or even the anti-SJW community in general; it is the role Islam has been manipulated to play in contemporary geopolitics, see here for more details: http://hpanwo-voice.blogspot.co.uk/2017/06/anti-muslim-attack.html. Nevertheless the free speech issue is the same from all our positions. I hope that KPFA will reconsider and rescind in the same way NECSS did last year. They will if they've got any awareness of their public image and they wish to avoid a good public shaming. They deserve every word of what people have said about them.
See here for background: http://hpanwo-voice.blogspot.co.uk/2016/02/richard-dawkins-banned.html.
And: http://hpanwo-tv.blogspot.co.uk/2017/03/richard-dawkins-patronizing-git.html.
And: http://hpanwo-voice.blogspot.co.uk/2009/08/richard-dawkins-at-ted-2009.html.
And: http://hpanwo-voice.blogspot.co.uk/2016/02/richard-dawkins-has-stroke.html.
Posted by Ben Emlyn-Jones at 20:57