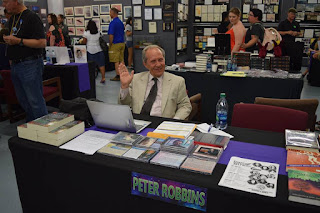 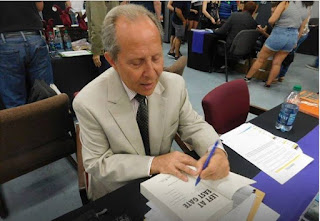 See here for essential background: http://hpanwo-voice.blogspot.co.uk/2017/06/the-larry-warren-controversy-part-16.html.
In the above background link Peter Robbins makes a statement about his split from his former friend and co-author Larry Warren. The statement is mostly about personal matters, not factual issues, but it does make Peter's position fairly unequivocal. Therefore I was surprised to hear from delegates at the Roswell UFO Festival that Peter had turned up there and been given a stall in the merchandise alley. Somebody took a few photographs; and they weren't secret ones snapped from behind a corner. Peter looks quite happy to pose for them. As you can see, he is sitting there signing copies of Left at East Gate perfectly normally, cheerful as ever, as if nothing had happened. In his statement Peter never said that he was withdrawing LAEG from print. He responded to a recommendation from Nick Pope to do so by saying: "Nick Pope's suggestion that it be taken out of print because it is filled with lies enraged him (Larry Warren) and didn’t make me any too happy either... Any decision to end Left At East Gate’s twenty year-long production run has nothing to do with what Larry, or Nick, or I want. In 2005 Larry Warren and I signed a contract with Cosimo Press, a small print-on-demand publishing company in ... For me it has remained a point of pride to know that it remains in print. I’m sure that Larry would never dream of informing our publisher of any of the matters touched upon here, but he (the publisher) more than most people not only has a right to know what has been going on, it would be completely immoral not to do so; the unhappy job of which of course falls to me. If he, after reading this, which he most certainly will, then decides to drop the title, Larry will only have himself to blame for it." After reading these words I find it baffling that Peter would ask for, or accept if it was offered to him, a book-signing at the Roswell UFO Festival. If Peter has decided to keep the book on sale then naturally I would expect it to remain available from the publisher, bookshops and on sales databases. Peter doesn't discuss details of the contract, but he might need the publisher's explicit permission to recall the title. The publisher might decide to keep it on the market against the author's will, or at least sell off any remaining copies already printed for the retail arena. Nevertheless, surely no publisher can demand that Peter continue to promote the book personally by hosting book-signings at conferences; the decision to do that must have been Peter's alone. Why would he do that when just a few weeks earlier he had written a piece denouncing his co-author and, as a result, repudiating most of the information in LAEG? What's more, based on these photographs, he appears to be signing the books enthusiastically. It's impossible to know Peter's motives for sure, but this smacks of indecision and uncertainty. His behaviour is totally contrary to his professed opinions. This must raise the obvious question: If Peter is so unsure about his position then it calls into question his entire statement. How can he expect anybody to take it seriously again after this? 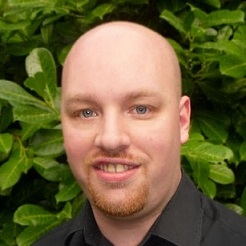 I must pay homage to Dave Hodrien, chairman of the Birmingham UFO Group. Dave is a good friend and fellow researcher; and I'm even more proud to say that than usual after he spoke openly about Larry's detractors' position with plenty of necessary sceptcism with a C. He went camping in to celebrate ten years of BUFOG and Larry, Heidi, Tino and many others went along too. I regret not being able to attend myself. As a result of his statements Dave has been predictably attacked by the anti-Larry mob on a personal level. This was made worse by his prominence in the UFOlogy community. Nevertheless he has stood his ground, therefore displaying considerable courage. He even attempted to debate with them, but of course he was not given a fair hearing; see here for my recent HPANWO Radio interview with Dave: http://hpanwo-radio.blogspot.co.uk/2017/03/programme-231-podcast-dave-hodrien.html. I hope he will set an example to others. There are a lot of people who know the truth and are afraid to speak out because of the anti-Larry terror campaign. At the recent UFO Truth Magazine Southern Conference 2017, see: http://hpanwo-voice.blogspot.co.uk/2017/04/ufo-truth-magazine-southern-conference.html, I spoke to a friend of mine who has so far publicly vacillated over the matter. I said to him: "This thing against Larry Warren; it's bullshit. It's all bullshit. Totally! From start to finish." He responded by replying without any hesitation or doubt: "I know, Ben." If he knows, then I urge him to say so out loud. He is not alone and there are a growing number of people who will stand by him.
See here for the next part: https://hpanwo-voice.blogspot.co.uk/2017/07/the-larry-warren-controversy-part-18.html.
See here for more background: http://hpanwo-tv.blogspot.co.uk/2016/06/scottish-ufo-and-paranormal-conference.html.
And: http://hpanwo-radio.blogspot.co.uk/2016/07/programme-197-podcast-larry-warren.html.
And: http://hpanwo-voice.blogspot.co.uk/2016/09/truth-mobbed-again.html.
Posted by Ben Emlyn-Jones at 18:28

Ben, like myself, you, Larry, Dave and many others we were attacked and set up because of our beliefs and research into the UFO phenomena. The 'anti mob' as I like to call them really should be very careful because one day their acrions will come back to bite them. Its just a matter of time...

I still have issues with the idiots in Canada and their affiliates but i was lucky enough to have help on that, and that will be sorted in good time.

There are people in ufology who have closed minds and they are the ones who try and riducle others they feel threatened by.

People like Sacha are causing a shit storm for themselves and they dont realise...

On another note try and find the former Planet X Live radio show episode with Peter Robbins that may be of interest ;-)

Hi Darren. That's true, in fact it is already coming back to bite them. More and more people are standing up to their bullying which is great to see. I might have the show you mean in my archive. Is the YouTube channel still up?