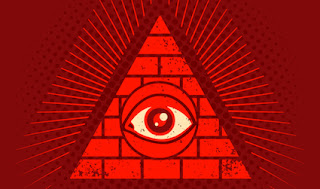 A short article has come to light with the brazen claim that because of the random and irregular nature of the modern political world, conspiracy theorists have been proven wrong. I deeply resent its racism... yes, white people can experience racism too... and also its highly unoriginal and toxic appeal to anti-Semitism (See here for more details: http://hpanwo-radio.blogspot.co.uk/2016/05/programme-188-podcast-jews.html) Despite all this, the article makes some interesting points. I've followed the presence of the hidden hand for over twenty years now via "the internet" "from my bedroom" and have made numerous predictions that have come true because of its existence; just look at what I've posted online over time on the HPANWO websites and you can see for yourself. Source: http://www.thedailymash.co.uk/news/society/conspiracy-theorists-finally-convinced-no-secret-society-could-possibly-be-running-this-mess-20160724111302. (I've found out since that this is a satirical spoof website. Still the idea remains valid) Yet for the last few years I have had the distinct impression that the hidden hand's grip is weakening. This year especially; see the background links below for details. Specifically the Brexit situation and Donald Trump becoming the new President. My predictions were completely wrong on both these events. There are only a few possibilities that can explain this. One is that the current affairs of the world are controlled by the hidden hand; it's just that the hand has achieved such a level of subtly and cunning that we conspiracy theorists can no longer detect its machinations. I have been fooled, but my tin foil hat-wearing peers have not; and they've told me so in no uncertain terms. The problem with that theory is that it is unfalsifiable. Any evidence refuting a conspiracy theory is interpreted as nothing more than just another even craftier manoeuvre by the conspirators. This is one thing the skeptics have got right. The other possibility is that the premise of the source article is correct and there simply is no hidden hand; and I've been wasting my time in delusion for the last two decades. Based on what I've learned I honestly don't think so. However, there is a third possibility: Could this be springtime in Narnia? By that I mean the power of the Illuminati is truly crumbling at the most fundamental level. The reason the power structures of the world are behaving so haphazardly is because they haven't had a call from head office for a very long time. It seems hard to believe when you look at the world around you, and I'm not saying this is the end of the New World Order. In fact I've always said that the fall of the NWO would be followed by a very turbulent transitional period. It could be a long time and we could suffer great hardship before the world settles down into the post-Illuminati age. But could this be the beginning of the end? From the lyrics of a song by Tracy Chapman: "finally the tables are starting to turn." No doubt the doom-addicts of the conspirasphere would dismiss what I've said as naive and hopelessly optimistic; naturally with their sense of superiority that goes with their self-congratulatory worldly-wise pessimism proudly displayed on their sleeve. However I'd therefore like to ask them, by what criteria would they officially declare the NWO over? According to their logic, it can never be seen to end. Time will tell, but if the chaos in the world continues and deepens, how much longer can we doubt? This can only be good news. However traumatic is will be to break our dependence on the Illuminati I think we can do it. We must! Nothing could be worse than things just carrying on as they are.
See here for background: http://hpanwo-radio.blogspot.co.uk/2016/11/ben-emlyn-jones-on-mind-set-podcast-133.html.
And: http://hpanwo-tv.blogspot.co.uk/2016/11/president-trump.html.
And: https://hpanwo-radio.blogspot.co.uk/2016/06/programme-193-podcast-eu-referendum.html.
And: http://hpanwo-tv.blogspot.co.uk/2016/06/brexit-reality.html.
Posted by Ben Emlyn-Jones at 15:24

I have no doubt in my mind that you are correct in your assessment Ben. The appalling reaction of the NWO to the EU referendum and now the US election demonstrates just how much the rot of cultural Marxism had set in - it transpires that so-called liberals do not appreciate democracy! Perhaps the shock of Brexit is acting like the snap of the hypnotist's fingers on the brain-washed?

I'm glad I'm not the only one, Laurence! I take it you mean the so-called "protesters", the thugs and riot mobs funded by George Soros. Also it turns out that Gina Miller KNOWS George Soros! Says a lot!

They're the ones Ben...and FYI George Soros has been known to fund Cultural Marxist Constitutional agitator's in Ireland. Supposedly he believes that Ireland is a good test case for a Cultural Marxist takeover of a former religiously conservative culture. Today Ireland, tomorrow Iran etc.

No surprise there, Laurence. I bet he's good mates with Peter Sutherland too.