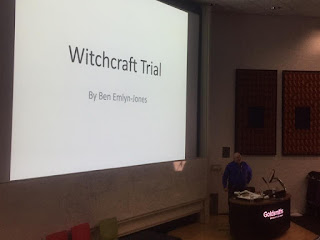 The ASSAP Seriously Suspicious Conference that I advertized here: http://hpanwo-voice.blogspot.co.uk/2016/09/ben-emlyn-jones-at-assap-seriously.html, has gone ahead with great success. The Association for the Scientific Study of Anomalous Phenomena holds regular conferences on specialized matters as well as their annual Seriously Strange weekend event. That was in this year and I badly wanted to attend it, but it clashed with UFO Truth. They've done an event about Vampires, "Seriously Staked"; demons, "Seriously Possessed"; and UFO's, "Seriously Unidentified". I'm glad they decided to do one about conspiracy theories too. I must pay special thanks to Alyson Dunlop who was a speaker at the conference and recommended me to the organizers, see: http://hpanwo-radio.blogspot.co.uk/2016/01/programme-173-podcast-alyson-dunlop.html. The event was held in a lecture theatre at Goldsmiths, ; it is a large college in Lewisham consisting of buildings of various architectural periods tucked in between shopping streets and railway lines near the docklands. About a hundred people attended; a good crowd. I met up with some folk I was already acquainted with and met some new faces as well. Two friends accompanied me, Andrew Burlington, known online as "Victor Nevada", see: http://hpanwo-radio.blogspot.co.uk/2016/07/programme-196-podcast-alien-interview-20.html, and Colin Woolford, see: http://hpanwo-tv.blogspot.co.uk/2016/10/alien-autopsy-and-anthony-peake.html. One of the speakers was the King of the Skeptics himself, Prof. Chris French of the Anomalistic Psychology Unit at Goldsmiths. He's actually a really nice guy and we got on very well. He did one of two lectures about satanic ritual abuse. He disagreed strongly with the other speaker who covered the subject, Tim Tate. The speaker I was most looking forward to hearing was Prof. Karen Douglas, a social psychology expert from the . She gave a lecture outlining her views, but I managed to have a private word with her and she gave me more information. We talked about her recent publication that was rather heretical in nature, see: http://hpanwo-voice.blogspot.co.uk/2014/10/conspiracy-theorists-more-sane-than.html. My old friend Andy Thomas turned up and discussed the logical reasoning behind conspiratorial ideas. It was good to hear somebody talk about how conviction to do with conspiratorial thinking can be based on evidence, not just fallacies and delusion. Christopher Thresher-Andrews is a student of Prof. French's and he did an interesting talk, with audience participation, about confirmation bias and other cognitive functions that he believes can make us more susceptible to conspiracy theoretical ideas. This involved playing games and thought experiments. Trystan Swale couldn't get there in the end. I must admit I was relieved. I'm not sure exactly how we would have interacted if he had been there; but I assure you, despite everything, I would have behaved professionally for the sake of the spirit of the conference and I was willing to show him basic courtesy, see here for background: http://hpanwo-voice.blogspot.co.uk/2016/08/trystan-swale-and-my-perceived-racism.html. My own talk was a condensed version of my lecture on Helen Duncan and the 1944 Witchcraft Trial, including new updated information, and it went well. The audience enjoyed it. Here's an online review: http://www.badwitch.co.uk/2016/11/seriously-suspicious-conspiracies-helen.html. I don't think the event was filmed, but if it wasn't I'll record a studio version of my talk. All in all this was a really good event. Thanks to Norie Miles and everybody else who organized it. Thanks to the speakers, and thanks to everybody who came along.
See here for the studio facsimile of my lecture: http://hpanwo-tv.blogspot.co.uk/2016/11/ben-emlyn-jones-live-as-assap-seriously.html.

Some more photographs of the day: 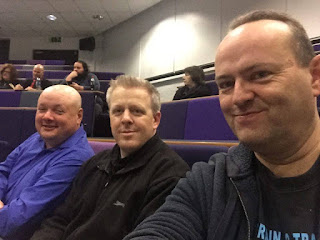 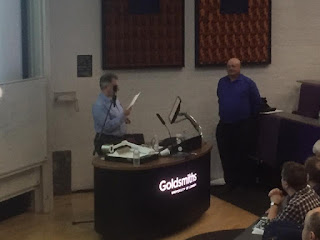 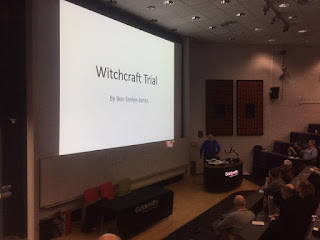