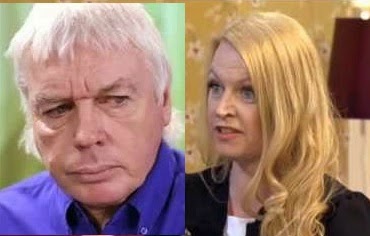 I intend this article to be as short as possible. I hope it will be the last time I have to write one like it, but of course it won't be; therefore I plan to expend as little time and energy as possible on it, the exact opposite of a lot of other people's intentions in the Truth movement. If you need more information then read the background links. I've been aware of this issue for some time but have only just decided to comment for the reasons I go into below and in those background links. In the aftermath of the downfall of The People's Voice, regrettably but predictably, fingers began pointing. Why had it happened? Who was to blame? Where's the donation money gone? David Icke himself was one of the first to speak publicly, see: https://www.youtube.com/watch?v=l4-91aX701Y. The principle antagonist in David's narrative of the TPV debacle is Sonia Poulton, an independent journalist who, unlike most of her fellow newsmen, speaks openly about conspiratorial ideas. She has struck back vocally against David Icke's accusations, see: https://www.youtube.com/watch?v=Z_32yFRi7OQ, and: https://www.youtube.com/watch?v=G6F4bewllQ4. As always, I leave HPANWO readers to look at both sides and make up their own minds up. The point here is not who's right and who's wrong, the point is that again... yet again... we have a personal dispute that has snowballed into a fully blown truth mob. Once again a cluster of supporters are gathering around both figures waving placards and throwing paving stones at each other. Once again both sides expect everybody else to join in. Once again, they will try to press-gang the undecided masses into adopting their cause, often by using rhetoric, moral blackmail, threats and insults to force compliance. It wouldn't be so bad if they at least behaved sensibly and respectfully towards others. But no, you have to join one side or the other; "you're either with us or with them!" Anybody who doesn't want to get involved, like me, is immediately accused of indecision and weakness. Either that or one side will assume that you're on the other by default. Here's an example: The other day I was invited to join a Facebook group called David Icke is Full of Shit!; when I declined I was immediately branded with the label of "not wanting to hear alternative views!" about my "messiah!". Messiah? Do I really need to explain what a ridiculous and unfair thing that is to say? Regular HPANWO readers know very well about my changing viewpoint and mixed feelings related to David Icke because of my review of his recent Wembley lecture, see: http://hpanwo-tv.blogspot.co.uk/2014/11/david-icke-live-2014.html. Why on Earth would anybody claim that David is my messiah? It's because the person who said that is a supporter of Sonia Poulton. I've not said a bad word about Sonia Poulton, in fact the only time I've referenced her at all in the past was to praise her, see: http://hpanwo-voice.blogspot.co.uk/2014/04/uniforms-for-unemployed.html, but it doesn't matter. Because I've not joined her "side!" in this one-to-one tussle she's having with David Icke. I am therefore completely against her, and religiously and devotedly supporting David Icke. In a truth mob every point is polarized; in fact it's only a matter of time before supporters of David's "side!" will accuse me of being an Icke-basher, of being of his ex-wife Pam's accomplice, of sexually fancying Sonia Poulton, or of working for Richard Warman's legal campaign against David. You see? Polarization! Truth mobs are not capable of rational analysis and discourse; everything is black and white. You're either with them or against them, see: http://hpanwo-voice.blogspot.co.uk/2015/01/debating.html. Unfortunately truth mobbing is taking up a huge amount of time and energy that could be spent more productively, and this situation is getting worse. The background articles below on Danielle la Verite, Kevin Annett and Darren Perks have had some of the highest viewing figures, and the most comments, of anything I've ever posted. There are even certain people within our community who now do nothing else except truth mobbing. They've effectively appointed themselves the amateur armchair policemen of the conspirasphere.

Great post Ben. Your ending summary is spot on.

Thanks, X. I'll be going back to my usual subjects now :-)

Hello Ben. I was impressed with your article here. What you point out is very important. Many people have already noticed the negativity and hatred that is building in the truth movement. I understand your article is really intended as a statement on your unwillingness to pass judgement on a complicated issue. You effectively highlight a much more disturbing revelation. On several occasions you used the word "Truth" when referring to these groups of people. Does that not seem anachronistic?

Here we have a collection of individuals who all claim to align themselves with the same movement. Yet what we witness is a melee. The only trait all participants share is a desire to denigrate anyone dissenting.

Could you imagine the NWO conspirators being able to organise anything as detrimental to human excellence and enlightenment as what is before us? Or perhaps their involvement is more intricate than we could have imagined? Are you aware of the Archon? I am sure you are. David spoke about them at his Wembley talks. Beings here to enslave humankind. Creating chaos and disharmony. Feeding off the negative energy that is created.

Ben, not say you are naive but have you ever considered your fight against the NWO may actually be an essential part in helping them achieve their goal? Think about it. An ever growing multitude of people. Learning not from experience but from a constant feed of conflicting information. Descending in to conflict and confrontation. Confusion and negative energy. Exactly the diet the Archon feast upon.

May I humbly suggest the time has come when you and others take a step back. Pause from following those who speak with forked tongues. Like cancer cells using the body's own immune system to attack healthy cells, you are being manipulated to do the work of those you have been told you are fighting. Time to start questioning why all news has to be negative. Time to break the spell. Open the eyes. Awaken. I do not direct those words to you specifically. They are ideas you should help spread amongst those who are bickering. Those who polarise themselves to the point of fanaticism will only invite negative energy in to their universe. They will stunt any potential growth the human soul still has remaining. None of us want that to happen.

Do you have the time to do another Voice article in the future? We need someone to begin the process of awakening others. All those who oppose a NWO have something to lose by ignoring what is happening. We are told that we are awakened. Are we just being tucked in to a different bed? One which only summons nightmares? In the movie Inception they had a test to see whether they were still dreaming. We don't have a spinning top. All we have is the awareness to recognise who is encouraging negative energy. Please Ben. You have the platform. You have the following. Can you make a difference? Our futures may depend on it.

Hi Anon. Thanks for your comments, I will ponder upon what you've said. I'm sorry if I've dwelt too much on one aspect of this subject matter and I have material lined up to broaden out a bit more. What you've said reminds me very much of Terence McKenna of whom I'm a big fan (So sorry he died young) The film Inception was not bad, however its points were not as well illustrated as some others, like The Matrix, especially where Neo meets the Architect. All the best.

Those that truth mobbed me Ben are now suffering. Good article mate and very true and to the point.