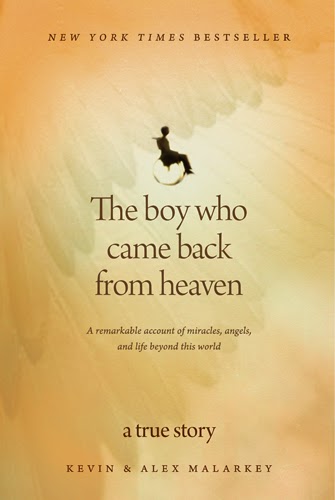 I've written before about how one should always beware the CTCS, "conveniently-told confession story", see: http://hpanwo-voice.blogspot.co.uk/2013/11/this-man.html. Another case in point has just come to light, that of Alex Malarkey, a six year old boy who was involved in a terrible car accident in 2004. He suffered catastrophic head and spinal injuries and spent two months in a coma; all his doctors thought that he'd die, but amazingly his condition slowly improved. He was completely paralyzed and mute, yet over the course of a number of years he learned to walk and talk again, albeit only partially. When his speech returned he began telling his parents that he'd been sentient at some point during the two months of his coma and had gone through a near-death experience. Together with his father Kevin he wrote a book describing his experience entitled: The Boy who Came Back from Heaven, a True Story; it was published in 2010 and became an overnight New York Times bestseller. Books on first-hand near-death experiences are very popular, especially in the where Alex lives. Other good examples of what is sometimes facetiously called "afterlife tourism" are Dannion Brinkley's Saved by the Light and Proof of Heaven by Dr Eben Alexander. However most of these tend to be religiously neutral and propose a general ecumenical spirituality. The Malarkeys' book is very different; it's distinctly Christian in theme. Alex describes going through the gates of Heaven, accompanied by angels, and meeting Jesus; he saw Satan emerging through a hole in the sky. The story is faithfully in line with Biblical ideas and popular Christian cultural symbols. Its publisher, Tyndale House Publishing, specializes in evangelical Christian literature. However within a year of the book's launch the family began making informal statements that suggests the book's story was at least partly fabricated. Nothing official was said, but in 2011 Alex wrote in one of the book's Facebook groups: "one of the most deceptive books ever..." The comment was deleted by the group's admin and Alex was banned, suspected of being an impostor. However the following year his mother Beth confirmed that the group member had indeed been the real Alex and she supported his pronouncement; the book was a fraud. Later on she claimed that the book was an "exaggeration" and "embellishment" on a Christian radio talk show. Alex supported her statement and last week, , Alex, now aged seventeen, wrote an open letter to Tyndale House which included a full confession and a request that the book be withdrawn from sale: "Please forgive the brevity, but because of my limitations I have to keep this short. I did not die. I did not go to Heaven. I said I went to heaven because I thought it would get me attention. When I made the claims that I did, I had never read the Bible. People have profited from lies, and continue to. They should read the Bible, which is enough. The Bible is the only source of truth. Anything written by man cannot be infallible. It is only through repentance of your sins and a belief in Jesus as the Son of God, who died for your sins, even though he committed none of his own, so that you can be forgiven, may you learn of Heaven outside of what is written in the Bible… not by reading a work of man. I want the whole world to know that the Bible is sufficient. Those who market these materials must be called to repent and hold the Bible as enough. In Christ, Alex Malarkey." Tyndale responded two days later on January the 15th by saying that they'd voluntarily take the title out of print and recall as many copies of the book from retailers as they could. Source: http://www.washingtonpost.com/blogs/style-blog/wp/2015/01/15/boy-who-came-back-from-heaven-going-back-to-publisher/.

The Skeptics have responded as they always do to these confessions, they've immediately and instinctively accepted it without any question, and without hesitation they call "case closed!" and they refuse to consider it further. That happened when Bob Gimlin claimed he faked his famous home movie of Bigfoot, even though it was later proven that his story couldn't be true unless his wife was seven feet tall, see: https://www.youtube.com/watch?v=1lDF-NAOraQ. This typical attitude is very palpable in the latest episode of Skeptics Guide to the Universe where the panel discuss Alex Malarkey's supposed revelation; see (from 28 minutes in): http://www.theskepticsguide.org/podcast/sgu/498. They are also berating various religious booksellers for not removing the title from their shelves sooner when Beth first came clean in 2012; the Skeptics suggest that the booksellers thought that the truth didn't matter so long as it told a good story. However that's probably unfair; accusations like Beth's are not enough alone to justify immediately action, especially since she's apparently now separated from Kevin. Also there has been some contretemps she's been having with Tyndale and her ex-husband Kevin over the distribution of the book's royalties. At no point in the SGU show above do Bob, Jay, Steve and Evan even consider whether the Malarkeys are being completely sincere in their confession. A confession is a confession is a confession... full stop! Nevertheless I have some serious doubts over what's really going on here. To begin with Beth's and Alex' testimonies don't match. Beth claimed that the story was an "exaggeration" and "embellishment" whereas Alex states that it was completely made up; there's a big difference between these two things. Also Alex' father and co-author Kevin has been strangely silent. Is it possible that Alex' confession is false? The first thing that strikes me about Alex' words is that he is clearly a staunchly fundamentalist Christian and for a brain-damaged young man he's extraordinary eloquent. It's perfectly possible that his recovery has reached the stage where he can indeed speak and write to that degree, if so I'm very pleased for him; but one still should not hold back from asking that question. I'm afraid I usually find people who are as religious as that very unreasonable and often dogmatically opposed to almost everything that falls short of their own piety, including their own actions in the past. Alex' beliefs may be clouding his view of things he said beforehand. It's likely that Alex was far less devout when he was writing the book than he is now; in fact he says clearly: "When I made the claims that I did, I had never read the Bible..." Why not? If he had been a Christian his whole life he would certainly have read the Bible from the moment he got to grips with his ABC's. So could it be that Alex is a born-again evangelical Christian who is constructing a falsified past for himself, as many people do who change their minds about something central to their lives, and thenceforth feel embarrassed by what they perceive as their misspent youth? Beth, it seems, was unhappy with the book's content from the start and she complained that "the truth is getting twisted, distorted, and packaged to be sold to the highest bidder." Beth is also feeling the grind of the celebrity lifestyle. She says she regularly experiences fans of the book knocking on her door unannounced to pay the family a visit; she finds this irritating and intimidating, and is concerned for the effect it's having on the fragile health of her son: "[Alex] is just a boy not a statue to be worshipped or person with some supernatural gifts... He does not go to heaven, have conversations with supernatural beings, and whatever visions/experiences he has had or had not had, is up to him as to what he will do with those." There may be any number of motives, known only to herself, why Beth would want the affair finished with and for her and her family to return to a normal life. She wouldn't be the first to make a fake confession in such a quest; Margaret and Kate Fox, the so-called "inventers" of Spiritualism, did so, see: http://hpanwo.blogspot.co.uk/2011/04/paranormality-by-prof-richard-wiseman.html. Beth's own disapproval sounds very different from Alex', as I say. The references to the Bible are absent, and also she has never formally stated that the book was completely made up, only that the story is not an accurate portrayal of real events. I don't know for sure. I've only recently even heard about this case, but could it be that the deceit on the part of the Malarkey family has not ended with their confessions, but has just changed its false message? Perhaps Alex really did have a near-death experience during his two month coma, but it was one of the more conventional variety. Then, for whatever reason, when he and his father were compiling the story into a book, they imparted on it a flavour that American churchgoers would approve of. Maybe they were given an informal advance, or another incentive, from their Christian publisher on condition that they did so. Who knows? I don't wish to pass judgement on them for that, merely to get to the bottom of this complex and contradictory tale. I also wish once again to warn the Skeptics against being too eager to jump for the bait when confessions like this appear. Just because a confession is one converging with your worldview doesn't make it empirically true just because of that. It might be equally as false, or even more so, than any statement you come across diverging from the paradigm of the Skeptisphere.
Posted by Ben Emlyn-Jones at 18:24

Just the name Malarkey rings alarm bells. LOL
Can you get the brain damaged person on your show, Ben ?. Might be a good lark.

Hi Steve. Alex Malarkey would be an interesting guest. Bolerhatman has asked to be on a CMR show and I said "no", but maybe I should invite him on. I've had Skeptics on my show before, like Trystan Swale.