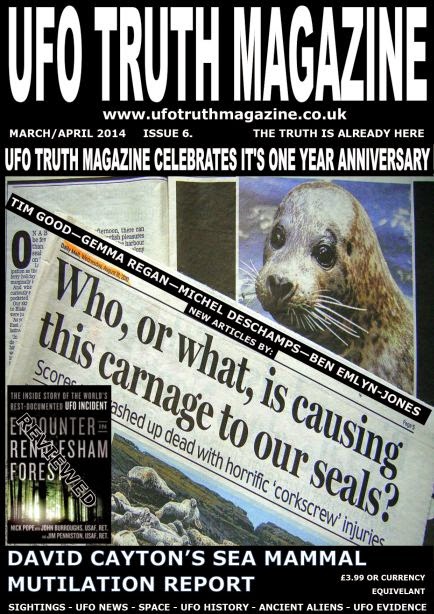 I am now a columnist for UFO Truth Magazine and my first article has been published in Issue 6, the first anniversary special edition. It can be purchased on this page as a single copy, but please subscribe and save money if you want to read my column regularly: http://www.ufotruthmagazine.co.uk/subscriptions-shop/. My article in this issue concerns the strange case of the "Nottinghamshire Roswell" from 1987; see here for background: http://hpanwo-tv.blogspot.co.uk/2014/02/notts-roswell-2.html. Also in this HPANWO Show programme on Critical Mass Radio I interview the UFO Truth's editor Gary Heseltine: http://hpanwo-radio.blogspot.co.uk/2014/03/programme-81-podcast-gary-heseltine.html.

This fascinating journal also features an article by David Cayton on the most frightening and worrying aspect of UFO's, the mysterious animal mutilation phenomenon; and Richard D Hall explains how Homo sapiens is not absent from the long list of species thereof effected. There is also an obituary to the late great Dr Roger Leir who opened up the world to the presence of the strange implants that keep appearing in people's bodies via unknown circumstances. A flying triangle in , a transcript of an aircrew's discussion during a UFO encounter in , a Nazi flying saucer appearing over in 1945, and much much more can be found in this bumper special edition of UFO Truth Magazine.
Posted by Ben Emlyn-Jones at 19:52