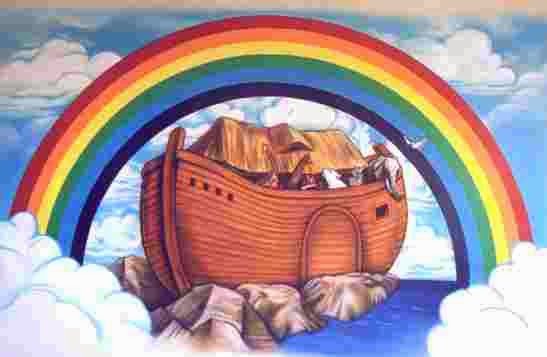 "The movie everybody's talking about!" at the moment is Noah, a Biblical epic by Darren Aronofsky starring Russell Crowe, Anthony Hopkins and Emma Watson. I've not seen it and don't feel inclined to, and so will comment no further on the nature of movie itself until I do, for reasons I state here: http://hpanwo-voice.blogspot.co.uk/2008/06/critics.html. The film is based on one of the oldest stories in the world. It appears most famously in the Book of Genesis, but that is actually only its most recent edition. The same basic plotline: Virtuous man living in a sinful world, God decides to destroy the world through a giant flood, God saves the good guy and his family by instructing him to build a boat to ride out the flood, good guy gets into boat taking animals with him, after flood good guy and his family repopulate the world with lots of little good guys; it's a constantly recurring theme. This is the basic story of Manu in the Indian Rig Veda and part of the Sumerian Epic of Gilgamesh. The tale was probably inspired by even older folk histories and oral traditions dating back to the people who witnessed the end of the last ice age in 12 to 10,000 BC. I can find no other source for the word ark referring to any kind of boat or ship; but it is clearly boat, one without sail, engine, oars, or any other kind of propulsion; it was designed merely to float. The Bible describes it in some detail; it was 450 feet long, 75 feet wide and 45 feet high, putting it in the same size category as some modern ocean-going vessels. As the flood waters receded the eventually grounded on in what is now eastern . After that we don't know what happened to the , whether Noah and his people broke it up or whether it deteriorated to nothing from the wear and tear of nature; or did Noah's people preserve it as a historical relic? Many people have travelled to the location to try and find the , starting as long ago as the First Century with the Roman historian Josephus. Marco Polo and Sir Walter Raleigh also tried to find it. The best known of these "Ark-eologists" in modern times was the Apollo astronaut James Irwin, a devout Christian who also tried to locate the Exodus route and the footsteps of Moses on . On a US Air Force plane flying over Ararat took a photograph of a large black object sticking out of the snowy flank of the peak. It has been dismissed as nothing more than a rocky outcrop, but others say it is a part of the Ark. There are many unsubstantiated claims of people who reported that have found petrified wooden beams etc, but that is hearsay alone. 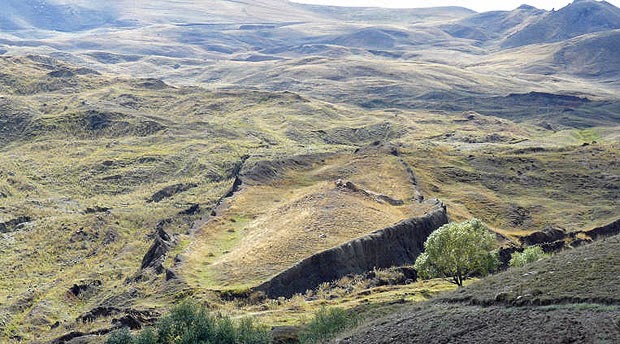 There is only one expedition that has produced anything substantial in terms of evidence and that was the one led by Ron Wyatt which investigated the Durupinar anomaly. This is an oval shaped rocky structure lying on a piece of flat land near ; this is eighteen miles away from Ararat, but I guess Noah must have made a mistake. It's only two miles from the border with and has been inside a recurrent war zone for many decades, making study of the site difficult. The anomaly was discovered by the Turkish military in 1948 and was first visited by Ron Wyatt in 1977. It is roughly the size of the as described in Genesis and has curved lenticular sides ending in a point at either end, which is an elementary feature of ship design. However it is heavily eroded and most geologists think it is nothing more than a curiously-shaped rock. A study with a metal detector revealed the remains of an iron framework in a regular pattern and nearby carved slabs were discovered that resemble drogue stones; these are flat stones with a hole bored through them that were used as ship anchors in ancient times. These are curious objects to turn up two hundred miles inland. However researchers soon lost interest in the place after nothing decisive came about from a full excavation. The drogue stones turned out to be grave stones from an early Christian cemetery and the iron grid is just minerals deposited from a volcanic eruption. I'm not surprised that the Durupinar anomaly has been explained as natural. The thing is, the story of Noah's , as it is related, is impossible. There has been a global flood, as I said, when the last ice age ended, and this caused the sea level to rise three hundred feet. Vast areas of coastal land were taken by the oceans, but the survivors didn't need to build boats, they just moved to higher ground and got on with their lives. At no point in the geological history of the Earth has the entire planet been submerged by the ocean. If this did happen then all life on land would be wiped out and once the water receded, aquatic creatures would have to evolve legs again before things returned to normal. Noah could not possibly have saved life on land from the flood. His was far too small for even a handful of animals, let alone the all food, fresh water and other supplies they would need. The movie Noah gets round this illogicality with a clever plot device: Noah puts the animals into a deep sleep with magical incense. But "two-by-two" wouldn't be enough; you'd need several hundred of each species to restart a breeding population from scratch. Even with the animals all in a God-decreed mystical coma you'd need a ship the size of . And what about the plants, the fungi, the bacteria? It cannot be done. However, many of these ancient stories are symbolic; I don't think their authors ever intended them to be taken literally. Could they be a reference to some form of life preservation measure carried out either by a human mystery school or extraterrestrials? When serious UFOlogy began in the 1940's, for the first time those who have had contact with beings from another world were listened to and taken seriously, if only by a small community of supporters. One of the messages contactees are often given by their extraterrestrial friends is their concern for the Earth's environment. They are deeply worried that it is under threat due to human warfare, toxic waste, radiation etc. They say that they are harvesting DNA, or other kinds of life essence, from the Earth's biosphere to preserve it. In this way they're creating a non-genocidal and non-evil equivalent of Bill Gates' seed vault. It's also not unlike what Noah did with the animals and humans on the Ark. Could the story of Noah's have been inspired by an archetypal or subconscious memory of contact with extraterrestrial beings?
Source: https://www.youtube.com/watch?v=i7iycpe16V0.
Posted by Ben Emlyn-Jones at 20:16