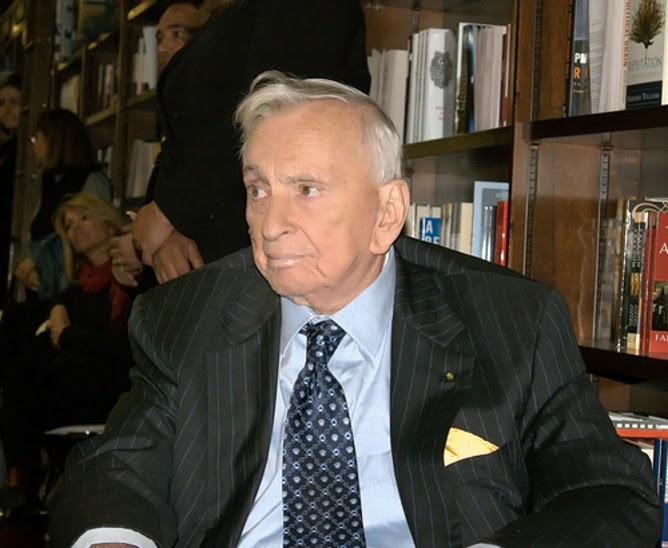 Gore Vidal was one of 's most famous liberal intellectuals. The word "liberal" in the has a slightly different meaning to what it does on this side of the . It tends to refer to anybody who is not a table-thumping redneck. Sixty years ago such Americans were even more erroneously called "communists". For many years Vidal was close friends with Christopher Hitchens, another major left wing public figure, but their friendship came to an abrupt and bitter end over the attacks of September the 11th 2001. Vidal, a much older man, had described Hitchens as his "Dauphin". Dauphin is a French idiom that literally means "dolphin", but it refers to a royal title, a prince of the realm or heir to the throne. What Vidal meant was that Hitchens was his young protege whom he wanted to take over his role of principle leftist academic in the after his own retirement. On the back cover of Hitchens' autobiography Hitch 22 a comment by Vidal has been published: I have been asked whether I wish to nominate a successor, a dauphin. I have decided to name Christopher Hitchens. However a big red cross has been printed over the text and handwritten beside it is: No. This gimmick is fairly typical of Hitchens; his animosity towards others was always a very public affair.

Both men are now dead. They died within a few months of each other. I wrote an obituary to Christopher Hitchens at the time, see: http://hpanwo-voice.blogspot.co.uk/2011/12/christopher-hitchens-dies.html; I think enough time has passed since Hitchens died to dispense with the excessively maudlin charity I think I granted him in that piece. I was being truthful when I said I became enthralled by Hitchens. I did read two of his books and watched hundreds of hours of his lectures and, especially, his debates. I read a book by Richard Seymour called Unhitched- The Trial of Christopher Hitchens, see: http://www.versobooks.com/books/1159-unhitched. It is told from a Marxist perspective, but was still an interesting read. As I said in the obituary, I don't think Hitchens was always sincere about his beliefs, especially in his later life. He was a man who craved controversy at all costs. His professed viewpoints may not have come from his heart, but rather from whatever part of him needed to indulge in his chosen sport, and career. He was such an intelligent and articulate man that his underlying motive is very hard to spot. He'd have made a fantastic lawyer! One issue he always refused to debate was 9/11 conspiracies; in fact this was his response when somebody raised it in a Q&A: https://www.youtube.com/watch?v=VL7MuzkJ6Ew. Whether he really feels that strongly about 9/11 conspiracies or not, I don't know; but one thing's for sure, he knows it's a debate he can't win. As he admitted himself: "I can't bear to lose an argument". Unfortunately Gore Vidal trod over that line when he spoke out about his own views on 9/11. The 9/11 Truth Movement has many different ideas and factions within it. One of the most obvious is the divide between those who think thermite was used to demolish the and those who think a secret directed energy weapon was wielded that day. I include myself in the latter (This division has caused many rifts, not least in my own personal life, see: http://hpanwo-voice.blogspot.co.uk/2013/09/the-911-civil-war.html). However there is a more fundamental categorization. Both thermite theorists and no-planers are "MIHOP's"- Made It Happen On Purpose. There is another idea, "LIHOP"- Let It Happen On Purpose. This is a somewhat more conventionally acceptable viewpoint whose implications are not quite so explosive. LIHOP states that the official story is true, in that Osama bin Laden's henchmen did hijack the planes, the planes did hit the towers and Pentagon, and that the impact of the planes and subsequent fire really was what caused the Twin Towers to collapse; but elements within the US Government knew that Al Qaida were planning and orchestrating the attacks and deliberately turned a blind eye allowing the Muslim terrorists to carry out their operation unhindered. Gore Vidal wrote an article in which he hinted that he was a LIHOP; he already had similar views over the attack of 1941, that the US Government deliberately left the base undefended so that could destroy it and therefore draw into World War II. Vidal said about 9/11: "I'm not a conspiracy theorist, I'm a conspiracy analyst. Everything the Bushites touch is screwed up... They could step aside... or just go out to lunch while these terrible things were happening to the nation. I believe that of them." For Hitchens this was too much and he wrote an article of his own called Vidal Loco in which he denounced his former mentor as a crackpot. I applaud Vidal's courage and honesty and I feel sorry for him; anybody who has ever been "Hitch-slapped" knows how spiteful and self-righteous Christopher Hitchens could be. He had no mercy for his opponents, only an urge to inflict as much harm on them as he could. However, the LIHOP position makes no sense. The authorities, at whatever level they operate in this case, didn't just let Osama bin Laden get away with 9/11. There was no involvement of bin Laden at all. 9/11 was a black budget false flag attack orchestrated by the very authorities who then harnessed the public's reaction to their agenda. Source: http://www.independent.co.uk/news/people/news/christopher-hitchens-attacks-gore-vidal-for-being-a-crackpot-1891753.html.
Posted by Ben Emlyn-Jones at 18:56