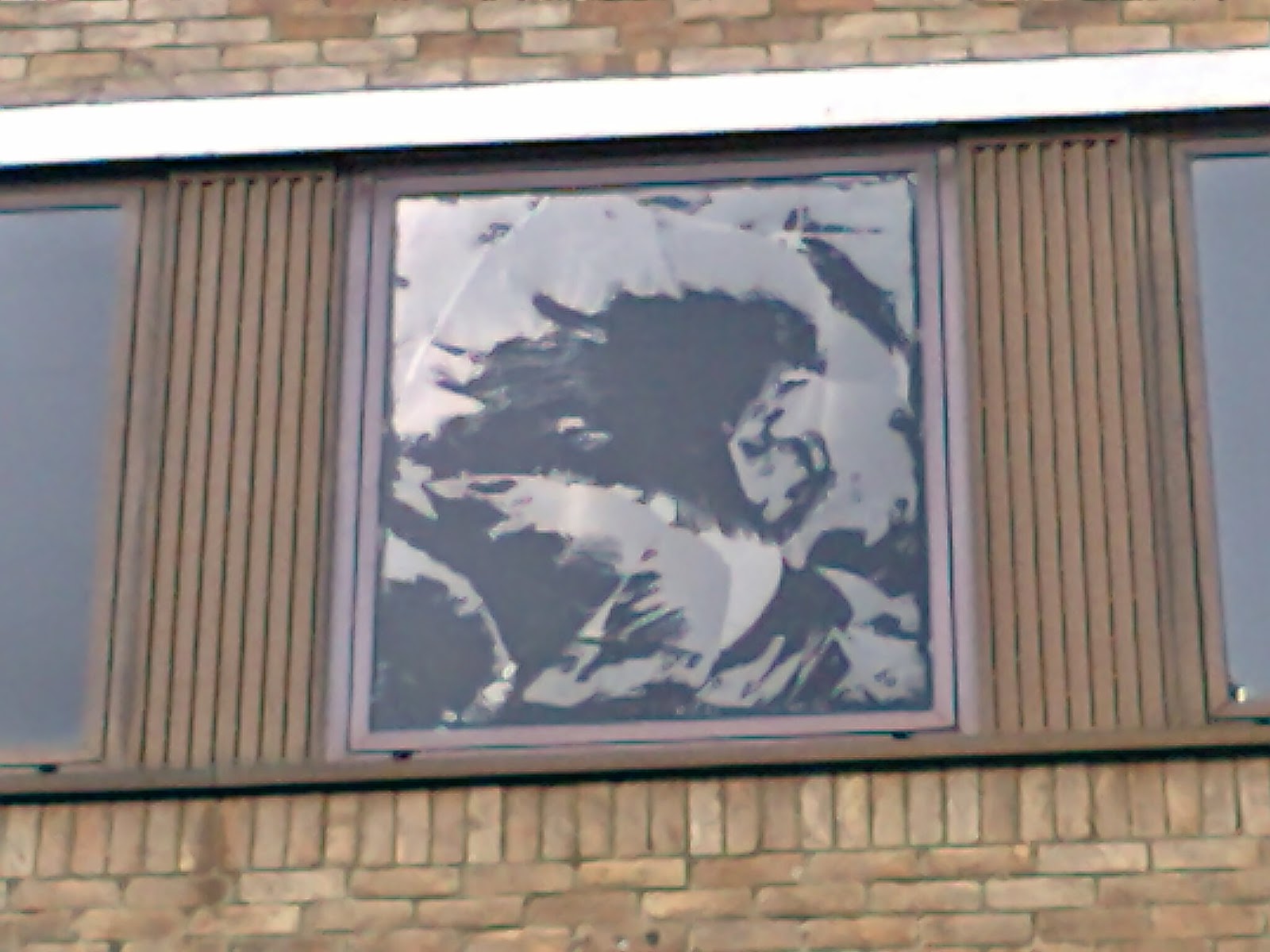 Pareidolia is a subject I recently covered in a controversial CMR interview I did with the Fortean researcher Trystan Swale, see: http://hpanwo-radio.blogspot.co.uk/2014/03/programme-79-podcast-trystan-swale.html. It is a human psychological phenomenon in which we see recognizable forms where there are none. An example could be seeing a cloud that appears to be the same shape as the or the face of an old man in the lines of the bark of a tree. Our brains seem to be geared towards perceiving recognizable shapes and we will often pick those shapes out of completely random patterns. The same goes for our other senses; when it comes to our ears we might hear recognizable sounds in white noise, like voices calling our name in the hissing of a badly tuned radio. I was recently walking through and I saw something that caught my eye, something stencilled on a window; I ended up photographing it, see at the top. My first thought was that this is a picture; it looks to me like the head of a monkey or ape. It's in profile facing right; you can see its snout, its right eye and thick fur on its head. This hair is streaming out behind its head as if blowing in the wind and the artist has captured this dynamic feature of the image very skilfully; you can just see the monkey's ear poking out through its hair. You can see its shoulders and arms in the picture and it seems to be wearing clothes as if it's an anthropomorphic simian from a science fiction story, maybe a "super-chimp" from a novella by Arthur C Clarke. It looks like its running; its right arm is pulled back and its left is forward. You can just see its left hand at the edge of the frame and it appears to be holding something in it that looks like a gardening trowel. All in all that snapshot-like energeticism is apparent in the entire tableau. It's a great work of art I think... But then is it? Could it be that I'm not seeing a picture at all; I'm just seeing a random pattern caused by the metal foil liner on the pane being torn? Therefore my brain has done its job well by interpreting the meaningless rips and scratches on the liner as a recognizable form. The big question, the one I wanted to discuss with Trystan, is: how can I know?

It's a question that you might think is easy to answer; a picture is obviously a picture, and a random pattern is obviously a random pattern, isn't it? Yes it is, if you have proof that what you're looking at is artificial, in that there is a known artist involved whom you're positive definitely produced that work, but what if there isn't? What evidence do you have to go on if you come across what looks distinctly like a painting or sculpture, but it is totally anonymous? If you decide that it is indeed a synthetic work of art then how do you make that judgement? If you think about it, the answer must be somehow to quantify the resemblance the alleged image has to the real object it supposedly represents; for instance, if you come across what looked like a painting of Mother Teresa on a wall (Or in a teacake; this actually happened, see: http://www.bbc.co.uk/news/magazine-22686500!), and it was totally anonymous. Then you'd have to ask yourself how closely the painted image resembles the real Mother Teresa; to do that scientifically you'd have to invent a practical mechanism with some kind of scale. Once that was designed there would have to be a discussion about what "level of closeness" would become the universally agreed cut-off point between what was to be considered a random pattern and an artificial image. a statistical ceiling. This so far has never been done and therefore pareidolia has become something of a trump card for Skeptics, an unfalsifiable wreaking ball that they can drive into any debate to end it forever. If you're ever in such a situation with a Skeptic then I recommend making this point. After all, if I wanted to be a truly obsessive curmudgeon I could claim that the Sistine Chapel murals are just random patterns. Michelangelo just got in a temper one day and kicked some cans of paint around the room; what resulted is a completely haphazard splash of flying paint drops and if you see any recognizable shapes there of cherubs, naked angels and Hands of God, then I'm afraid it's just your brain interpreting those splashes as organized imagery when there is none in fact there. If you think what I've said is ridiculous then you need to enter into this discussion to define exactly where we draw the line between the random and the intentional, otherwise I'm entitled to use that argument as heedlessly as you do. This is very important when it comes to anomalous phenomena because the pareidolia Joker is so often played to discredit cases like the Face on Mars or the Solway Firth Spaceman, see: http://hpanwo.blogspot.co.uk/2008/03/solway-firth-spaceman.html and: http://hpanwo.blogspot.co.uk/2007/08/face-on-mars.html. One man, Mark J Carlotto, has attempted to clear the question up by writing a computer programme that "measures artificiality", see here for more detail: http://www.exopoliticsgb.com/article/measuring-artificiality, but this is not a task to be undertaken by any one individual; there has to be a consensus formed so that any future discoveries of this nature can be calculated precisely and the studies can then skip over that tedious hurdle that's been holding them back for so long. What applies to the visual sense applies to many other things too, as I discuss with Trystan in the link above. It is very important when it comes to analyzing evidence collected for the electronic voice phenomenon- EVP. When is a voice a real voice and when is it just us mistaking white noise for a voice? After the interview I play some music and I joke about how good random noise can sound!
Posted by Ben Emlyn-Jones at 18:15