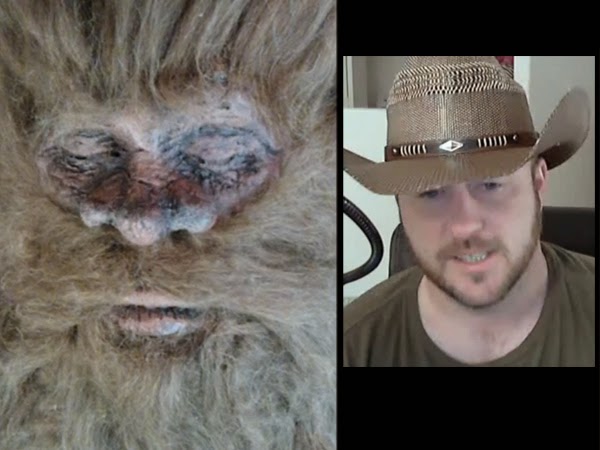 There are people in this world who lie and deceive others for a comprehensive purpose, usually to profit in some way parasitically; but every now and again somebody will tell a lie which makes me wonder what on Earth motivates them. Case in point: Rick Dyer, the so-called Bigfoot researcher. In 2008 Dyer and his friend Matthew Whitton make the explosive announcement, that they had discovered the dead body of a Bigfoot while out walking in the woods in Georgia USA. They said they took the corpse to a secret location and put it in a deepfreeze to preserve it. They published photoes of the supposed body and became overnight media stars. Their scoop was enthusiastically aided by a cryptozoologist called Tom Biscardi. The three of them sounded extremely confident as they faced the cameras and flashbulbs of the press, describing in detail the anatomy of the cadaver, down to its intestines. Then a few days later Whitton and Dyer admitted that the body was just a model made of rubber and a fur coat. Really? Why did they pull such a futile hoax? They sat in front of those cameras knowing... knowing... that the very first question both the media and Bigfoot research community would ask is: "Well, can we see the body please?" Why would anybody launch themselves into a duplicity that they knew very well could never come off? However, it gets much much worse. In September 2012 Dyer burst out into the street again with yet another incredible story. He had shot and killed a Bigfoot, and this time he was for real... honest! He had lured the beast into a pit trap baited with beef ribs and deer urine. He then shot it. This time he decided he would reveal the body... or at least show it to people in the boot of his car... for a fee of course. He went on a road tour of the and people queued up at every stop to view "the corpse of Bigfoot!". Dyer also claimed to have had this body tested by scientists with DNA analysis and MRI scans; and he planned to publish the results, very soon. Then, a few days ago Dyer confessed that it had all been a hoax. He said: "I'm a joker. I play around; that's just me. I have made lots of people mad but a thousand times more smile!"

I've discussed Bigfoot several times before, see: http://hpanwo-radio.blogspot.co.uk/2013/06/programme-51-podcast-cryptozoology.html and: http://hpanwo-voice.blogspot.co.uk/2013/10/yeti-found.html. I'm almost certain it exists. This cryptid, an animal not yet formally recognized by science, is said to inhabit the remote regions of and is clearly some kind of primate, from the biological family of apes and monkeys. However, despite being covered by fur like most apes are, it is very different from the rest of them. It has never been seen climbing a tree and it has flat feet. It also stands upright. There's only one other primate in the world which has these features, and you can view a specimen by looking in the mirror. This means that Bigfoot, the Yeti, the Yowie and creatures like it, must be either a part of the genus Homo which also includes Neanderthal Man and modern humans; or it's a completely different genus of primate that split off from the apes much earlier, but has evolved in parallel with all the Homo species and developed similar traits such as permanent ground dwelling, erect stance and a large brain. Could it share our level of intelligence? I can't help wondering if somebody out there knows very well that Bigfoot and his cousins exist but wants to keep it quiet. This doesn't just involve secrecy and suppression, but also what Andrew Johnson calls "muddle up", disseminating contradictions and disinformation to breed confusion. Maybe the authorities in this world are afraid of how the revelation of a new species so unsettlingly similar to ourselves might have on our psychology and culture. It would cause a serious rethink on many issues, from religion to animal rights. Thanks to Biscardi and Dyer this agenda is now well advanced. I don't know whether Dyer is actually doing what he does deliberately or whether he's just a cretin, but the effect is much the same both ways. A friend of mine, Trevor Murray, is not only a Brother Porter and a colleague on Mind Set Central, see HPANWO Radio, but he's a Bigfoot researcher. I sometimes wonder what would happen if he ever came up with some convincing evidence for the existence of Bigfoot. I have a nasty feeling that people would be far more hesitant to believe him than they would have been if it wasn't for these brainless and preposterous deceptions by mountebanks like Rick Dyer. Source: http://www.nydailynews.com/news/national/bigfoot-hunter-admits-lied-killing-beast-article-1.1740325.
Posted by Ben Emlyn-Jones at 22:03