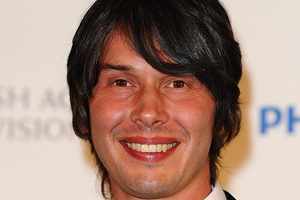 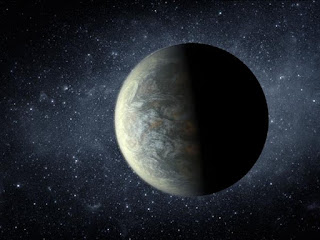 (Thanks to my friend Val for bringing this story to my attention)
The pop physicist Prof. Brian Cox has been told by the BBC that he is not allowed to point the Jodrell Bank radio telescope at the newly-discovered planet Threapleton Holmes B during his live TV show Stargazing Live. See: http://news.uk.msn.com/odd-news/bbc-feared-breach-by-alien-signal-1 This planet is not in orbit around the sun like Venus and Jupiter etc, but is an "exoplanet"; it orbits a completely different star, in this case one over 600 light year away. It is the first exoplanet ever to be discovered by amateur astronomers. Cox was told by the producer that if Threapleton Holmes B has intelligent life on it that is broadcasting radio signals which could be picked up by the telescope, one of the most powerful in the world; then these signals might breach the BBC's editorial guidelines. The corporation claimed that it might also cause an issue over health and safety regulations! As you can see in the linked article, a radio interviewer joked with Cox that they were worried that the aliens might swear on live TV!
Prof. Brian Cox has recently emerged onto the Skeptic scene, and I've written about him before, see: http://hpanwo.blogspot.co.uk/2011/09/knobs-for-cox.html (I never did send him his doorknob. Sorry!) He therefore probably doesn't quite appreciate that there's a sinister undertone to this humourous story. The BBC may well have been briefed by people who take very seriously the idea of extraterrestrial intelligence and also understand the social, cultural, economic and political implications of the publicly acknowledged revelation that it exists. In 1960, right at the start of the American space programme, the psychological think tank The Brookings Institute released a report in which is advised NASA on what to do if the signs of extraterrestrial civilization, present or past, were to be discovered by one of their projects. The answer: It would be best not to shout it from the rooftops! In other words, there's every chance that the Government knows extraterrestrial life does exist and is covering it up. This is why they've also made programmes ridiculing and dismissing the idea of UFO's, see: http://hpanwo-voice.blogspot.co.uk/2012/10/bbc-conspiracy-road-trip-ufos.html I'm not sure UFO's are actually extraterrestrial in the conventional sense of the word, in that they're from other planets like Threapleton Holmes B, but whatever they are and wherever the do come from similar concerns obviously apply to them. The BBC has probably been given a secret contingency plan relating to extraterrestrial intelligence which is why they reined in Coxy's programme. As you can see from the linked article, the BBC are keeping an eye on what he plans to do while examining Mars. Mars today is a freezing, dry and airless world, but there is evidence that in the distant past there was flowing water on the planet. This means that it must have once had a thicker atmosphere and been an awful lot warmer. Perhaps warm enough for complex life to evolve, including an intelligent animal species capable of building structures that could survive until long after their creators had become extinct. The Brookings Report specifically mentions the danger posed by ancient ruined artifacts being spotted on the inner planets. Maybe this is why NASA have so furiously downplayed the significance of the Face on Mars and the rest of the Cydonia complex, see: http://www.youtube.com/watch?v=lI5BzQ4VwNk
Posted by Ben Emlyn-Jones at 15:42