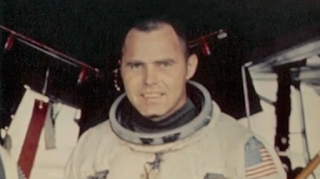 Since Bob Lazar emerged with his incredible story of how he was sent to Area 51 in 1989 and worked on back-engineering crashed flying saucers, the core of his entire case has been his personal testimony. Many have accused him of simply making up the entire account for the sake of fame and fortune (Not that he has gained any of the latter). However, several independent witnesses have backed him up over the years and the latest of these is probably the most prominent; in fact his testimony may well mark a turning point in the Bob Lazar story. The new witness is Capt. David Fruehauf, a highly acclaimed US Air Force pilot who was recruited to a special reconnaissance programme in 1967. His job was to fly what at the time was the most highly classified aircraft in the American fleet, the SR-71 "Blackbird" spy-plane. The pilot was deployed to Area 51 and says he knew that there was an adjacent section of the base which was known as "Site 4" which sounds like what Lazar calls "S4". Fruehauf flew to the base every day from on the "Janet" planes and saw a small group of people leave the terminal in a separate direction from the main facility, towards "Site 4", in a bus with the windows covered, just like Lazar claims. Area 51 is totally compartmentalized and nobody among its personnel is told more than is necessary to do their own job; therefore Fruehauf could not confirm what was going on at "Site 4". However, when his own experience is matched with Lazar's reports, a solid narrative emerges. Lazar's anecdotes about life and work in the secret base rang true to Fruehauf. What's more, when he met up with people in the private sector after he left Area 51, Fruehauf says that they told him they had actually met Bob Lazar on the secret base. Source: https://www.youtube.com/watch?v=dWpPCzWtAvA. The words of David Fruehauf fly in the face of the pat skeptic line that all of Lazar's supporters are losers and loonies. Only the most select corps of pilots would be considered for the SR-71 programme and Fruehauf was one of them. Fruehauf actually survived a crash in which one of the twelve SR-71's lost, of the thirty-two built, came down in an uncontrolled dive, forcing him to eject. What could possibly motivate somebody in his position and with his background to lie? Absolutely nothing (leaving aside the usual groundless whining of "disinfo! disinfo! disinfo!"); and this is the fact UFO skeptics, along with Lazar's critics within UFOlogy, are going to have to deal with.
See here for more information: https://hpanwo-tv.blogspot.com/2018/12/bob-lazar-movie-livestream.html.
And: https://hpanwo-voice.blogspot.com/2018/12/bob-lazar-area-51-and-flying-saucers.html.
And: https://hpanwo-voice.blogspot.com/2014/05/bob-lazar-25-years-on.html.
And: https://hpanwo-voice.blogspot.com/2019/06/the-wilson-notes.html.
And: https://hpanwo-tv.blogspot.com/2019/09/storm-area-51-livestream.html.
Posted by Ben Emlyn-Jones at 23:13