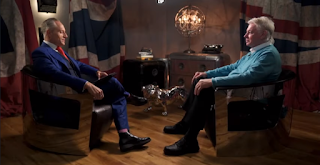 Today is the eighteenth anniversary of the World Trade Centre and Pentagon attacks. This terrible atrocity has come of age. There are now adults walking the earth who have lived their entire life in the post-9/11 world. To mark the occasion London Real interviewed David Icke; the live broadcast began this morning at exactly .
Here is the interview. You will need to submit your social media details to play the recording: https://londonreal.tv/e/david-icke-9-11-the-trigger-the-lie-that-changed-the-world-who-really-did-it-and-why/.
David sits in an armchair opposite the host Brian Rose. David is launching a new book called The Trigger, his twenty-second, which centres on the 9/11 subject; it's his second volume which specializes thus. He dedicates the book to those who died in , in and on those four planes... or supposed planes... on that terrible day. That's an important point to make because it cuts away the most frequent tactic believers in the official story use to attack those who challenge it, see: https://hpanwo-tv.blogspot.com/2011/10/how-to-show-respect-to-victims-of-911.html. Brian Rose was living in on and he watched the whole horror emerge in front of him from a taxi. David describes the basics of the case against the official story, the way it was so politically useful, the destruction of World Trade Centre Building 7 and the way the rubble was so quickly disposed of. He describes his model of the New World Order in which he often uses the analogy of a spider's web with the Illuminati in its centre or in the capstone of a pyramid. Surrounding it are all the secret societies and private thinks tanks and further out, overt organizations like the United Nations and nation states. This is fairly accurate. David also addresses the smears against his character that have goaded mobs into harassing his activities, for example see: https://hpanwo-tv.blogspot.com/2019/02/is-david-icke-evil.html. What is most interesting and unique about this interview is that David appears to be drifting away from his previous position on President Donald Trump. David's attitude to 2016 has always been a bit ambiguous; for example he was previously very pro-Brexit, but at the same time considered Trump just another insider. Yet in the last quarter of this interview he gives a far more positive assessment of the president, even portraying him as a bit of a "renegade", to use his own terminology. Trump's recent dismissal of the neoconservative hawk John Bolton was a bit of a catalyst for David I expect.

I'm a big David Icke fan and David has been very influential on me, especially in the early period of my "awakening" process. I no longer focus on David as much as I used to, but still respect what he does and think he talks a lot of sense. I endeavour to attend his live shows whenever I can, see the background links below. However, David makes some mistakes (like we all do) and some of them are related to his position on 9/11. In this interview he does bring up the "controlled demolition" of the World Trade Centre, but does not go into details about the method of this demolition. He even seems to avoid any clarification on the matter; in fact in a previous interview he said this: "All we need to agree on about 9/11 is that it was created on purpose to provide the excuse for what has followed. That's all we need to agree on. We don't need to agree on whether this substance brought the towers down, or these energy weapons. That might be interesting, but we don't need to agree on that; we don't need to argue over it. We don't need to come into conflict over it, like children... Let's move on!" However, knowing how 9/11 was carried out is essential to uncovering who did it and why. We have heard David say how the official story is incorrect, but he does not provide an alternative correct story. He does provide a reference for an alternative story, but that reference is Architects and Engineers for 9/11 Truth. As I've explained before, this organization is giving out a fake alternative to the mainstream hijackers and plane crash account. See here for details: https://hpanwo-voice.blogspot.com/2018/05/911-truth-event-london-may-2018.html and: https://hpanwo-radio.blogspot.com/2016/03/programme-181-podcast-andrew-johnson.html. If we are led up the garden path into false narratives about rigging the buildings with explosives or using thermite, then we'll become confused and doubtful. When we see these fables disproved we may even be drawn back into the official story... That's the idea I think. Instead of Architects and Engineers for 9/11 Truth, David should refer the viewer to Dr Judy Wood. Not only has Dr Wood carried out a completely independent proper scientific study of the destruction of the WTC, she has also taken the matter to court, see: http://www.drjudywood.com/wp/. I hope David completes his otherwise excellent presentation of the 9/11 issue by addressing Dr Wood's study in future.
See here for background: https://hpanwo-voice.blogspot.com/2016/09/richplanet-show-about-david-icke.html.
And: http://hpanwo-voice.blogspot.com/2015/11/incontrovertible-premier.html.
And: https://hpanwo-tv.blogspot.com/2019/04/renegade-film-review.html.
And: https://hpanwo-voice.blogspot.com/2018/11/david-icke-live-in-newcastle.html.
Posted by Ben Emlyn-Jones at 21:07

The idea of a directed energy weapon (attributable to Rich Planet, I believe) is a very enticing one. However, just as I was about to purchase 'Where did the Towers Go?', the following interview made me think twice: Interview Dr. Judy Wood . This was meant to be a technical interview between two academics in Physics and Material Science but I, for one, was left very disappointed by Dr. Wood's lack of theoretical knowledge and an inability to argue with the interviewer at a technical level. Perhaps Icke's reticence derives from this interview?!

Hi Laurence. The link is dead. Who is the person Dr Wood is speaking to?
Cheers.
Ben

Thanks for the link, Lawrence. I'm familiar with this interview and in my view, Dr JW gets the upper hand, which is impressive seeing as she hadn't slept for two nights (a critic of hers called this the "drunk interview, but it's sleep deprivation). Jenkins keeps working under the assumption that Dr JW is talking about a conventional form of direct energy, like a laser, and not the Hutchinson Effect; this is why he talks about the conservation of energy. Also he tries to make a judgement on the debris distribution and Dr JW corrects him. He does the same sidestep over the falling debris from the snowball. He goes on to blockade the issue again over the size of the rubble pile. He tries to make out Dr JW is wrong over most of the WTC disappearing.

Hello Ben. Thank you for Johnson's review of the original interview. My honest opinion, however, is that Johnson is attempting to cover for Dr. Wood. The harsh truth is that Dr. Wood's interlocutor, if anything, appears to have gone easy, possibly in response to the interviewees insomnia. (In my experience, engineering academics can really go for the jugular should they detect any manner of lack of fundamental physics.) Moreover, why didn't Wood take the opportunity to introduce the Hutchinson Effect? Jenkins would have been genuinely intrigued, in my opinion.

I expect it was because she was so sleepy. Also she was responding to points made by Dr Jenkins rather than proposing her own. The debate was actually very short and lacking in scope. Do you thinm you will still buy Where Did the Towers Go? If you do, you will see it goes into far more detail.

Hello Ben. It would be dependent upon the depth of technical detail. Can you say whether there is technical depth (i.e. plenty of equations)? Is there any peer review?

The book has plenty of those, although it is written with explanatory sections for those without scientific expertise. There are plenty of reviews of the book which range from very positive to disparaging.