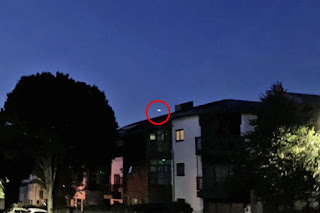 There are reports across southwest of a strange glowing object being seen in the sky that was described as "falling" towards the ground somewhere near , . Others thought it might be an impacting asteroid. A number of 999 calls to the police sparked a huge aerial and ground search operation that lasted all of this morning and the police have released a statement claiming that no wreckage has been found and that it was just a meteor shower. This is a possibility, however the photograph above of the phenomenon does not look like such a shower, in fact specialized astronomical cameras are usually needed to record such a spectacle. Neither do many of the descriptions,. No recorded flights have been lost. Although the most obvious anomalies were spotted by people in and , there have been reports from as far afield as and . Source: https://www.mirror.co.uk/news/uk-news/breaking-police-launch-urgent-search-19877524. (Thanks to my Facebook friend James for bringing this to my attention) What if this is none of those above explanations and it is in fact a crashed flying saucer? If so then we can anticipate a cover-up and secret salvage operation, as we saw in in 1947 and on numerous other occasions before and since then, across the world, see background links below. Whichever country a UFO crashes, the same outcome occurs every time; as if all nation states of the world are obeying the same global policy. If this is a UFO crash-retrieval then now is a crucial opportunity. I'm addressing readers in the area directly: please find out what you can. I am not able to travel to the location myself right now so would be grateful for all and any boots-on-the-ground. We must act quickly before the cover-up is complete. After that the "Plymouth Incident" would become just another piece of conspiratorial and UFOlogical history.
See here for background: https://hpanwo-tv.blogspot.com/2019/03/pentyrch-three-years-on.html.
And: https://hpanwo-tv.blogspot.com/2014/01/berwyn-40.html.
And: https://hpanwo.blogspot.com/2012/04/pre-roswell-roswells.html.
And: https://hpanwo-tv.blogspot.com/2015/02/ufo-disclosure-2015-john-podesta-and.html.
And: https://hpanwo-tv.blogspot.com/2018/03/ben-emlyn-jones-at-sufon.html.
Posted by Ben Emlyn-Jones at 18:45