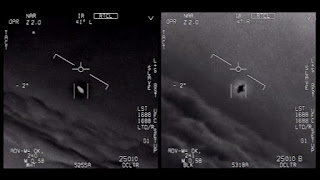 Since December 2017 when the To the Stars Academy first published a series of video clips showing what looked like military gun-camera footage of unidentified flying objects, it has been impossible to eliminate the prospect that the images are merely fakes and that the whole sensation is just a giant hoax. At first, the 2017 news story was met by cagey silence from the government. Then in May this year the Department of Defence revealed that there had indeed been a UFO research project called AATIP, the Advanced Aerial (or "Aerospace" depending on the source) Threat Identification Programme, see: https://hpanwo-voice.blogspot.com/2019/05/pentagon-aatip-confirmation.html. Today it confirmed something else, that the released footage was also authentic, just as David Fravor and the other pilots said it was. This is a major vindication for Cmdr. Fravor and his fellow witnesses. There are still many questions that need answering, see background links below for details, but what has been admitted today is undoubtedly a major step forward. A spokesman for the US Navy, Joseph Gradisher, said that the visual material was indeed produced by the Navy and it did show objects that were regarded as unidentified. The videos were declassified, but were still not intended to be released. Source: https://www.dailymail.co.uk/news/article-7474455/Navy-confirms-three-spectacular-videos-appearing-UFOs-genuine.html. It is most likely that the "Tic-Tac" footage constitutes an accidental leak. However, it could still be the result of a canny person on the inside "working to rule". Hopefully there will be more details released soon. This significant unveiling by the government does not mean they intend to be completely honest with the people from now on. It also does not mean we can lower our guard against the risk of disinformation. However the information control strategy for UFO's is clearly changing significantly; whether this leads to Disclosure, with or without a capital D, or just further and more tangled obfuscation, this fog bank clearly contains something solid inside it, whatever that is.
See here for background: http://hpanwo-voice.blogspot.com/2019/06/ben-emlyn-jones-on-kev-baker-show-48.html.
And: https://hpanwo-tv.blogspot.com/2019/07/ufo-disclosure-2019-storm.html.
And: https://hpanwo-radio.blogspot.com/2019/05/programme-324-podcast-dave-altman.html.
And: https://hpanwo-voice.blogspot.com/2019/07/happy-world-disclosure-day-2019.html.
Posted by Ben Emlyn-Jones at 21:58