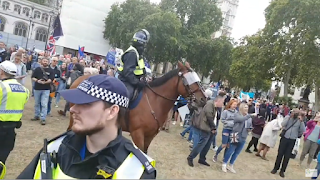 On Saturday I attended the second protest against Brexit being betrayed and I made a HPANWO TV film about it, see: http://hpanwo-tv.blogspot.com/2019/09/brexit-protest-2-bojo-revolution.html. I was one of many independent journalists doing so and I was also interviewed on other people's productions. Firstly, on Anon Media UK's Periscope channel at timestamp , see: https://www.pscp.tv/w/1OyJAemOvwoJb. Periscope is a very good livestreaming platform with a positive reputation for free speech. I also spoke to a man with a very sophisticated double-headed selfie stick and antenna array who was also streaming live on YouTube, see: https://youtu.be/UWe3mYg7uo8?t=9445. Apart from those who caused the trouble later on of course, I was very impressed with the people who were there that day. It was a good feeling to be around these kindred spirits who are genuine, courageous and want to change the direction is going, and the world beyond, from destruction to creation. Despite the rather dramatic end to the demonstration and my own involvement in it, I have no regrets and I'm glad I attended this second pro-Brexit protest.
See here for more background: http://hpanwo-voice.blogspot.com/2019/09/boris-johnsons-speech.html.
And: https://hpanwo-voice.blogspot.com/2019/08/boris-and-nigel.html.
And: https://hpanwo-voice.blogspot.com/2019/08/rockall-and-brexit.html.
Posted by Ben Emlyn-Jones at 17:47

You have created some great films Ben: the Oxford 'Barcodes for Homeless People' is one of the best films on modern-day homelessness that I have seen, for example. Truth be told, I rarely watch anything on youtube above 15 minutes, but I was glued to your production for 2 hours. I sincerely hope that you have recovered sufficiently from yet another London ordeal.

I have thanks, Lawrence. So glad you enjoy HPANWO TV.