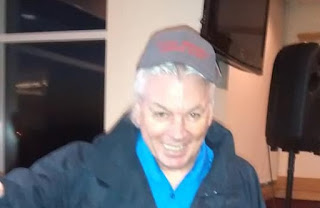 It's been over two years since I last went to a live David Icke lecture. The previous time was in 2016, see: https://hpanwo-tv.blogspot.com/2016/07/david-icke-live-2016.html. A lot has changed since then. We had a Leave vote in the EU referendum and we're still waiting for Brexit to be delivered. I've split up with Sue Ustane. David has had a couple more grandchildren. Also since then there has been an upswing in the recurring cycle of insulting nonsense that David hates Jews. This means he was not able to reveal the venue of his talk until twenty-four hours beforehand. If he had not taken this precaution then his enemies would have threatened the hosts and even turned up to harass the audience with violence; see here for more information: https://hpanwo-voice.blogspot.com/2017/01/is-david-icke-dangerous.html. I headed to the event with my friends from Truth Seekers North East for whom I am doing my own live tour, see: http://hpanwo-tv.blogspot.com/2018/11/ben-emlyn-jones-live-at-truth-seekers.html. I felt a bit like a secret agent as we drove into the racecourse, looking around to see if any masked and angry Antifa gangs were around. Luckily we had given them the slip. We had dinner in the onsite pub and then three of my friends went ahead while the rest of us finished our meal. When we arrived they had grabbed some front row seats. They had met David and taken photos with him, see above. He is wearing an official Truth Seekers North East hat, although he clearly doesn't want to mess his hair up so soon before going on stage. The lecture took place in a large conference room overlooking the racecourse, although at that time of night there were no horses galloping. There were about two hundred seats and all were full; the event was a sell-out. I saw a few people I knew from other places. As soon as he got on stage, David gave a shout-out to Truth Seekers North East and they are all delighted by such an endorsement. The format of David's talks has changed. He has gone from the all-day twelve hours to an evening of four and a half hours, with a single break of just ten minutes. He covers a lot of the same material that he has done before; this is to be expected because his live shows, like his books, are intended to be self-contained. He has updated his repertoire with new information and uses different metaphors and terminology. For instance what he used to call "the hassle-free zone" he now calls "the postage stamp consensus". The first two thirds of the event were the bad news and the last third was the good news; this is a hallmark of his style that has been around since he first went conspiratorial in the early 1990's. He still wears the trademark blue shirt which has become as much a motif as Andrew Johnson's fleece. He closes his eyes a lot while talking and I wonder if he is channelling. All in all, this event was another triumph for David Icke. I felt informed and inspired as I do at every one of David's shows. No SJW's turned up to ruin it. Straight after the event he headed off to for the next stop on his tour. He is accompanied by his roadies, his son Jaymie and his girlfriend. Thanks very much to David, his team and Truth Seekers North East for such a wonderful evening.
See here for more information: https://hpanwo-voice.blogspot.com/2016/09/richplanet-show-about-david-icke.html.
And: https://hpanwo-voice.blogspot.com/2016/09/richplanet-show-about-david-icke.html.
Posted by Ben Emlyn-Jones at 21:24

great news! I didnt know about Truth seekers North East, I live in Edinburgh at the moment, can I join?

Hiya mate, isn't David doing well for his age, what is he 75 now, he certainly doesn't look it. Still, take David out of the equation and I suppose you are the most important alternate speaker in the UK at present.

Thanks, Jah, glad you think so. David is 66 though. Don't tell him you mistook him for 75!

Haha, you are deeply in love with Macron and Trudeau, Mr Lefty. (so I heard from all at Lytham)

"Lefty"? I thought I was supposed to be a "Nazi fascist!" I can't be both. Get your insults consistent please, trolls!

Haha Ben the only thing worst than being a "nazi fascist" is being a fascist nazi! I have followed you for a while and I'd say you are moderately right wing like myself. Possibly the Norm Tebbit side of the Tories and the Trump side of the GOP. Nowt wrong with that. I'm for Trump, Tory (Mogg) and Brexit. I live here but my daughter lives in Texas so I spend about four months of the year in the US. I'm off there next week in fact. I'm a retired engineer, I have high blood pressure and the work shy smelly lefties would no doubt call me "gammon". Well I'll wear my gammon face as a badge of honour! Cheers now. Bob

Ok, you are generally right leaning. Who calls you a Nazi fascist BTW? You are just radical that's all.

John and Bob. I would say I'm probably a centrist. I am not anti-left, in the sense that I support many lift wing ideals such as the NHS and an end to workfare. However, the left is the main tool being used by the NWO today, especially in psychological terms. I support Trump and Brexit as deviations from the plan laid out by the Illuminati. I know many disagree with me and I think they're wrong.