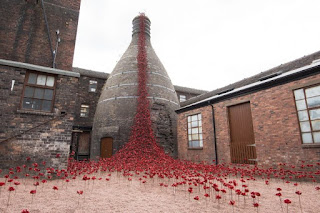 Weeping Windows is an exhibition by Paul Cummins and Tom Piper. It is made of thousands of ceramic poppies emerging and pouring out of the chimney of the famous Middleport Pottery in , see: https://www.1418now.org.uk/commissions/poppies-weeping-window-middleport-pottery-stoke/. It resembles another larger work by Paul Cummins at the that I've mentioned before in the background links. These works of art look like blood flowing. The former is intended to commemorate the first centenary of Armistice. This took place one hundred years ago this coming Sunday, at on , "the eleventh hour of the eleventh day of the eleventh month". The ceasefire endured and the war was formally ended the following June at the Treaty of Versailles. Since then Armistice Day has been celebrated in the , and Commonwealth every year; and the Sunday closest, the second one in November, is Remembrance Sunday in . The Great War, or First World War, was by far the most terrible war the world had ever seen and, in terms of military losses, it still is. The true death toll is argued over and it ranges from about twelve to eighteen million. The horrific irony is that historians are still not sure exactly why it happened. As the comedian Robert Newman jokes, it surely wasn't just about the assassination of Archduke Ferdinand. "Nobody is that popular!" see: https://youtu.be/GIpm_8v80hw?t=642. The peaceniks of the 1960's used to say: "What if they had a war and nobody turned up?" Another catchphrase might be: "What if they had a war and nobody paid for it?" The only reason the Great War could take place, and indeed any war can take place, is money. As David Icke among many others has pointed out, both sides in the war were funded from the Bank of England, see: https://www.youtube.com/watch?v=kfgeDgfk0iE. In fact it has been calculated that without the abuse of finance, wars on the scale of World War I could never happen, they would simply be too expensive. The pattern Icke talks about continues down through history with World War II and the way Adolf Hitler had connections to British and American bankers, and also the covert support for the Soviet Union that Anthony Sutton has discovered which makes a mockery of the entire Cold War, see: https://hpanwo-voice.blogspot.com/2017/06/national-suicide-by-antony-sutton.html. Nobody wants wars, but we keep getting them. Why? There are many reasons, and I go into detail about them in the background links; but one of them, the most sickening and frightening, is occult. This counts especially for the First World War. One of the reasons it took place was for a Satanic Illuminati sacrifice, the blood sacrifice of millions of young men. A century later it is still going on. Let the world know the truth this Armistice centenary so that it can end and no such evil can happen again.
See here for background: https://hpanwo-tv.blogspot.com/2011/11/remembrance-sunday.html.
And: https://hpanwo-voice.blogspot.com/2014/12/the-christmas-truce-100-years-on.html.
And: https://hpanwo-tv.blogspot.com/2017/02/did-britain-start-world-wars.html.
And: http://hpanwo-voice.blogspot.com/2014/08/world-war-i-centenary.html.
Posted by Ben Emlyn-Jones at 21:17

What was the point of the massive blood sacrifice? Surely there was a point to it?

Come on, chum, that's not really an adequate answer. Very, very disrespectful to the millions who lost their lives so you could say that. But as Voltaire said...

Hi Ben. Yes I've googled it but a lot of cranky stuff on Satanism and blood sacrifice. None of the sites say why the blood sacrifice of 20 million men was required. Wilf

Jacob, would it be more respectful for me to remain silent and let more soldiers die for no cause in the future?

Wilf, did you read anything about blood symbolism?

Ben. Yes it mentioned it but not a coherent reason anywhere for this "sacrifice". I'm not buying it unless there is a compelling argument. Wilf