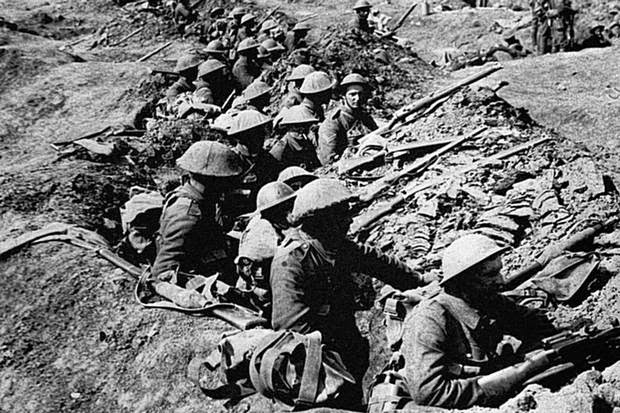 It was at on that formally declared war on . What was to follow in the succeeding four years, three months and seven days was the most destructive conflict in the history of the world, at least in purely military terms. By the time it was all over more than sixteen million soldiers had been killed and millions more maimed, both physically and mentally. The entire world was exhausted and traumatized by what became known as the Great War... before World War II broke out in 1939. The Great War changed the world like none other before it or since; to this day the names of places like , , the and raise instinctive feelings of tragedy and loss. Before this the idea of being anti-war was considered a disgusting perversion, a moral weakness, an act of treason or even some kind of mental illness. Afterwards everybody at least sympathized with that position. It also raised the point that the argument against war was no longer merely an ethical one; it was a purely practical question. We had become simply too good at killing each other for war to ever achieve anything productive. The Great War involved the use of new kinds of destructive military technology such as the aircraft, the tank, the machine gun, the submarine and what we today call weapons of mass destruction. When these weapons had been invented, all within a decade or two earlier, they had been described as the method to end all wars because their deployment would be invincibly catastrophic to both sides; this was the exact same justification for the nuclear arms race during the Cold War. The Great War called into question a lot of concepts that had up till then been essential, such as fighting in wars made you a brave hero, that patriotism was the most divine emotion, and even whether God was good. To join the armed forces before that time was considered to be very noble and manly. Soldiers were synonymous with the warriors of fiction and mythology, chivalrous and virtuous men who wielded swords against the forces of darkness. But after World War I many people instead remembered the lines of robotic smartly-uniformed troops marching diligently in formation towards their demise in the jaws of the mechanical meat-grinder of steel, explosives and chemicals, and compared it more to a line of farm animals entering a slaughterhouse. Where was the heroism? The honour? The decent cause of fighting for good against evil? It was what the philosopher Julius Evola called "the war of the ants". The supposed evil was the British media portrayal of , with comic strips featuring demonic caricatures of the German leader Kaiser Wilhelm, who ironically was a cousin of King George V of . The war started quickly, within a few weeks during the "July Crisis", but the event which triggered British involvement was 's invasion of . The press reported that when the Kaiser's troops entered the city of they took all the young babies from their mothers' arms and impaled them on spikes. These spikes they then carried as they paraded triumphantly around the streets. This story was a complete fabrication, but by the time this was realized it was too late; it had done its job. The troops were motivated with a bloodlust for Germans. It's not unlike the "baby incubator story" in which led to the "highway of death" in 1990, see: https://www.youtube.com/watch?v=LmfVs3WaE9Y.

The question of why the Great War started is extremely nebulous. The facts have been submerged by a century of black propaganda, from all sides. If you ask most people on the streets they will probably tell you that it was caused by the assassination of Archduke Franz Ferdinand, heir to the throne of the Austro-Hungarian Empire, but as the comedian Robert Newman hilariously puts it, "nobody is that popular!", see here at 10.38: https://www.youtube.com/watch?v=2DCwafIntj0. As with most major wars, its origins lie in the squabbles between the more junior echelons of the elite bloodlines who are all fighting for the best spot on the New World Order starting grid. Their rulers in the high Illuminati are content to allow their princelings a long leash when it comes to internal bickering, so long as neither side forgets who's really in charge and to what agenda their ultimate loyalty lies. The dominant financial and industrial class made an absolute fortune off the war, as they always do. Both sides in the war were funded by the Bank of England through its agents in , and the Central Powers. What is now called the "military industrial complex" set up huge munitions factories and production lines for vehicles, rifles and uniforms etc; these were mostly run by women because the men were all busy getting blown up by the very same weapons their wives, mothers and daughters were building. At a higher level war is necessary for psychological and cultural purposes. As George Orwell said in 1984, "wars are not intended to be won or lost, but to be continuous". Constantly recurring wars, and the threat of war in between them, is for some reason a quintessential factor in our relationship with our rulers. Without war they could not rule us; it's that simple. Report from Iron Mountain is another important document because it discusses the possibility of abandoning war and concludes that it would be a mistake to do so without some kind of "replacement". See here at 1.13.02: https://www.youtube.com/watch?v=bdWp6LWADZU. War is also very powerful on a spiritual level, in terms of the occult. It is seen by many in the upper ranks of the elite as a black magick ritual, a mass human sacrifice and the poisoning of the Earth's environment as well as the human spirit. However all of this pernicious and contemptuous horror is dependent on one thing: human ignorance and compliance. Without them the entire structure of violence and tyranny will fall apart like a house of cards. Therefore it's vitally important to inform the people around you of this information as much as you can, and also encourage them to take action on that knowledge. The Great War now happened a hundred years ago, lets make sure that by the time two hundred years have passed there hasn't been another; the same goes for three hundred, four hundred and a thousand.
See here for a related article: http://hpanwo-voice.blogspot.co.uk/2011/05/charles-choules-dies.html.
Posted by Ben Emlyn-Jones at 14:55

Hello Ben. Thank you for an interesting informative article. I think the military religion as you rightly and constructively describe it is a similar anomaly found in a few other areas, specifically here it seems that not only is it a way of excusing the manipulation of life by the elite for agenda's but is is also by those who enjoy being the 'opposition'. There should be no enjoyment or prestige in having to be in the opposition be it military or even in the Truth or Enlightenment movement where we find people who become attached to the prestige of being an oppositional instrument which if not addressed becomes a conduit for dual premise and a cause for contradiction. The very fact we have to be in such a position is nothing to quantify with prestige and even worse to use it to remember the millions of predominantly working class (there is no class system its a concept used to control us and prick the narrow gates of aspiration) who lost their lives. These type of individuals do not realize the talisman like power of the Whip, the Whip that when used against us causes us to shout 'it's not fair', 'we are being oppressed' etc yet when they get hold of the whip they in turn use it against another. Defensive antagonism cannot be forgiven before being turned upon the inner most core of our inverted beings otherwise it is a vunerable luxury. Thanks again

It is very sad that generations of working class men are sent to their deaths war after war. We are exposed to the blatant indifference to the plight of these men as much as the Palestinian children and the general pro-Israeli stance that exists under the vaneer of the pretense of being offended in awkwardness that exists in the upper elite echelons, at exactly the same time that the so called working class is being brainwashed by the political-military-state to eulogise the 1914-1918 holocaust perpetuated through them in World War I and beyond. We must not forget that in order to show Nazi's and the USSR where they stand nuclear bombs were dropped on Japan killing hundreds of thousands and horrificly mutating/burning others, of coarse, this non european target would be more 'desirable' than dropping on a prodominantly white European counterpart. The impoverished and manipulated otherwise known affectionately by the elite as the 'working class' must free themselves from branding and brainwashing that happens through historical events, not in spite of them. My Grandfather was a pilot in world war 2 but he was not conditioned by the religion of the eulogised military which has it's basis imn division and prestige in being the mighty opposition defending our fears and anxietys of a state that actually cares little for us, the very same state that offered no support in his old age, dying penniless in a tower block in Birmingham.