Chris Spivey Arrest- Who's Next? 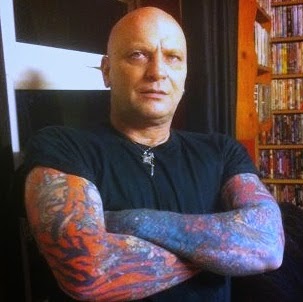 The well-known conspiracy researcher Chris Spivey was arrested last Wednesday in the early hours of the morning. His daughter and one-year-old grandchild were in his house at the time and this violent state intrusion disturbed them enormously. The supposed reason for his arrest was suspicion of "harassment"; luckily he was released soon afterwards. The source of this suspicion was probably a small article in The Sun which described Chris as a "crackpot web troll" who was "waging a warped hate campaign". As far as I can see, this "harassment" consisted of a series of articles on his website like this one: http://chrisspivey.org/mugged-off-just-sayin/. What Chris has done is analyse the Lee Rigby murder logically, without the blinkers of media propaganda or the fervour of the Military Religion. He's a severe and plain-speaking man with very little sense of diplomacy, but there's nothing wrong with that; it's just his style. In this series of articles we see that Chris has done some excellent and painstaking research to uncover the suspicious inconsistencies and anomalies in the official story of how Lee Rigby died. Here's a more recent posting where he explains how the CCTV record of the murder makes no sense and evidence has been withheld, see: http://chrisspivey.org/court-in-the-act/. Is this "harassment"?

No it's not; it is a man expressing an opinion on the internet. According to The Sun article a member of Lee Rigby's family called what Spivey does "vile nonsense!" Well I consider this to be vile nonsense: https://www.youtube.com/watch?v=2Tlm9Rm5cnE. So would the police please go and raid Mr Netanyahu's house at tomorrow morning? Chris Spivey's arrest is just the latest in a series of attacks against people who question the Lee Rigby murder. Last year Richard D Hall had his Richplanet TV series dropped from the Showcase Channel 191, see: http://www.richplanet.net/starship_main.php?ref=168&part=1. This was because a viewer wrote in about an interview Richard did with Nick Kollerstrom in which they expressed doubt over the official story of Lee Rigby's killing. The viewer found the show "offensive!" What's happening here is a growing precedent. It could continue; other people could be arrested or persecuted in other ways. This includes me because I agree with a lot of Chris Spivey's views on Lee Rigby, see: http://hpanwo-voice.blogspot.co.uk/2014/02/lee-rigby-patsies-get-life.html. Some people have told me what I wrote was "offensive!" In fact I've lost friends over it, even within the Truth movement. All the usual restraints of rationality and due process are thrust aside when it comes to Lee Rigby. This could spread to other subjects too like 9/11, 7/7, child abuse and many other matters. It's a war on common sense and freedom of speech... and we are the enemy.
Posted by Ben Emlyn-Jones at 20:02

Yes Ben, sadly we are the proverbial enemy. A sad reality is actually an equall enemy is the general public too in the sense that that do not have the capacity (not potential) to see through the elaborate vaneer of propoganda and manipulation of inner ignorance that is paradoxically sometimes obvious. It aims straight for emotional sentiment and emotional pain. The notion of free will is up for grabs, viz. the practical difference between the will grounded in the noumenon or transandental, and the will seen in its phenomenal or empirical state which is the realm in which we are bewitched and manipulated. This indeed can make it possible for further arrests but more frightningly more injustice sanctioned by the publics ignorance. What surely matters to anyone who claims to be defending the case for free-will is that considered as noumenon (i.e. our unconditioned nature)which has been suppressed and denied by Judeo-Christian faiths especially and also NWO agenda's and bloodlines which are inextricably linked as the Devil-Evil are products of the inverted/deluded mind that seeks gratification for the ego entity, so that which can initiate a new liberating and productive chain of events in the phenomenal world cannot be harnessed which ironically in itself is not phenomenal. I hope it is not a pattern that is going to start repeating frequently!. All we can do is keep planting seeds and hope nobody rips them up

In the immediate aftermath of the 9/11 false flag, skull and bones operative, bush jr. was told to say "they hate us for our freedom" that there will now be a "war on terror". Evidently, we the people are the terrorists and we are the threat that simultaneously maintains and threatens elite hegemony. I hope you're not discouraged in your endeavours in light of the horrific treatment of spivey and family. Sad to see Matt Taylor is jacking in because of this Stasi-like clamp down. Like yourself he really has the knack:
http://guerrillademocracy.blogspot.co.uk/


"I do not think that anyone would be able to class what I have written as being for any other purpose than preventing or detecting crime.
That is what I do for fucks sake."
Chris Spivey

That's right, X. We are the enemy of the NWO just like everybody else. Except we're fighting back. Nobody more so that Chris Spivey. What makes this case so emotional to so many people is the Military Religion which I've written about many times now.

True, Anon. It's a point made well by Noam Chomsky during the Vietnam war. I didn't understand what Matt meant by stopping his blog page. We need more and more people to write therm now.

Anon, Chris does indeed do that and he does an excellent job.

Agreed there is an urgency for more people to raise awareness more than there ever was. However, i understand Matt's very real concern in terms of the protection of his young daughter. I too have a young daughter. I have contemplated doing a blog but the risk is investigation with a danger of child snatching via secret courts on the slightest of pretexts. If you publicly dissent you are categorised as a "domestic terrorist".

Not to say we should simply give up and accept tyranny as it worsens but the hive mentality is so endemic it is so hard when talking to people to even accept evidence in plain sight.

Not to say we should simply give up and accept tyranny as it worsens but the hive mentality is so endemic it is so hard when talking to people to even accept evidence in plain sight.

The response to the viewer who complained of being "offended" would be to ask him if he would also like to complain to the group of doctors who question the Dr David Kelly's verdict, or to complain to the millions who believe that Princess Diana was murdered. Do those people also offend him?

I find people who claim offence are actually mistaking offence for egotism - they can't handle the fact that you have a different opinion than them. They have been told what is right and it is offensive to question their beliefs!