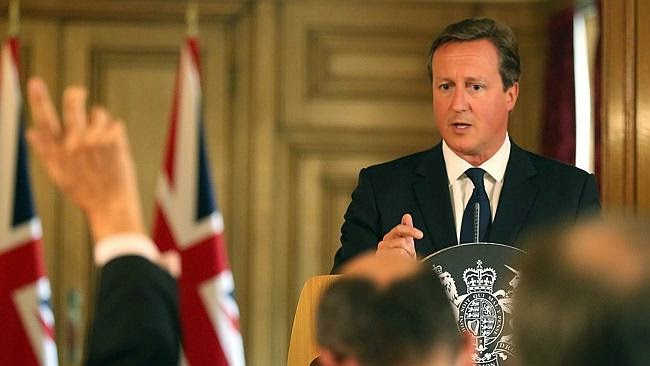 The Prime Minister David Cameron and Theresa May, the Home Secretary, have announced that the official UK government terror threat level has been upgraded from "substantial" to "severe", see: http://www.bbc.co.uk/news/uk-28986271.
Male cow excrement- thus could this article be summarized. This is pure propaganda, a publicity stunt intended to keep us on our toes. Whichever psychological think tank the government are using right now has probably detected a dropping level of fear in the public consciousness and so this sham is intended to be a booster injection. The threat supposedly comes from ISIS, an armed radical Muslim movement that appeared out of thin air in eastern a few months ago; this organization includes a large number of people who are British born and/or are currently resident in the . has taken over a large part of and and they have been terrorizing Christians, local pagan religions and those of moderate Muslim persuasions wherever they go. They drive around in brand new trucks; where did they get them from? Most shocking of all, somebody nominated as an militiaman, thought to be from , murdered the captured war correspondent James Foley. He beheaded Foley by hand and posted the video of the act online. There is some question over the truth behind that story, including allegations that the execution was faked, see: http://www.telegraph.co.uk/journalists/bill-gardner/11054488/Foley-murder-video-may-have-been-staged.html. As for the "jihadi" who allegedly carried out this gruesome killing, the news reports that "intelligence agencies are searching for him"; my advice in their quest is to check their own personnel department. Yes, is very much created, armed and funded by various major covert government intelligence groups like the CIA, MI5 and Mossad. This is hardly even breaking news; those organizations have been behind terrorism for decades. This has been the case all through the Cold War and into the War on Terror. Even Osama bin Laden, the man who didn't do 9/11, was run by a Western intelligence operation codenamed "the database", in Arabic this translates as al Qaeda. So please laugh in the faces of Cameron and May and their scaremongering nonsense. As Tony Farrell said before he was sacked from South Yorkshire Police, the principle terror threat in this country is from government false flag attacks.
See here for background: http://hpanwo-voice.blogspot.co.uk/2013/08/engineered-islam.html.
And: http://hpanwo-voice.blogspot.co.uk/2012/05/london-olympic-security-measures.html.
Posted by Ben Emlyn-Jones at 17:11

Hi Ben. Godd topical article that ties a lot of the pan-political agenda together. There seems to be a neo-jew'ing' of Muslims as a concept group, of coarse I am fully aware of some issues of division especially being from Birmingham but this phenomena is a composite add on to a modern evolution of the estrangement of young people and our so called leaders/authority and the transition of Islam into Western culture en-toto of which the generation 80's-90's are a conduit for. This transition has led to an identity crisis that has caused an almost Schizophrenic mentality with young especially Pakistani Men which of coarse manifests as anger and alienation. These current affairs latch onto this as a parasitical agenda rather than to help this transition for the benifit of society and any progressive dialogue with Abrahamic religions and as I mentioned the issue is Tribal as much as just 'Muslim' orientated. After the gross manipulation in these regions for many years by the west and ultimately with the last several years this lates terror alert on the back of the horrific yet seemingly highly convenient ISIS video has been set forth to turn the tables back to military favor. I just hope it doesent stir further tensions in the urban communities where I grew up where Whites and Blacks already have a nervous and tense relationship with the the Muslim community. Thanks for your hard work. Clarity!!!!!!

Hi again, X. I remember that Brian Gerrish very eloquently and intelligently calls Muslims "the new Jews" with good reason. Pakistanis are the prediminent Muslim national group. I live with three Sudanese men, and I think they're slightly different, although they feel enormous solidarity with anybody in the Fertile Crescent from the "War on Terror". Sudan has so far escaped the complete influence of the Saudi/CIA Wahhabist ascendancy. In Sudan you can still find the Sufi mystics dancing in circles- the whirling Dervishes. The modern empire deliberatelyt conflates Islam with Wahhabism, a dangerous delusion.

"Know that the whole world is a mirror, In each atom are found a hundred blazing suns. If you split the center of a single drop of water a hundred oceans spring forth. Everything is brought together at the point of the present". This statement sounds deeply esoteric and not the words and insight of an 11th century Sufi Islamic Poet. I posted this in reply to your comment Ben as I found it fitting. Indeed, Islam as a spiritual effort rather than the evolved 'religious' political and tribal entity is what should be re-established in the same light as all other forms of spiritual discapline etc and investigated in order for spiritual progression to fin it's source. The sufi mystics have written beautiful poetry and were often demonized for their progressive stances and maverick comments such as "There is nothing under this turban except God" spoken by Mansur al-Hallaj who was executed because of this which is actually genuine spirituality beyond religious outer adornment. The above quote has very close links with Buddhist totality (Hua Yen) for example, it is a shame that this creative emptiness cannot be rediscovered to help the polarization of humanity. Yes your Wahhabist statement is powerful and very true my friend. Take care

X that is a wonderful quote. Indeed Islam has in its mystic and non duality mode aka Sufism bought love and peace directly and indirectly to millions over the centuries. Hu.

Dear mumanisnowhere. You are welcome. If we let go of historical momentum we will find the metta narrative in the very 'present' which is true spirituality, the creative emptiness is empty of emptiness as much as materiality is empty of materiality. The greatest scientists, sages all knew this. They are mere terms, indeed the 'present' is still a concept, an old master once said "how can we attain unity by merely suppressing opposites?, when the 'one' is not penetrated the two loose their life". Take care.....

Indeed X Who are you... cognized by the empty yet relative inderdepedent consciousness that you are....you awareness just being itself ...wonderful appearing as X yet empty and relatively full of opposites :-) Your own words without quotes themselves are a master's quotes yet... 'Sagehood is an empty name' :-)

That's very true X and mumanisnowhere. Interestingly the UK Govt bl;ocked a Sufi missionary from visiting the UK, at the same time they lay out the red carpet for Wahhabist nutjobs. Says a lot that!