St Helena Airport- One Year On 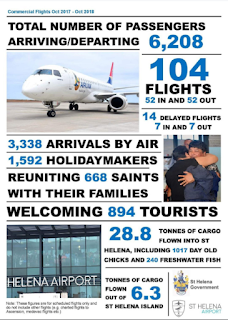 opened one year ago. I covered it at the time: http://hpanwo-tv.blogspot.com/2017/11/flying-to-st-helena.html. As you can see in the poster above, it has achieved a lot, including two flights on average every week. The number of people who have passed through the airport exceeds the population of the island by a full half. As you can see when those figures are broken down, almost three quarters of those people are visitors to the island; the remainder are natives. This indicates that I was correct in my predictions in the background links below. has indeed been opened out to the world. The island is still importing more than it exports by a factor of about four to one. It's still too soon to gauge the long-term outcome of this project, but the general mood of the Saints, based on their social media contribution, is positive. I obtained the above tableau from a Tweet by the territory's governor Lisa Honan. This is not the end of my report; I will be posting more updates.
See here for essential background: https://hpanwo-tv.blogspot.co.uk/2016/06/st-helena-airport-opens.html.
And here for futher background: http://hpanwo-radio.blogspot.co.uk/2016/11/programme-212-podcast-st-helena-airport.html.
And: https://hpanwo-voice.blogspot.com/2017/10/fly-to-st-helena-now.html.
Posted by Ben Emlyn-Jones at 21:31

Why don't you just leave them alone?

Why? Do the Saints object to my tanks driving up their beach?