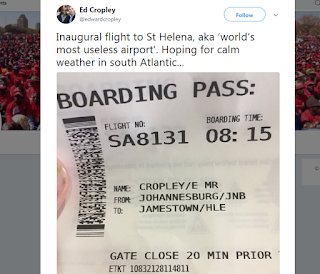 The BBC has reported that the "virgin" flight to the new airport on the has landed safely. This is also described as the "first commercial flight". This is not strictly true; there was an inaugural flight in August which I reported on at the time, see: https://hpanwo-voice.blogspot.co.uk/2017/08/st-helena-airport-maiden-flight.html. However this is the first flight in which tickets were put onto the open market. One of the passengers was a Mr Ed Cropley and he Tweeted a photo of his boarding pass, see above (and https://twitter.com/edwardcropley). Some of the other seventy-seven passengers were Saints returning home, for the first time skipping the six-day sea voyage from on the RMS; that must feel strange. SA Airlink once again used their new Embraer E190 aircraft for this flight. It took off from OR Tambo Airport in at and stopped to refuel at before setting out over the towards . It landed safely at local time (2.59 PM BST), see: http://www.bbc.co.uk/news/world-africa-41620003. The plane will return to tomorrow afternoon. I hope the tourists enjoy themselves and the Saints find this new way of accessing the outside world useful. However, the concerns I've raised in this series have not eased. Regular flights will now follow this one. If you want to go to it is not cheap; prices start at £804 and this does not include travelling to first. Probably that price will come down over time, as is often the case. See here for details: https://flyairlink.com/destinations/flights-to-st-helena and: http://sthelenatourism.com/fly-st-helena-14-october-2017/.
See here for background: http://hpanwo-radio.blogspot.co.uk/2016/11/programme-212-podcast-st-helena-airport.html.
And: http://hpanwo-voice.blogspot.co.uk/2016/12/st-helena-airport-first-military-flight.html.
And: http://hpanwo-tv.blogspot.co.uk/2016/06/st-helena-airport-opens.html.
And: http://hpanwo-voice.blogspot.co.uk/2017/03/debit-cards-on-st-helena.html.
And: http://hpanwo-voice.blogspot.co.uk/2016/10/tristan-da-cunha-st-helena-plus.html.
Posted by Ben Emlyn-Jones at 19:20

Wudya reccommend this place as a nice holiday place Ben? Nice beaches and that eh? Bet the local birds our a bit tastey. Long way to go tho mate for a week or so in the sun? Cheers pal. Baz

Hi Baz. I'd love to go there. Hope to sometime. From what I've seen the "local birds" ARE very tasty. I would rather go there by sea, but will there be a regular passenger service once the RMS is gone?