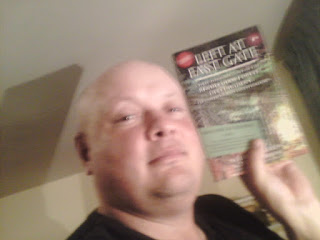 See here for essential background: http://hpanwo-voice.blogspot.co.uk/2017/10/the-larry-warren-controversy-part-24.html.
After a long lull, the pace is picking up again. It is literally just a few hours after I posted the above background article yet a lot has happened. Cosimo Books, the current publisher of Left At East Gate, posted an announcement that it was withdrawing Peter Robbins' and Larry Warren's title from sale, see: http://cosimoblog.blogspot.co.uk/2017/10/announcement-left-at-east-gate.html?m=1. The only sentence that has any meaning in this screed of bureaucratic flannel is: "...it has been brought to our attention that some of the experiences described in this book may be inaccurate or embellished." This means Peter has told them about his misgivings, the ones I disagree with and explain why here: http://hpanwo-voice.blogspot.co.uk/2017/06/the-larry-warren-controversy-part-16.html. I know several people have been trying to put Cosimo straight with the information I and many others have gathered, but they don't want to know, which means when they add: "...until the situation surrounding it has been clarified to our satisfaction." they don't really mean it. They've made up their mind. Just a few days earlier Halt in Woodbridge was withdrawn too, see: https://www.amazon.co.uk/Halt-Woodbridge-Thirty-Year-Authentic-Whistle-Blower/dp/1517447216. This is a self-published title by Peter Robbins so it must have been his own decision. With the article in yesterday's Daily Record newspaper article as well, this is starting to feel like a coordinated offensive. When this happened Nigel Mortimer posted a photograph of himself holding his copy of LAEG as a statement of support and solidarity with Larry Warren and he encouraged others to do the same. The illustration above is my contribution. The backlash I've had for doing this is worse than I expected; far more than I usually get from the articles in this series. I've had an email from somebody I've never heard of before saying: "Shame on you!" It seems that "shame on you!" is a Truth Mob cliché. I've yet to come across an example where it is not repeated over and over again by Truth-mobbers at all those #BadPeople who refuse to join them in their obsession. This reveals something about the psychology of the Larry Warren Hate Cult along with their multitude of appeasers, fellow travellers and general hangers-on. When a visual image causes more of a reaction than a factual argument then it is a further sign of their inherent irrationality.

In response to these developments, Larry Warren has issued a public statement about his book:
"Statement regarding the suspension of the book Left At East Gate by its publisher Cosimo Books, .
When I began the process of writing the book that would eventually be called Left At East Gate in 1986, my sole aim was to bring attention to the very real events of December 1980. I eventually brought in a coauthor by the name of Peter Robbins. After eleven hard years, and too much money to mention spent, I was and remain proud that: 1. I was able to get it published in the first place. 2. I am also proud that the book was and remains the TRUE story of how these very real events became public knowledge. I wish to thank Whitley Strieber for encouraging me as early as 1985 to write my own story in book form, because as early as 1985 my story had been misrepresented in numerous books and articles. I wished only to set my record straight with the best evidence I could possibly secure; I believe I did just that.
Over the last two and a half years I have been attacked by a minority of internet-based trolls who have twisted and turned fact into fiction in such a way that most SANE people viewing their activities would run for the hills of confusion, this is understood. My former coauthor Peter Robbins last year decided, for whatever reason, to jump into bed with the trolls I have mentioned; thus I group him with them in the underhanded actions that have led my publisher Cosimo Books, New York, New York to suspend the title. Over the last two weeks I and others have been in communication with said publisher, his respond to the overwhelming evidence to the contrary has been minimal to nil. For the record I, in response to my publisher's initial message to suspend the title, told him not to bother. The book has been in print for twenty years; it served its purpose, but with the passage of time is outdated as far as I am concerned. Further to that, I informed my publisher that I would rather him drop the title altogether as I am involved in contemporary projects that I believe will take these most serious events known as the Incident forward. Also, I did not want my former coauthor Peter Robbins profiteering any longer on both mine, my family's, and honourable Incident witnesses' blood, sweat, and tears. In closing I wish to thank everyone both known and unknown that supported my efforts and the book from the start.
Sincerely Larry Warren former 81st SPS RAF Bentwaters/Woodbridge 1980/81 USAFE."
Source: https://www.facebook.com/permalink.php?story_fbid=547634625579187&id=100009979631199 (You might need to be logged into Facebook to access this page.)
The LWHC et al are greeting this news in the usual way, cheering on Cosimo for their decision and gloating all over social media about it. I would ask anybody with any remaining sense of logical and ethical standards to look at what these people are doing and think carefully about whether you really want to be a part of this, or even just stand by and let it happen without opposing it.
See here for the next part: https://hpanwo-voice.blogspot.co.uk/2017/11/the-larry-warren-controversy-part-26.html.
See here for more background: http://hpanwo-tv.blogspot.co.uk/2016/06/scottish-ufo-and-paranormal-conference.html.
And: http://hpanwo-radio.blogspot.co.uk/2017/05/programme-236-podcast-larry-warren.html.
And: http://hpanwo-voice.blogspot.co.uk/2016/09/truth-mobbed-again.html.
Posted by Ben Emlyn-Jones at 01:19