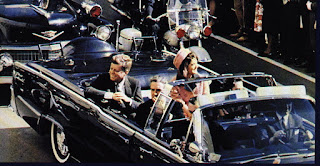 As I predicted here, see: http://hpanwo-voice.blogspot.co.uk/2017/10/trump-and-jfk-files.html, the new "top secret" files on the assassination of President John F Kennedy do not contain any information that significantly derails the official story, that Lee Harvey Oswald shot JFK of his own accord. He acted completely alone and he killed the president for purely personal motives. That being said, not every one of the three thousand-file batch has been published. President Trump has ordered that two hundred of them be kept back "pending review"... for reasons of national security of course. There are a few interesting details though, especially over suspicious elements of Oswald's life. The would-be assassin travelled to and had a meeting with a Russian who was a senior KGB official, one who was specialized in "wet work". This is what you would expect if the Soviets were somehow behind the killing of Kennedy. The CIA intercepted a phonecall made by Oswald in which the shooter-to-be spoke in Russian. This is proof that they were watching him as a potential security threat. Source: https://www.axios.com/what-we-know-from-the-jfk-files-2502308689.html. This is what one would expect, as I said in the background articles at the bottom. Oswald was a staunch Marxist who defected from the to the where he lived for several years before returning to the States and being welcomed home. You could not find a more suspicious profile of a possible secret agent, for either side. So was Oswald a mole planted by the to kill the leader of their Cold War enemy, or was he actually a CIA asset planted in to gather information for ? Whichever it was this just adds incredulity to the notion that intelligence somehow just let him slip through their fingers and onto the sixth floor of the school book depository at the worst possible moment. There's a limit on how incompetent one can be by accident. The files currently available can be downloaded from here: https://www.archives.gov/research/jfk/2017-release.

The reaction from the conspiraspherical media has been multitudinous, as expected. Luke Rudkowski of WeAreChange has made a video pulling up President Trump on his last-minute backtracking. It appears that the CIA is the final arbiter and that Trump possibly overestimated his own authority (this is the central problem of his administration in general) in his previous announcements when he stated that all the files would be released without qualification. However, why has it taken the agency over half a century to sort this out? Talk about an eleventh hour effort! As Rudkowski rightly points out, it stinks of obfuscation. According to this article on David Icke's website, this is just about the data protection of living people, but I suspect this is just an excuse by Trump, see: https://www.davidicke.com/article/434535/jfk-files-names-living-people-need-removed-release-trump. It turns out that J Edgar Hoover, head of the FBI, understood the need for the public to believe Oswald acted alone, whether or not he actually did. Source: https://www.youtube.com/watch?v=Fcpl7Lm6vAI. Linda Moulton Howe has spoken about the work of the late great Jim Marrs that provides evidence that the CIA decided to eliminate Kennedy because he had the wrong attitude to the UFO issue. JFK wanted to involve the in a joint effort to deal with it. This would have put the entire Truth Embargo under threat, see: https://www.youtube.com/watch?v=aY3GdBh_efA. Alex Jones has gone back to his roots by covering the JFK issue from a refreshingly conspiratorial angle. Since he joined the Alt-right Jones has tried hard to recant the tin foil hat-wearing adventures of his youth, see: https://www.youtube.com/watch?v=Y9P2Bxgt7mw. (There was an amusing moment a few months ago where his past caught up with him, see: http://hpanwo-voice.blogspot.co.uk/2017/07/child-slavery-on-mars.html.) What is clear is that the government is still desperately maintaining the same stance it has since the Warren Commission. The best we can hope for is that they will fall back on the possibility that Oswald was influenced by Soviet intelligence. There may even be a new inquiry. The truth, the direction the real evidence leads, is that President Kennedy was killed by the deep state in a highly organized assassination using the typical methods of the CIA. This truth will be proven one day, but that proof will never be given up willingly.
See here for background: http://hpanwo.blogspot.co.uk/2013/11/the-kennedy-assassination-50-years-on.html.
And: http://hpanwo-radio.blogspot.co.uk/2013/11/programme-68-podcast-jfk-special.html.
And: http://hpanwo-radio.blogspot.co.uk/2016/02/programme-176-podcast-mark-r-goode.html.
And: http://hpanwo-voice.blogspot.co.uk/2014/03/bobby-kennedy-two-gunmen.html.
And: http://hpanwo-voice.blogspot.co.uk/2014/05/marilyn-monroe-was-murdered.html.
Posted by Ben Emlyn-Jones at 17:45