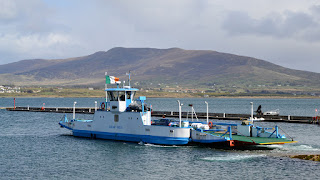 One thing that interests me enormously is synchronicity. Sometimes little things happen to me that make me feel as if the universe itself, or God if you prefer, is trying to tell me something. Often it is a message of hope and optimism at a time when I feel both those things slipping away from me. My last full day in portering is a good example, see: http://hpanwo-tv.blogspot.co.uk/2012/01/ben-civilian.html. I can think of many other instances. Something like that has happened again today. Last week, after I finished my article on the last voyage of the RMS St Helena, see: http://hpanwo-voice.blogspot.co.uk/2018/01/goodbye-rms.html, I remembered something from my past that gave me similar feelings that I should have added to the article and I made a note to bring it up in a future post. When I was a child, my family used to spend every summer holiday at my grandparents' home in the . They lived in a town called Mook which was on the banks of the river or . This was a very wide river and a ferryboat linked Mook to the town of on the opposite bank (If you don't speak Dutch you will probably pronounce these names wrongly). For me, as a young boy, the ferry was an object of wonder and delight. She was a roll-on-roll-off pontoon ferry with two ramps and gates at each end and a conning tower on one beam. She could hold half a dozen cars with space for foot and cycle passengers at the side. The journey across the river only took about two minutes, but it thrilled me. It was symbolic of the experience of being with my Dutch family. Sometimes we walked, sometimes drove and occasionally rode bicycles. The ferry was called God Met Ons III which means "God is with us, the third". Then, one year, we turned up and the ferry was gone. I was devastated. I was a fairly sentimental boy by nature, but I surprised myself by how upset I was. We soon found out the reason; it was because a new bridge had been built at Haven Cuijk and so the ferry was no longer needed. My father has always been extremely pragmatic; today he is a staunch Remoaner. At the time he tried to pacify me: "I'm afraid that's progress, Ben. You just have to accept it." I recall imagining a story about the ferry crew refusing to give up their vessel. I was very sad for the entire holiday. I remember taking a cycle ride with my dad and brother and being unable to enjoy it because I was grieving for the ferry. For me the right thing to do would be not to build the bridge at all just so that the ferry could stay. That made sense to me. There is a part of me that still honours those priorities. This is why I felt as I did about the RMS.

I always assumed that the ferry had been dragged away for scrap, as the RMS might, but I never heard any more about the matter until this very day. Then, as I was recording Programme 24 of Third Rail Radio, see: http://hpanwo-radio.blogspot.co.uk/2018/01/third-rail-radio-programme-24.html, the subject came up where I was doing a segment on the RMS and I decided to Google the name "God Met Ons" just see what I could find. I was astonished to see several photographs of the old Mook-Katwijk ferry, recent pictures too and not from the river crossing. I visited the pages and realized to my joy that the old God Met Ons III is still afloat and in service. She was never scrapped at all! However she is no longer in the , she is in . She crosses the channel between Knightstown and at in , see: http://www.valentiaisland.ie/life-business/valentia-island-car-ferry/. Funnily enough I have been to twice and wanted to go to , but was thwarted on both occasions. The first time I had to lend my friend money and ran out of funds; the second time I went with a man from a local pub and fell out with him soon after we arrived in Dublin. If I had got there I might have discovered the happy truth earlier. I don't know how God Met Ons III managed to end up on the west coast of . I'm in touch with the crew in her Facebook group so hopefully they'll fill me in. The faithful old ferry is due to be replaced; she was launched in 1965 so she's had a good innings. I was just really happy to see her again. This uplifted my spirit at just the right time when I needed it. Other things have happened recently that have got me down, see: http://hpanwo-tv.blogspot.co.uk/2017/12/is-there-any-hope.html. Maybe this was another message of comfort and support from God, or the universe, or whatever you want to call it. It is telling me: "Don't give up!" I'm reminded of Dr Joe Dispenza in the brilliant film What the Bleep Do We Know!? where he says: "I wake up in the morning and I consciously create my day the way I want it to happen. When I create my day and out of nowhere little things happen that are so unexplainable, I know that they are the process or the result of my creation. I say, 'I'm taking this time to create my day. Show me a sign today that you paid attention to any one of these things that I created, and bring them in a way that I won't expect, so I'm as surprised at my ability to be able to experience these things. And make it so that I have no doubt that it's come from you,'." Source: https://www.youtube.com/watch?v=G5nqMjPJhlA. I had another piece of synchronicity just a few days ago too. I was walking along trying to think of a name and suddenly it was right in front of me as a line of graffiti on a metal rail. It easy for a skeptic to write these events off as coincidence; but, as I explain here, that is a fallacy, see: https://youtu.be/ljglQk1umvI?t=47m1s. I believe what happened today was a genuine piece of synchronicity. Whoever you are, thank you. Thank you so much.
See here for more information: http://hpanwo.blogspot.co.uk/2011/03/findhorn.html.
And: http://hpanwo-tv.blogspot.co.uk/2010/07/ben-goes-on-tor.html.
And: http://hpanwo.blogspot.co.uk/2008/06/now-thats-weird-conference-2008.html.
Posted by Ben Emlyn-Jones at 20:22

Shouldn't be no more then five minutes my friend. Here, you're an Aberystwyth boy you like like this little joke. It is illegal to take photos of clouds directly above Buckingham Palace. What do I mean? Well if you take photos of clouds above any government building it is illegal I didn't know that. Better be careful these, can't go for a cuppa without lefties annoying us these days. It was just a joke, don't wreck your...oh. Hey you've left your book JG Ballard's The Kindness of Women. I can read this then thank you. What a nice man don't you agree. I have a nut allergy and doctor said I should just avoid the wall faces trying to eat me when I next ave a walnut. On holiday this year, they say Uruguay is nice in the late summer.

Hi Tibbs.
Thanks for the info. I didn't know that. I expect it's illegal because people might notice the chemtrailers don't spray there.
Ben

Your mind truly astounds me. I love you just for your intellect alone. I think the universe is a living conscious organism, and you're right that this ultimate consciousness is also known as God. Yes synchronicity exists as part of the neural pathways of the creator's grand plan. There are no such things as coincidences. Only the vulgar science brainwashed vulgar skeptic would use that argument. Men like us Ben face that battle everyday with earthbound primitive fools. You are braver than I however. You are a truly Neitszchian man. An ubermensch. Lonely are the brave Ben. Please don't ever change. Stay strong, stay beautiful.
Fraternal greetings,
Raymond

Would you like to give a speech at a Fisherman's Wharf in Hasting in April. I am Sy from the Corpex Tunnel Dichotomy and I am seeking out up and coming speakers especially those who have a vast knowledge of UFOs and Roswell (it was your books that inspired me to contact you, they blew my mind BTW). Anyway, let me know if you are interested we pay good money.

Hi Sy, Yes sure, if it's not at a time when I'm speaking elsewhere. Pleas email me at: bennyjay74@gmx.co.uk

Hi Ben, yes I will do. Just to let you know this event won't take place till mid-september at the earliest so you will have plenty of time to prepare. Purely for your interest the gent who writes the patient/clinician information leaflets for antidepressants and vaccines is expected to speak about the future of nanotechnology. Will be interesting and shows the kind of people we are attracting. I will be in touch very soon.

Hiya Ben,
Would you be happy to speak alongside various doctors, mainly psychiatrists many of whom advocate a new mood stabilizer that is still under wraps so to speak. Well it is TBC-98244-b. It will work like lithium carbonate but with fewer side effects. I know you want to curtail the suffering of bipolar patients and sometimes they have to take very heavy meds to avoid the symptoms of the disorder. Also we believe we have found a vaccine for schizophrenia but this is still in the lab and will be for 10 years or more. But Ketamine is close to being approved as a drug for depression. We really want to open a new world to psychiatric meds and I hope you will be part of this, too. We believe your insight into UFOs will help us explain our past as much as our future. Also we could sponsor your trilogy and any other books you wish to write.

Hi Sy.
Sure, I'd be happy to speak alongside those people. However, I'm yet to receive an email from you. Also I Googled the new mood stabilizer and it came up a blank. It is obviously so still under wraps that literally nothing about it has been published. I therefore wonder why you are speaking quite openly about it in a blogsite comments box... Perhaps you could provide me with more information via a link. I look forward to email correspondence with you too.
Best wishes.
Ben